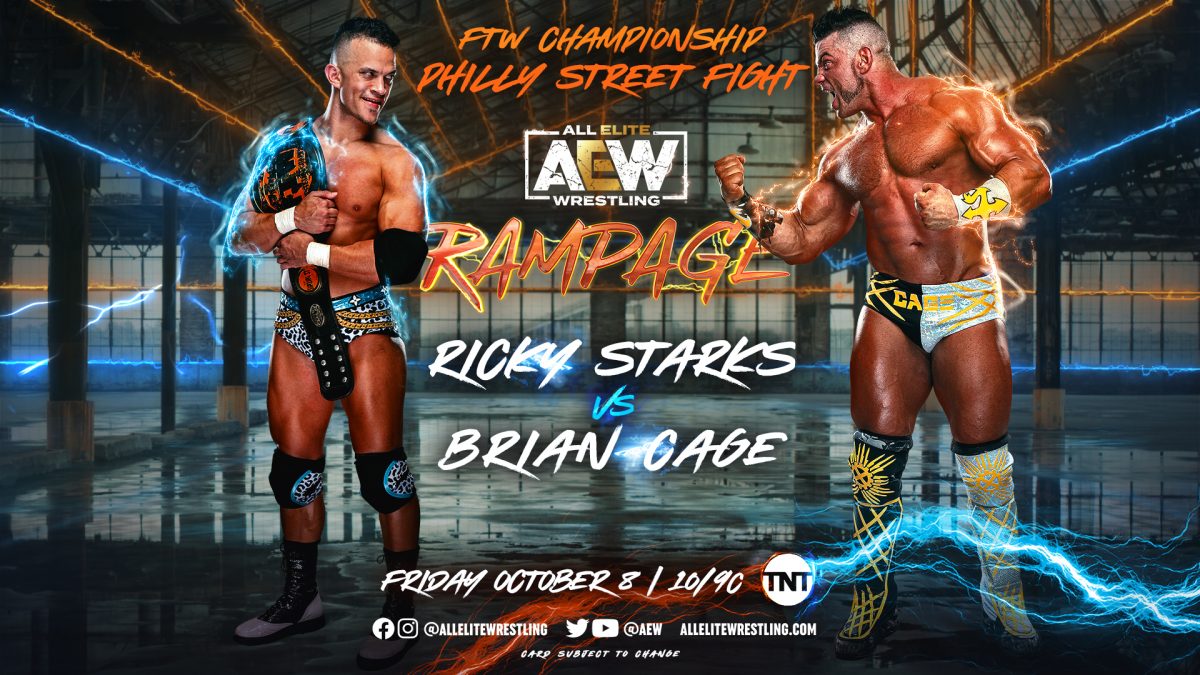 “You tried to jump me in Chicago, I’m going to end it in Philadelphia.”
The final words from @CMPunk before he takes on @GarciaWrestling NEXT on #AEWRampage – Tune in NOW on @tntdrama pic.twitter.com/QaPnRKoXbV

They kick it to Mark Henry, who is standing by for his traditional pre-main event split-screen interview, however this time for the opening bout this week.

With that said, Team 2point0 and Daniel Garcia explain why they decided to attack CM Punk in his hometown of Chicago.

Henry then asks what his approach for his match against Garcia tonight is. He says he wouldn’t of been fans of these fake Nasty Boys as a kid. He says luckily he won’t judge Garcia off of that, but instead his wrestling skills. He vows to make them pay for attacking him in Chicago.

“Cult of Personality” plays and out comes CM Punk for tonight’s opening match. He kneels down and combs the ground before checking his watch and informing us that it is, in fact, clobbering time!

With “The Best in the World” settled into the ring, his music dies down and then the theme plays to bring out the trio of Team 2point0 and Daniel Garcia. Team 2point0 take their place at ringside while Garcia settles inside the squared circle.

The bell sounds and we’re off-and-running with our first match of the evening. We see Punk jump off to an early offensive lead. He dominates the action from the word go, taking it to Garcia as Team 2point0 keep trying to give him advice in between spots.

Punk gets Garcia on the mat and locks in a leg submission attempt. Garcia makes it to the ropes to force the hold to be broken. Garcia backs Punk in the corner but doesn’t give him a clean break. Instead, he chops him. Punk no-sells it and slaps Garcia down to the mat before scooping him up and bodyslamming him — twice.

Garcia catches Punk with a back-elbow and then puts the boots to him in the corner. Punk then catches Garcia charging at him with a back-elbow of his own. He hoists him up for the GTS, but Garcia escapes with the help of Team 2point0. They attack Punk behind the ref’s back, with all three working over the knee of “The Best in the World” just as we head to a mid-match, picture-in-picture commercial break.

We’re back from the break and we see Garcia working over Punk’s softened up leg in the middle of the ring. He continues to dominate the action for several minutes until finally Punk catches him coming in after he took too long to taunt Punk and the fans in Philly.

Now both guys are going blow-for-blow in the middle of the ring trading strikes, with the crowd reacting favorably when Punk lands and negatively when Garcia does. Punk ends up dropping Garcia with a roundhouse kick for a near fall. Punk hits a Pepsi Twist that brings the crowd alive again, and they begin chanting his name.

Punk stays fired up and hits a big dive onto all three guys on the floor. He springboards onto Garcia back in the ring and then follows up with a big piledriver. He locks him in the Anaconda Vice on the mat and Garcia taps out.

.@MattSydal isn’t buying what #LioRush (@TheLionelGreen) is selling to #DanteMartin, but a match with @CMPunk?…he’ll take that! #AEW GM @TonyKhan has made it OFFICIAL: Matt Sydal vs CM Punk next Friday on #AEWRampage LIVE on TNT from MIAMI! 🎟 – https://t.co/UN1cNj1kQq pic.twitter.com/tCfAarfCCB

After the match, Excalibur sends things back to Tony Schiavone, who is with Dante Martin, Lio Rush and Matt Sydal. Sydal tells Rush he sounds nothing more than a junk-bonds salesman. Lio tells him what he and Dante have is real. What he is selling to him is real. He says it seems Sydal is the only one in this group that needs to prove their value. He suggests he get a match with CM Punk next week on Rampage. Sydal says if he can do that, he’ll prove he’s the type of investment that can make moments. Rush tells him it’s happening so be ready.

After the segment ends, Excalibur informs us the CM Punk vs. Matt Sydal match is confirmed for next week’s Rampage. Once this wraps up, we head to another commercial break.

Before the bell even sounds, Bowens and Caster attack Penta and Fenix from behind as they were getting into the ring. They beat them down on the floor and then once they return inside the ring, the bell finally sounds to get this one officially off-and-running.

Now that the match is legally underway, the titles are on-the-line and we see Penta and Fenix immediately take things over from an offensive perspective. They hit some nice double-team moves that gets the Philadelphia crowd on their feet and then they go for a big dive but end up diving into a shot to the head with a boombox from Bowens.

The Acclaimed take over on offense from here and now we see them hit some double-team moves as they have Penta isolated in the ring and on their side of the ring, which they keep cut off to keep him from making the badly needed tag.

This doesn’t last long, however, as the champs fire back up and take over the offensive momentum. They hit some spectacular double-team high spots and then finish off the duo with an assisted piledriver on Bowens to retain their tag team titles, and keep their undefeated streak in 2021 alive.

We settle back in from the break and see a video package that shows “Hangman” Adam Page’s return and victory in the Casino Ladder Match on the 2-year anniversary edition of Dynamite earlier this week.

From there, we head back inside the Liacouras Center in Philly where we hear the familiar sounds of Jade Cargill’s theme music. She makes her way down to the ring along with Smart Mark Esquire.

Cargill settles in the ring and her music dies down. Her opponent, Skye Blue, who is already in the ring, is introduced by the ring announcer, as is Cargill.

The bell sounds and we’re off-and-running with this one. Cargill dominates the action from the word go, blasting Blue with a big boot to the grill that nearly turns her inside out. Literally a minute later, she hits Jaded and picks up the easy win in this squash match.

Once the match wraps up, Cargill continues putting the boots to Skye Blue for no reason. She beats her down until finally Thunder Rosa’s theme hits and she runs out with a steel chair to run off Cargill and Esquire.

There no Brotherly Love between @starkmanjones and @MrGMSI_BCage. It’s no DQ, no countout, ANYTHING GOES in a Philly Street Fight for the FTW Title NEXT on #AEWRampage – Tune in on @tntdrama pic.twitter.com/xm8FJUba6E

Mark Henry interviews both men before the match and says it’s time for the main event.

The bell sounds and we’re off-and-running with our main event of the evening. We see Cage jump off to an early offensive lead, dominating the action with ease and outpowering the FTW champion from the word “go.”

As Starks starts to take over with a steel chair and other weapons, we head to a mid-match commercial break. As we settle back in from the break, we see more weapons have made its’ way into the mix in the ring.

Cage fires up and starts to take over. He sets Starks up for his finisher and hits it, but then Hook runs down and interferes. Cage deals with him but turns around into a big shot from Starks. Starks goes for the cover but Cage kicks out.

Starks throws a full on hissy fit after Cage kicks out. From there, Cage shifts the offensive momentum back in his favor. He side-steps Starks and stalks him, waiting for him to get up. He blasts him with a discus lariat and goes for the cover, but Powerhouse Hobbs hits the ring to break up the pin attempt.

Cage now goes to the top-rope but Hobbs gets involved, then Hook runs in again and blasts him with a low blow. Starks, bleeding from his face, pulls Cage off the top-rope for his finisher the “Roshambo” and connects. He gets the pin fall victory with all of the outside help and despite being a bloody mess, retains his FTW title in this Philly Street Fight main event.

Hobbs and Hook joins a bloody Starks in the ring to help him celebrate. Taz throws down his headset on commentary and heads down to join them in the big celebration. They head up the ramp and join Taz in celebrating as Cage is shown recovering in the ring. That’s how this week’s show goes off the air.