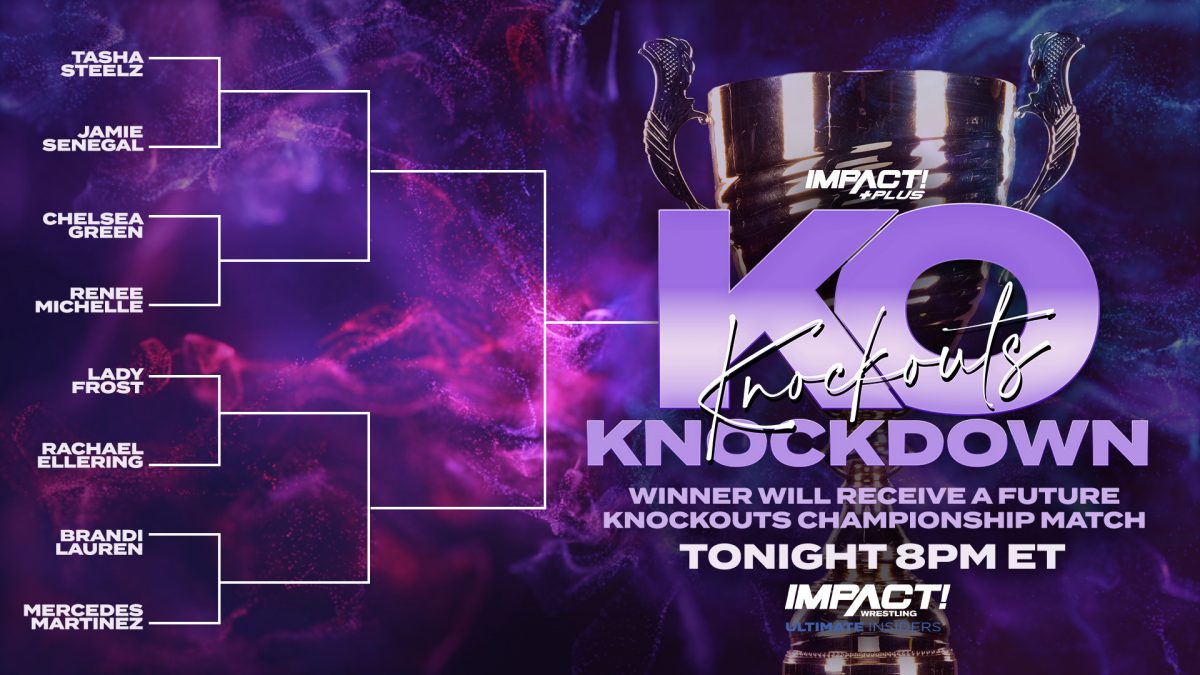 #KnockoutsKnockdown is dedicated to all the women and men who have given their passion and dedication to professional wrestling who are no longer with us today. #ThankYouDaffney pic.twitter.com/SXTlWBm4j1

Knockouts Knockdown begins with a ten-bell salute in honor of Daffney and is dedicated to all the women and men who have given their passion and dedication to professional wrestling who are no longer with us today.

The greatest women’s division in professional wrestling takes center stage – this is Knockouts Knockdown! Mickie James and Veda Scott welcome us to the event. They will be on commentary tonight while Melissa Santos returns to ring announcing.

Frost sends Ellering to the outside with a running dropkick but she comes right back with a spinning uppercut for two. Ellering counters an arm drag attempt into a senton. Frost charges into the corner with a spear, followed by a standing Moonsault. Ellering connects with a springboard spinning leg drop. Ellering avoids the Snowball Fight, then capitalizes with a spinebuster for another near fall. Ellering hits an Electric Chair, followed by the Boss Woman Slam to win!

Both women jockey for position as they lock up in the opening moments. Green hits a running shoulder tackle, followed by an arm drag. Chelsea charges into the corner but Renee sidesteps, sending her crashing into the steel ring post. Renee targets the previously injured arm of Chelsea, repeatedly slamming it into the side of the ring. Chelsea creates separation with a pump kick, then builds momentum with a series of clotheslines. Renee hits a spinning back kick but Chelsea grabs the bottom rope to break the pin. Chelsea connects with the Unpretter to score the victory!

Martinez wastes no time as she hits Brandi with a running dropkick at the opening bell. Martinez connects with a powerslam for one. Martinez continues to bring the offense but Brandi resurrects herself and chokes Martinez in the corner. Martinez quickly turns things around and hits the OG Drop to win!

Tasha uses her quickness to avoid Jamie and deliver a superkick on the floor. Tasha drives Jamie’s arm into the steel ring post, gaining total control. Jamie fights back with a rebound Enzuigiri but Tasha shuts down her momentum by trapping her in the ropes. Jamie hits a flurry of clotheslines, followed by the Osaka Kick. Jamie almost puts Tasha away with a German suplex. Tasha counters Sliced Bread into a springboard bulldog. Tasha hits her signature cutter but Jamie kicks out somehow. Tasha connects with the Blackout Crucifix Bomb for three!

Gia Miller interviews Gail Kim to get her thoughts on those who advanced to the next round of the Knockouts Knockdown Tournament: Rachael Ellering, Chelsea Green, Mercedes Martinez and Tasha Steelz. Gail says that the tournament is anyone’s for the taking and the winner will be whoever is willing to bring their A game.

Before they clash in a Knockouts Title dream match at Bound For Glory, Mickie James has handpicked Deonna Purrazzo’s opponent tonight – Masha Slamovich!

Purrazzo overpowers Slamovich in the early going, leading to multiple pinning predicaments. Slamovich builds momentum with a belly-to-belly suplex, causing Purrazzo to retreat to the outside. Slamovich soars through the air, colliding with Rehwoldt on the floor. The distraction allows Purrazzo to regain control as she begins to target the arm of Slamovich. Purrazzo locks in a submission but Slamovich fights her way to the ropes. Slamovich quickens the pace, hitting a running spin kick for two. Slamovich drives her head-first into the mat but Purrazzo kicks out at two. Purrazzo locks in Venus De Milo to win by submission!

Martinez and Ellering shake hands to kick off the semi-finals. It’s a stalemate in the early going as both Knockouts match each other’s offense. Ellering hits a running clothesline but Martinez bounces back with a big boot. They exchange shots on the apron where Martinez gains the upper-hand with a spear. Ellering counters the Fisherman’s Buster into a pump kick for two. Martinez hits a twisting neckbreaker out of the corner for another near fall. Ellering connects with her signature springboard leg drop. Moments later, Ellering almost puts her away with a spinebuster. Ellering hits the Boss Woman Slam but Martinez rolls out of the ring to prevent the pin attempt. Martinez hits the Fisherman’s Buster, then locks in the Guillotine to win by submission!

Gia Miller interviews Chelsea Green ahead of her Knockouts Knockdown Tournament semi-final match against Tasha Steelz. Chelsea says that the key to victory in a tournament is not overlooking your opponents.

The action is fast and furious from the opening bell as both Knockouts exchange multiple near fall pin attempts. Tasha extends her hand for a handshake, baiting Chelsea in for a kick to the stomach. Chelsea regains control with a hesitation dropkick, sending Tasha to the outside. Chelsea soars through the air with a Top Con Hilo. Chelsea goes for another dive when Tasha cuts her off in mid-air with a forearm shot. Both Knockouts are down after in-sync headbutts. Tasha avoids a stomp, then hits a cutter on the apron. Tasha hits the Blackout Crucifix Bomb for two. Chelsea comes back with the Unprettier for another near fall. Tasha counters a super Unprettier, then follows up with the Frog Splash to score the victory!

Mercedes Martinez declares victory in the Knockouts Knockdown Tournament during an interview with Gia Miller.

Wrestling icon @MeanQueenK will be inducted into the IMPACT Hall of Fame at Bound For Glory. #KnockoutsKnockdown pic.twitter.com/xMDvR06Pc8

Christy Hemme announces the next inductee into the IMPACT Wrestling Hall of Fame, the legendary former Knockouts Champion, Awesome Kong! See Kong’s Hall of Fame Induction Ceremony at Bound For Glory on October 23rd. Kong is in the IMPACT Zone and delivers a heartfelt speech about opening the door for the next generation.

Taylor Wilde pays tribute to Daffney as she recalls the time they competed in the first-ever Knockouts Monster’s Ball match.

Daffney paved the way for women’s hardcore wrestling and tonight, this Monster’s Ball is in her honor. Kimber places a trash can over Savannah’s head, then hits her with a crowbar. Kimber introduces a steel chair wrapped in barbed wire. Alisha counters an Irish whip, sending Kimber head-first into the barbed wire. Alisha assaults Kimber with both Kenny and Kendra, the kendo sticks. Jordynne stacks Alisha and Savannah in the corner, then connects with running double knees. Jordynne hits a Vader Bomb on Savannah for two. Jordynne sends Kimber into a pile of thumbtacks with a Muscle Buster. Jordynne counters a DDT from Alisha, then plants her face-first into a weight. Savannah blinds Jordynne with her own weight-lifting chalk, then hits Alisha with a Full Nelson Bomb to win!

Tasha Steelz sends a message to Mercedes Martinez before they meet in the Knockouts Knockdown Tournament Finals. Tasha reminds the world that she is former tournament winner and Knockouts Tag Team Champion, accolades that will lead her to another victory tonight.

Martinez pummels Tasha with a series of forearms, followed by a delayed vertical suplex. Martinez continues the assault with one suplex after another. Tasha hits a running head scissors, followed by a tornado DDT out of the corner for two. Tasha counters the OG Drop into a sunset flip cover but Martinez kicks out. Tasha pops out of the cover and hits the cutter, but she’s too exhausted to capitalize. Tasha picks Martinez off the top with a Hurricanrana, followed by the Stratusfaction. Martinez fights back and connects with the OG Drop to win the Knockouts Knockdown Tournament!

Gail Kim awards the Knockouts Knockdown trophy to Mercedes Martinez and she has earned a future Knockouts Championship opportunity!

Video: Tag Me In

IMPACT Wrestling is incredibly proud to support @tagmeinunited – as professional wrestlers from around the world unite to break the stigma and normalize a conversation around mental health!

Professional wrestlers from around the world unite to break the stigma and normalize a conversation around mental health. The goal of Tag Me In is to empower people to advocate for themselves and support others in doing the same.

The Knockouts Tag Team Titles are on the line in your Knockouts Knockdown main event! Rosemary hits Madison with repeated lariats, then bites her in the corner. Rosemary connects with a T-Bone suplex on Madison. Madison fights out of a Samoan Drop attempt from Havok, then tags in Tenille. Havok hits her with a backbreaker clothesline combo for two. Rosemary locks in the Upside Down on Tenille. Kaleb With a K hooks her leg from ringside, allowing Madison to capitalize with a clothesline. The Influence trap Rosemary on their side of the ring, preventing her from making the tag. Tenille almost puts Rosemary away with her signature running forearm. Rosemary creates separation with a clothesline, allowing her to tag in Havok. The pace quickens as Havok hits Madison with multiple running boots. The Influence send Rosemary crashing into her own partner. Taurus and Steve chase Kaleb to the back. The Influence hit Rosemary with The Collab but the commotion at ringside has the referee distracted. Havok and Rosemary put Madison away with a legsweep spear combo to retain the Knockouts Tag Team Titles!

The IInspiration, Cassie Lee and Jessica McKay, are coming to Bound For Glory! Knockouts Knockdown goes off the air.