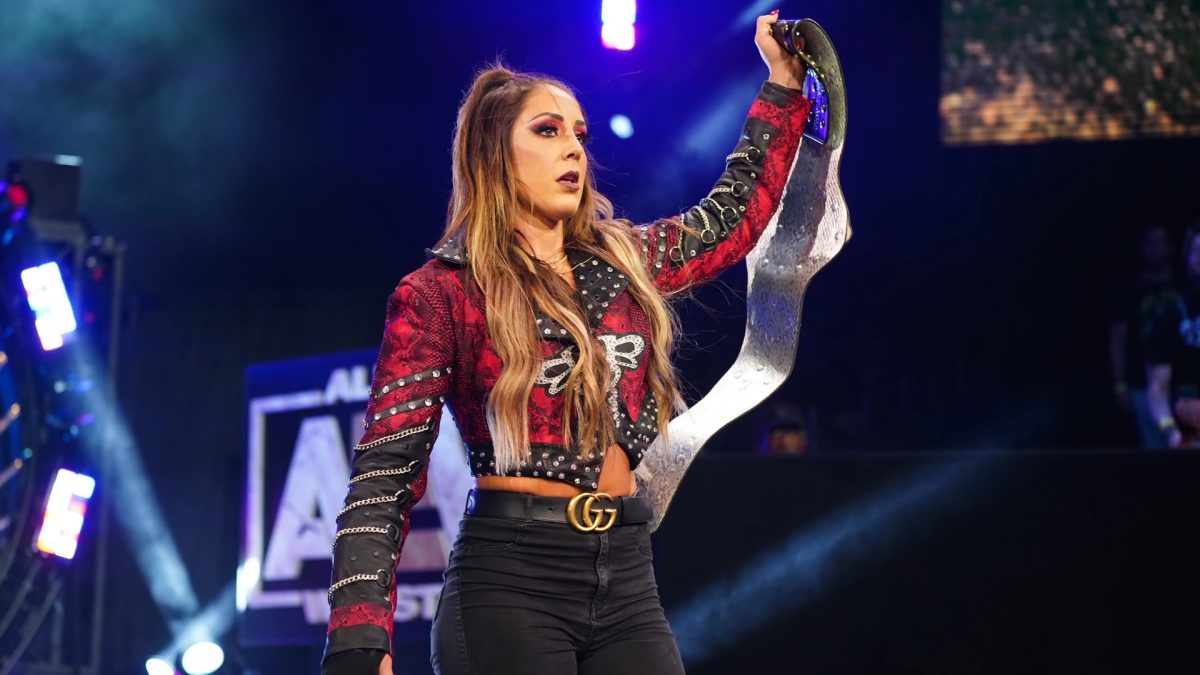 As noted before, WWE officials had been very interested in signing Britt Baker once her intital contract with AEW would have expired this year and used Adam Cole to keep them informed of her contract status.

During a recent episode of the Throwing Down with Renee & Miesha podcast, Baker confirmed that WWE had informed her husband Cole that they were very interested in signing her. Baker also stated that this was not a mutual interest on her end.

“It’s no secret because he’s [Adam Cole] already said it by now so cat’s out of the bag, I’m not gonna get in trouble — that WWE was definitely poking the bear a little bit through him recently, when I was still signed with AEW. You know, ‘Let Britt know we’re really interested in her.’ Without teetering the lines of contract tampering, they definitely let me know they had interest in me but, wasn’t a mutual thing. I’m very happy at AEW and very content and thankful for all the opportunities I’ve had there and this is where I wanna stay.”

Heath Slater Comments on His Recent Injury Return to Impact

WrestleZone held a recent interview with Heath Slater. One of the topics discussed included Slater’s thoughts on his recent return to Impact Wrestling from injury.

“It was so crazy, and I always joke around with the boys and production people and I always tell them last year that when IMPACT signed me, it was probably the worst investment that they ever made. [laughs] Just because I only did a handful of shows with them then we talked out a deal that I was happy with, they were happy with. I literally signed the deal, then a few hours later at Bound For Glory, I got hurt and it was just done. I’m just like, ‘Oh sh-t, you’ve got to be kidding me!’ But no, it felt wonderful being back because it’s been a long road this past year, with how the world is today and with me having five surgeries at once. So, it was a rollercoaster of hell for me this year, but hard work pays off and I’m just blessed and glad that I have a good support team that helped me through everything or I would’ve lost my damn mind.”

Game Changer Wrestling owner Brett Lauderdale recently announced on Twitter that he will be making a major announcement for the company during their Fight Club 2021 event this Saturday in Atlantic City, New Jersey.

Josh Barnett announced that NJPW talents Clark Connors and Alex Coughlin will be making an appearance for GCW at their Josh Barnett’s Bloodsport 7 event on October 22nd in Los Angeles, California. Barnett also announced that Lenny Leonard and Rocky Romero will be the commentary team for this upcoming event.

AEW announced that they have recently signed a partnership deal with NERDS Clothing and Capcom for Street Fighter inspired AEW branded shirts. It was announced that these special themed shirts will be available for sale at this week’s New York Comic-Con event, which takes place from October 7-10 in New York City, New York. It was also not announced if these special themed shirts will also be available for sale afterwards.

Impact Wrestling recently announced that they will be holding this year’s Turning Point event on November 20th at Sam’s Town in Las Vegas, Nevada. It was also announced that this upcoming event will air live on Impact Plus.

Indies talent Killer Kelly announced on Twitter that she will be stepping away from wrestling for the remainder of this year due to her recently suffering from non-COVID-19 related respiratory issues during her matches.

Battleground Championship Wrestling recently announced a new match for the card of their December 18th event in Philadelphia, Pennsylvania: