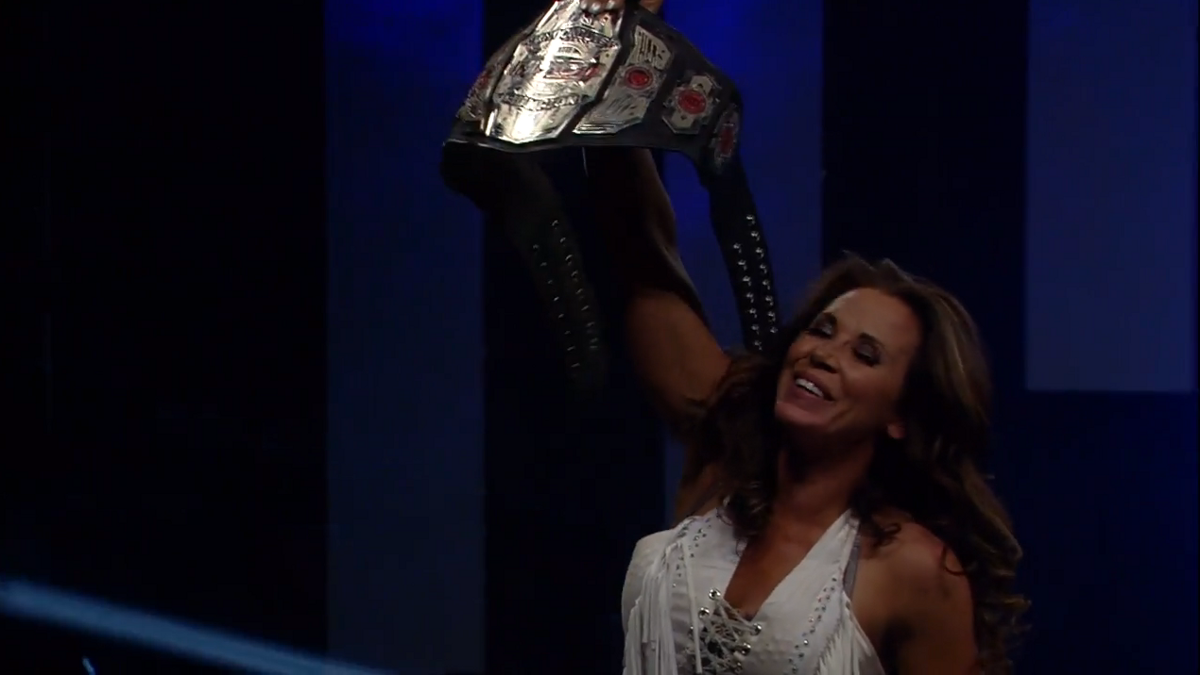 A recent episode of the Busted Open Radio podcast had Mickie James as the guest. One of the topics discussed included her thoughts on winning the Impact Knockouts Championship at this past Saturday’s Bound For Glory 2021 event in Las Vegas, Nevada.

“It feels so good. Honestly, I didn’t think it would matter as much to me as it did in a sense because I have been a champion several times and I’ve had such a tenured career. We always go, ‘God, I don’t need the championship. I’ve done so much.’ There was nothing sweeter than winning the championship. I hadn’t won a championship in eight years. My last championship was the one that I lost in IMPACT against ODB. When I think about that I go, ‘Wow, that’s a long time.’ I’ve done a lot, but not really for me. It was a great moment, it was powerful, and it felt good.

It was so special. In these last eight years, I’ve done some cool stuff, but for the most part it was for everybody else. I didn’t really do anything for myself. That was a choice and I was so happy to be back where I was and I thought that would happen for me and I would get to do whatever. There are so much more layers to it now. I leave and then how I left and all the things I did like EmPowerrr, being the head of EmPowerrr and that was really cool. To come back and have a chance at the championship again. It was a real chance to have a shot at the championship. Saturday was beautiful. The people were behind me and to have that real love behind me and for them to be on fire and to have a ‘this is awesome’ chant. Deonna is one of the best wrestlers I’ve ever been in the ring with. Not just of today, legit ever. She’s incredible. I knew I was going to be up for a fight and I think that’s been a major question from the audience, from whoever. ‘Yes, she’s amazing and a legend, but can she really hang with someone like Deonna?’ The answer is, yes, I can hang with someone like Deonna because there wouldn’t be a Deonna without Mickie James, that’s the reality. Not just me. I can still go, I never stopped going, what happened was I became less selfish and started doing more for other people than for myself. This one wasn’t a selfish move, but it felt good to win again and to remind myself that I can win and it’s okay to be awesome and I don’t have to apologize for it.”

New Japan Pro Wrestling recently announced that Kota Ibushi is currently expected to be out of action for the company for at least the next two months due to his recent shoulder injury. It was announced that based on the results of his recent medical evaluations, Ibushi suffered a right anterior dislocation of the shoulder and joint lip damage.

Minoru Suzki announced on Instagram that he is currently traveling back to Japan after finishing up his two-month long tour of the United States. (English translation via PostWrestling.com)

NJPW announced that they will be debuting a new weekly series called NJPW Xtra on their official English-language YouTube channel starting on November 1st. It was announced that this new series primarily will be a news and wrestling highlights-based show but will also feature one exclusive match per week as well.

NJPW recently announced four new matches for the card of their Battle in the Valley event on November 13th in San Jose, California:

AEW recently announced that they will be holding a set of television tapings for their AEW Dynamite and AEW Rampage series on December 15th at the Curtis Culwell Center in Garland, Texas. It was also announced that tickets for this upcoming set of tapings will officially go on sale starting this Friday.

PWInsider’s Mike Johnson reported that Alberto El Patron’s trial for aggravated kidnapping and sexual assault charges has been delayed again from its most recent scheduled date of October 25th to a new date of December 13th based on recent court filings.

As noted before, Sami Callihan has been out of action for Impact Wrestling since September 18th due to him suffering a broken ankle injury. During a recent interview with the Battleground podcast, Callihan provided a health status update stating that he recently had his stitches removed but it will be another four to five weeks before he can start rehab. Callihan stated “It’s going great. I’m like four weeks into recovery right now, finally got the stitches out from surgery and able to do a little bit of range of motion. Not going to be able to put any pressure on it for another four or five weeks and then I’ll start rehab. You can’t get rid of me that easy. Trust me, when I come back, there will be hell to pay and you’ll see an entirely new Death Machine.” (Transcript h/t: Fightful.com)