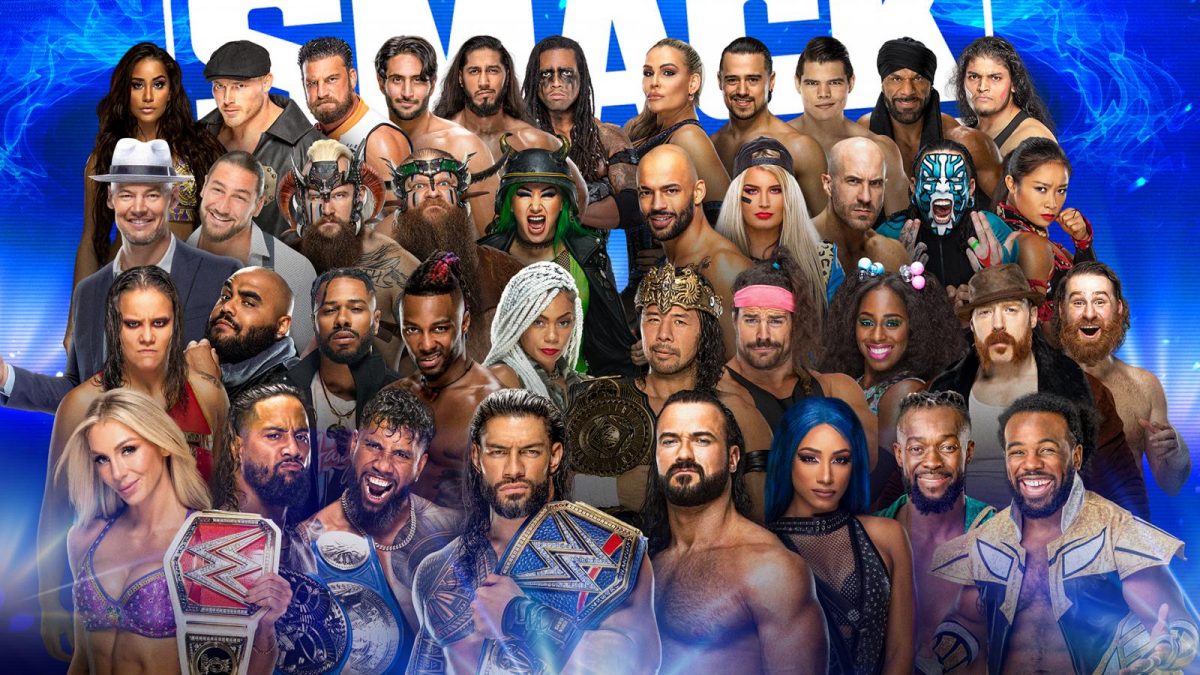 Live in the arena, WWE Universal champion Roman Reigns along with Paul Heyman walk down to the ring. Roman looks at Heyman and asks him if he is holding that title for himself or for Brock. Roman says because when he put his hand out, Heyman did the right thing and gave him the microphone. But at Crown Jewel, when Roman put his hand out, Heyman threw the title in the ring. Reigns extends his hand once more and Heyman gives him the title. Roman tells Heyman he is not great at his job but he is. He says he doesn’t think there is any denying at this point, he is the best of the best. He says he has carried the WWE on his back for over a year and a half. Roman says he is the tribal chief, the head of the table, the greatest Universal champion of all time. And that is because he smashed everyone. Daniel Bryan, Edge, Cesaro, Finn Balor, John Cena and he looks at Heyman and says his boy Brock Lesnar.

Reigns asks Heyman what Lesnar said about SmackDown. Heyman grabs his phone and he reads a Tweet saying how when he will arrive at SmackDown, he will beat Roman Reigns senseless. Roman laughs and slaps Heyman’s phone away. He says he beat Brock up so bad, he is tweeting. He says he runs SmackDown, he runs WWE, he is saying it, he is not going anywhere. He asks the fans if they want to see Brock Lesnar and they cheer. He says he wants to see Brock Lesnar too and he doesn’t mind beating him up again. He tells them to acknowledge him. Reigns says he is not leaving the ring before Brock Lesnar comes out.

Back from commercial, Roman says he is the greatest of all time. He says Brock fears him. He says he has given people too much time. He shows up, takes care of his obligations. The fans chant “We want Lesnar”. He says so does he.

Brock Lesnar’s music hits and he comes down to the ring. He gets in the ring and hits Roman with a clothesline and Roman to the outside. Right hands by Lesnar as he throws Roman into the steel steps. Lesnar looks at Heyman as he grabs the steel steps. Lesnar hits Roman with the steps and throws it in the ring. Lesnar lifts Roman up for an F5 but The Usos attack Lesnar from behind. Lesnar throws them over the barricade.

Roman with a right hand but Lesnar pushes Roman into the ring post.

Adam Pearce comes out with WWE superstars. Lesnar takes a few of them down as The Usos and Roman leave to the back. Lesnar grabs the WWE Universal championship in the ring as WWE superstars surround the ring.

Adam Pearce is in the ring. He says no one can come out and hold the show hostage. He says Lesnar endangered the crew, the officials, the superstars and the WWE Universe. Pearce says that cannot happen, not on his watch. Pearce indefinitely suspends Brock Lesnar.

Pearce turns around and out comes Brock Lesnar to the ring. Lesnar says he’s not sure he heard what Pearce said. Lesnar gets in the ring. The fans chant “Suplex city” as Lesnar grabs Pearce. Lesnar tells Pearce to tell him again. Pearce says he didn’t have a choice and he is indefinitely suspended.

Lesnar gets Pearce in the corner. He laughs and hits Pearce with an F5 in the middle of the ring. He grabs Pearce again and hits him with another F5 as the fans cheer. Lesnar grabs a microphone and tells Pearce he can’t hear him as he throws the microphone on Pearce.

She turns around and Drew is standing behind her. He says there’s chaos around but he will do her a favor. He will walk to the ring, issue an open challenge and see which SmackDown superstar has the balls to fight Drew McIntyre as he heads to the ring.

Drew McIntyre’s music hits and out he comes to the ring. Drew grabs a microphone. He asks who wants a match. Out comes Sami Zayn to the ring.

Sami comes out to a new song. He tells Drew he is the longest tenured member of SmackDown. He is something of a locker room leader, the gatekeeper. He says Drew might be a former WWE champion but on SmackDown, Drew is still new. But if he wants someone brave enough to accept his challenge, maybe everyone forgot that he is the best superstar on SmackDown. He accepts Drew’s challenge.

Back from commercial, Drew throws Sami in the corner. Drew with an overhead throw. Drew with a clothesline as he sends Sami to the ropes and a neck breaker by Drew takes Sami down. Drew goes for the Claymore but Sami rolls to the outside. Drew grabs Sami onto the ring apron but Sami hangs him up on the top rope. Sami goes for the Blue Thunder Bomb but Drew grabs Sami’s leg.

Out comes Kofi Kingston to the ring with a throne, a cape and the crown. Kofi says they are gathered for the grandest of coronations. He welcomes the new King of the Ring, King Xavier Woods. Kofi calls Woods his majesty. He grabs the cape and and places it on Woods. The fans chant “You deserve it”. Kofi gives him the scepter. Kofi places the crown on Xavier’s head as he gives Woods a microphone.

Woods says he can’t express how much that means to him. He says the WWE universe have shown him a lot of love and affection and they helped him turn his dream into a reality. He thanks everyone and says while he is king, there will be opportunity. He says he wants to give the people the king’s gospel. Kofi reads a manuscript saying all hail King Xavier, the first of his name. Kofi says hail King Woods as the fans chant “Hail King Woods” as they head to the back.

Will there be a title exchange tonight… or will #Becky2Belts make a comeback? #SmackDown @BeckyLynchWWE pic.twitter.com/udDoxvDKKK

Ridge Holland is backstage and he cuts a promo talking about if you would have told him as a young kid in Yorkshire that he would be fighting on SmackDown, he would believe you.

Aliyah cuts a promo where she says SmackDown is going to get a lot more boogie.

Angel Garza and Humberto Carrillo say they are the hottest tag team.

Sheamus says he doesn’t need to introduce himself to anyone because no one delivers in the ring like him.

Hit Row come out to the ring. B Fab says they have heard about Hit Row. They introduce themselves and if you didn’t know, now you know.

The bell rings and we are under way. Swerve throws Dustin down and he hits him with a spinning elbow off the second rope. Top Dolla is tagged in and he hits Lawyer with a splash. He goes for the cover but Daniel Williams breaks it up. Top Dolla lifts him and Lawyer up and he slams them both down. Swerve is tagged in and they double team Lawyer, with Top Dolla hitting a side slam. Swerve goes for the cover and gets the pin.

Kayla Braxton is outside of the trainer’s room. Out comes Sonya who says Adam will eventually be fine but he is a little on the fragile side. He told Adam that he would go out and tell Lesnar to his face that he was suspended. But Adam insisted on doing it his way but the show must go on. Sonya says but they will have Charlotte and Becky exchange their titles.

Rick Boogs is on the ramp as he introduces Shinsuke Nakamura to the ring.

Charlotte Flair is backstage. She says she knows Becky won’t hand over the title but for her to pretend it’s Charlotte’s briefcase that she has been carrying her entire career. She tells Becky to give her the title.

Becky Lynch comes down to the ring with Sonya Deville in the ring. Out comes Charlotte Flair.

Becky tries to grab Charlotte’s Raw championship but Charlotte drops it. Charlotte picks it back up and gives it to Sonya. Becky throws the SmackDown women’s title to Charlotte who raises the belt. She tells Becky she wants to be Becky Two Belts and winner takes all tonight.

Out comes Sasha Banks to the ring. She says the boss, the standard runs SmackDown and Charlotte won’t cone out take over. She calls her a bitch and says she is out of her mind. Charlotte says this is a PG show and asks Sasha if she felt left out. Becky says she will go to Raw and see one of them at Survivor Series.