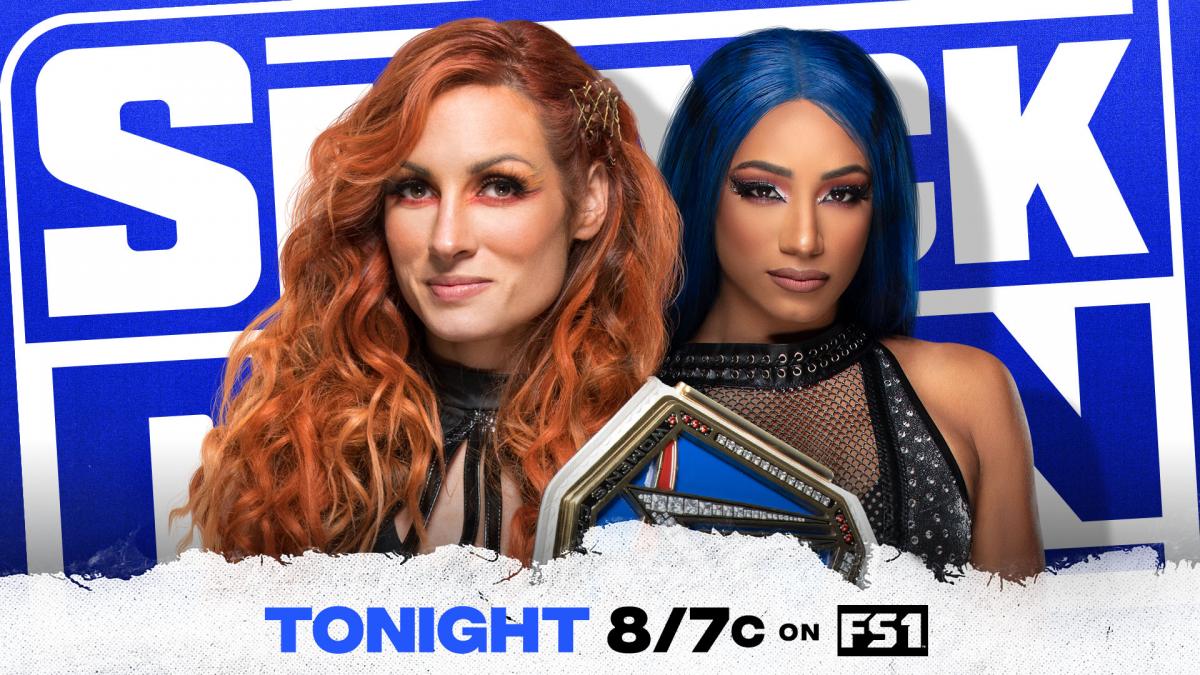 WWE SmackDown kicks off with Edge walking down to the ring. He sits on a chair in the ring and says this entire thing with Seth started 7 years ago when Seth tried using him as a stepping stone. And 7 years later, all of those weeks after he beat him at Madison Square Garden, Seth kept calling him out even though he knew he was not medically cleared. Edge shows up to SmackDown and Seth goes to Edge’s home.

Edge tells him he is the only person who when in the ring, comes close to matching his passion. Edge says Seth is not Edge light, he can admit that. He was wrong, Seth is Seth Rollins. The fans chant Seth you suck. Edge says he can go to Seth’s house and have an encounter with Becky but he won’t do that.

A few weeks ago Seth said he felt sorry for him and that was a mistake. You never feel sympathy for a devil and that’s what they are. Edge says he won’t hesitate to put Seth down and he will not have a second thought about it. And their story ends at Hell in a Cell. He tells Seth he knows he is watching and he wants him to listen closely. Edge tells him at Hell in a Cell, he is going to scar his soul and that is a scar that you never heal from. Edge drops the microphone and leaves the ring.

King of the Ring Round 2
Finn Balor vs. Sami Zayn

The bell rings and we are under way. An arm bar by Finn but Sami gets out of it. Sami with a chop to the chest as he runs to the ropes, a sunset flip by Sami but Finn gets out of it and a dropkick by Finn. Another arm bar by Finn in the middle of the ring but Sami with a knee to the stomach. A clothesline by Sami. He goes for the cover but Finn kicks out. Finn places Finn on the second rope as he chokes him.

Out comes Sonya Deville in a suit. She says that Naomi walked out of her office last time before she was done speaking. Naomi will have a match against herself and Shana Baszler.

The bell rings and Sonya slaps Naomi as Naomi gets back up. She knocks Shayna down and chases Sonya. A drop toe hold by Naomi onto Shayna. A running knee by Sonya takes Naomi down. They double team Naomi in the ring. Naomi fights back, knocking Sonya down. She jumps off the second rope and knocks Sonya down with a kick. She climbs the first rope but Sonya holds her leg. Naomi grabs Sonya but Shayna with the Kirifuda Clutch. Sonya puts her foot on Naomi and gets the pin.

Sasha Banks is backstage. She says they are six days away from Crown Jewel where she will make history and take back her championship. She says she has been doing history since day one, she came back to get her title back and last week she beat up Bianca and this week, it will be Becky. She says she will be the new SmackDown women’s champion.

Out comes Seth Rollins to the ring. The fans chant Seth you suck as he laughs. He tells them that Edge came out and tried to convince everyone and himself that he has a chance against him at Crown Jewel. He says he is not intimidated or afraid to face Edge inside Hell in a Cell. And that’s because hell has already frozen over in California. He says Edge said that he was wrong and Seth is not Edge light.

Seth says Edge is finally realizing that he is better than Edge in every single possible way. Seth says he is in Edge’s head, he has out manipulated the master of mind games. He says he is going in with a mental advantage and a physical advantage after what happened to Edge at Madison Square Garden. He says Edge has an ace up his sleeve which is Hell in a Cell. He says he is not intimidated or afraid of Edge.

The fans chant that they want Edge. Seth says that Edge is right in that they are similar but there is one major difference between them. Seth has spent more time in that cell than Edge has. He knows what that structure does to people. He knows what it has done to him. He is the man he is today because of Hell in a Cell. He says this ends at Crown Jewel but not the way Edge thinks and he knows this because he is the visionary, the revolutionary, he is Seth Rollins. He drops the microphone and leaves to the back. 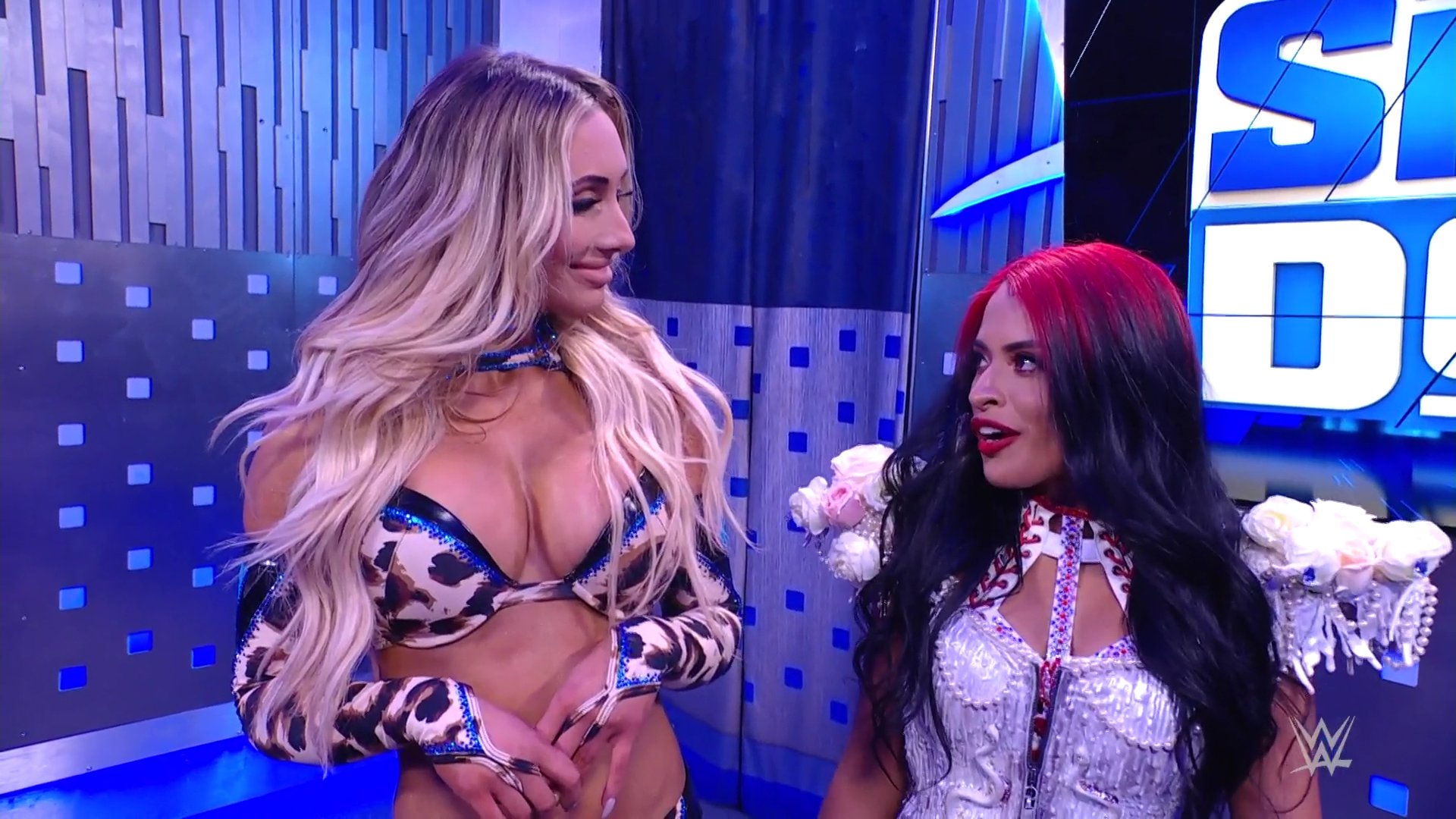 Carmella is backstage and in comes Zelina Vega. She says she is glad she took care of Liv Morgan because if Zelina is going to win the Queen’s Crown Tournament, she wants to go up against the best. And they all know that Carmella is ten times better than Liv Morgan and Toni Storm. Zelina tells her she won’t break anything and there is no need for her to wear her mask. Carmella laughs and heads to the ring.

Carmella rolls up Vega, but Vega kicks out right away. Waist lock by Carmella, then a takedown with an armbar. Vega tries to escape, but Carmella keeps her down with the armbar. Zelina finally gets out. They exchange a couple of moves. Zelina charges Carmella and went for her face. Carmella goes to the outside, wanting to get the protective mask. Liv Morgan has the protective mask outside and Carmella goes back in, Zelina rolls her up for the win.

After the match, Liv Morgan goes in the ring holding the protective mask.

Zelina is in the finals. She goes and sits down on the royal chair and wears the crown.

Corbin tells Madcap to tell a joke and he tells a lame one. Corbin says Owens couldn’t take Happy Talk and that’s why he’s going to be on Raw. Madcap asks what do you call when Owens is rolling around in pain on the ground. Just another Friday night. They both laugh as Madcap tells another joke and out comes Rick Boogs playing the guitar. He introduces Shinsuke Nakamura to the ring, then they go back to the stage and the Street Profits come out.

The bell rings and we are under way. Dawkins with a DDT onto Jey Uso. Dawkins throws Jey to the outside of the ring. Ford gets Jimmy in the corner but in comes Jey who hits him with a neck breaker. He goes for the cover but Ford kicks out. The Usos to the outside as they double team Dawkins throwing him into the barricade. Ford flies over the top rope onto The Usos. Dawkins tells Ford to get the tables as they get a table from under the ring. The Usos with a suicide dive through the ropes to the outside.

Dawkins on the outside attacks Jey. He gets in the ring and goes for the cover on Jimmy but Jimmy kicks out, Jey with a right hand and Jimmy with a super kick. They hit Dawkins with a double super kick. The Usos on the top rope and the double splash. They go for the cover and get the pin.

Becky jumps off the second rope, Sasha moves out of the way and hits her with the Banks Statement. Becky rolls to the outside. Both women on the ring apron and Becky trips Sasha up and hits her with a leg drop. Becky jumps off the ring steps but Sasha catches her and gets her in the Banks Statement. Becky taps out. Sasha throws her back in the ring. Sasha climbs the top rope and she hits Becky with the frog splash. She goes for the cover but Becky kicks out. Sasha with a right hand.

Bianca slams Becky’s arm into the steel steps. Sasha with the Bank Statement. She goes for the cover and gets the pin.

Roman tells Lesnar he must be a kind of dumb ass, a dumb farmer. He tells Lesnar he signed it without reading it. Lesnar laughs and tells Roman he read the contract earlier with his advocate Paul Heyman. Lesnar stands up and leaves the ring. Roman looks at Brock and looks at Heyman.