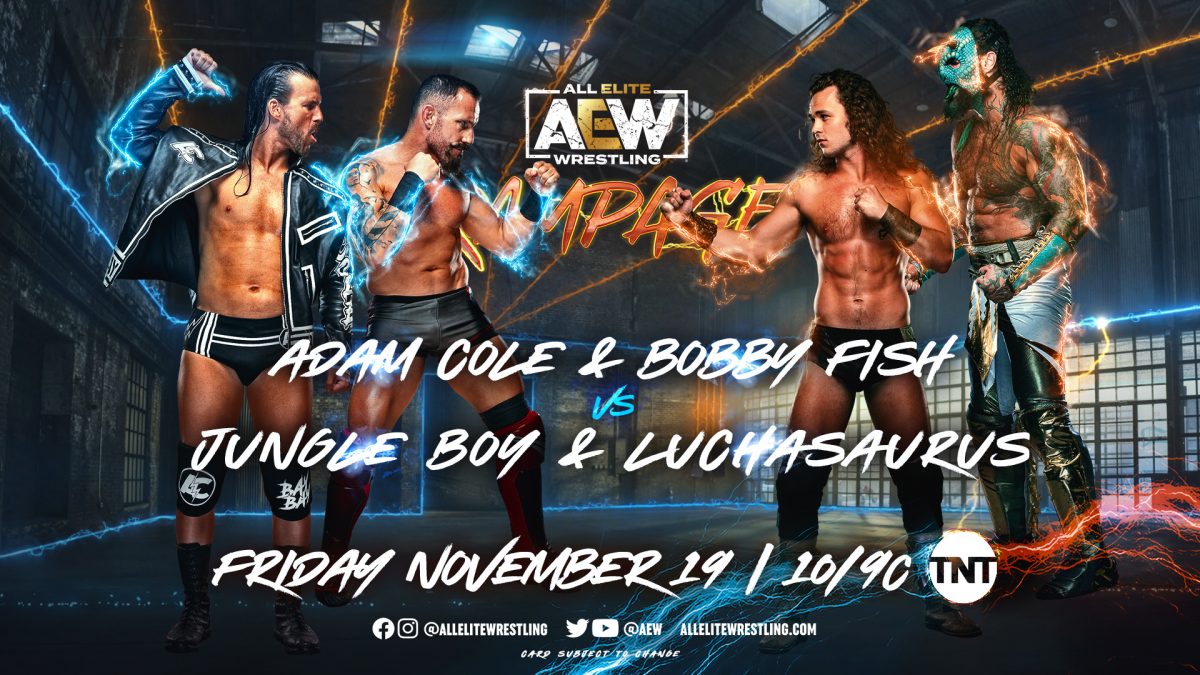 Results by Josh Boutwell of Wrestleview.com

This is Gunn’s first match on Rampage and his first match on TNT since August. Gunn locks up with Allin and then lifts him up to the top rope and taunts him by patting him like a kid. He throws Allin across the ring when Allin wanted to do another lockup. Gunn dares him to try a Test of Strength but Allin slaps the piss out of him and then dropkicks Gunn. Allin charges at Gunn but gets backdropped into the lights.

Gunn lifts Allin up to the top rope and climbs up with him but Allin bites him and knocks Gunn off. Allin then hits a Coffin Drop onto Gunn’s sons on the floor. Gunn flings Allin across the ring again and then goes for a Stinger Splash, but Allin moves and hits a Flipping Stunner followed by a botched Code Red and the Coffin Drop but Gunn kicks out at one. Allin hits a second Coffin Drop for the pin.

Gunn’s sons attack Allin after the match but Sting cleans house. Gunn chop blocks Sting and beats him down.

Quite the challenge made by @QTMarshall. The leader of #TheFactory wants @CMPunk in Chicago This Wednesday on #AEWDynamite LIVE on TNT. Watch #AEWRampage NOW on @tntdrama! pic.twitter.com/dNKTyq3U6i

Backstage, QT Marshall challenges CM Punk for a match in Chicago next week on Dynamite.

Video Package: The Inner Circle, Men of the Year

Jade and Velvet exchange forearms early on and Jade misses a Pump Kick but then blocks a Rana attempt. Velvet tries to catch Jade with a Sunset Flip but Jade blocks it and tries to stomp her. Velvet moves and goes for a Spin Kick but Jade catches her and hits a Fall Away Slam. Jade puts the boots to Velvet. Jade hits a Pump Handle Slam and goes for a Scoop Slam, but Velvet escapes and hits a Leg Lariat knocking Jade to the floor. Velvet goes for a dive but Jade slaps her in midair. Jade Chokeslams Velvet on the apron.

Cargill puts the boots to Velvet in the corner and chokes her before tossing her across the ring. Jade taunts Velvet by doing pushups but then eats an elbow from Velvet for her troubles. Velvet kicks Jade and hits a series of Slingblades and then a Cazadora Bulldog. Velvet charges at Jade but Jade leapfrogs her and then hits a Pump Kick.

Jade goes for Jaded but Velvet counters into a sloppy backslide for two. Velvet hits a Spear for another nearfall. Velvet goes for the Final Slice but Jade moves and hits Jaded for the pin.

The December 15 Dynamite will be called “Winter Is Coming.”

We’ll find out this Wednesday LIVE on #AEWDynamite who will advance to face @Jade_Cargill in the TBS Championship Tournament when @thunderrosa22 and @jmehytr square off in the quarterfinals! Watch #AEWRampage NOW on @tntdrama pic.twitter.com/srAsBNAvzE

Backstage, Thunder Rosa says she will beat Britt Baker’s other stooge and will become the first ever TBS Champion. Her and Hayter face off in the quarterfinals on Dynamite.

We cut to Tony Schiavone with CM Punk. Punk says the stakes are always high in your hometown and he says that Marshall can bring all of his buddies with him and it won’t matter because he bit off more than he can chew.

A vignette recaps the drama between Bryan Danielson and the Dark Order/Hangman.

Mark Henry interviews the SuperKliq and Jurassic Express. The Elite bitch about Jungle Boy trying to end Matt Jackson’s career but says that he and Fish will put an end to their “stupid charade” tonight. Jungle Boy says the first Bobby Fish match he ever saw he won. Christian says they beat the shit out of them at Full Gear and he’s going to bring his friend with him tonight and picks up a chair.

Cole and Jungle Boy start things off and Jungle Boy shows off his speed early on with his Double Spring Lucha Armdrag but he misses a Dropkick and Cole kicks him in the mouth. Cole and Fish work Jungle Boy over in their corner. Fish hits a Slingshot Somersault Senton but Jungle Boy comes back with another Springboard Armdrag and the dropkick. Luchasaurus tags in and hits a big Palm Thrust. Lucha absorbs a series of strikes from Fish and lays him out with a Roundhouse Kick.

Lucha works Fish over in the corner and tags Jungle Boy. He slams Fish and dives off Lucha’s shoulders with a Somersault Senton for two. Jungle Boy this the ropes but Cole hits him from behind and kicks him allowing Fish to hit a Roundhouse Kick.

Fish throws Jungle Boy into the ropes but he bounces back with a Rebound Lariat! Fish tags out and Cole stops Jungle Boy from tagging out. Cole goes for the Shining Wizard but Jungle Boy ducks and tags Lucha. He lays out both Fish and Cole with kicks. Luchasaurus throws them into opposite corners and hits Running Hip Attacks and then a Double Clothesline.

Luchasaurus goes for a Double Chokeslam but they kick Lucha and then go for a Double Clothesline but Lucha ducks and tags Jungle Boy. Jungle Boy and Lucha hit some double team action capping it off with a 3D on Cole for two. Fish kicks Jungle Boy and Cole follows up with kicks of his own. They hit a Roundhouse Kick/Brainbuster combo and then Fish hits a Somersault Plancha onto Lucha on the outside! Cole covers Jungle Boy but only gets two.

Cole attempts the Shining Wizard but Jungle Boy moves and they crash into each other. Cole hits a Pump Kick but Jungle Boy comes back with a Superkick. Jungle Boy goes for a Springboard DDT but Cole kicks him in midair. Cole goes up top and goes for the Panama Sunrise but Lucha grabs him and Powerbombs him! Jungle Boy hits a Sliding Elbow for a nearfall but Fish broke it up.

Fish pulls Cole to their corner and tags him. Fish hits a Flying Knee and a series of strikes. Fish hits a Dragonscrew Leg Whip and charges at Jungle Boy but Jungle Boy suplexes him into the turnbuckles! Jungle Boy goes for a Deadlift German but Fish grabs the ropes. The Young Bucks distract Jungle Boy and Luchasaurus but Christian runs out with a chair and chases them away. Cole runs with them as Fish rolls up Jungle Boy for two. Jungle Boy counters into a nearfall of his own and locks in the Snare Trap! Fish almost reaches the ropes but Jungle Boy pulls him back and Fish taps!