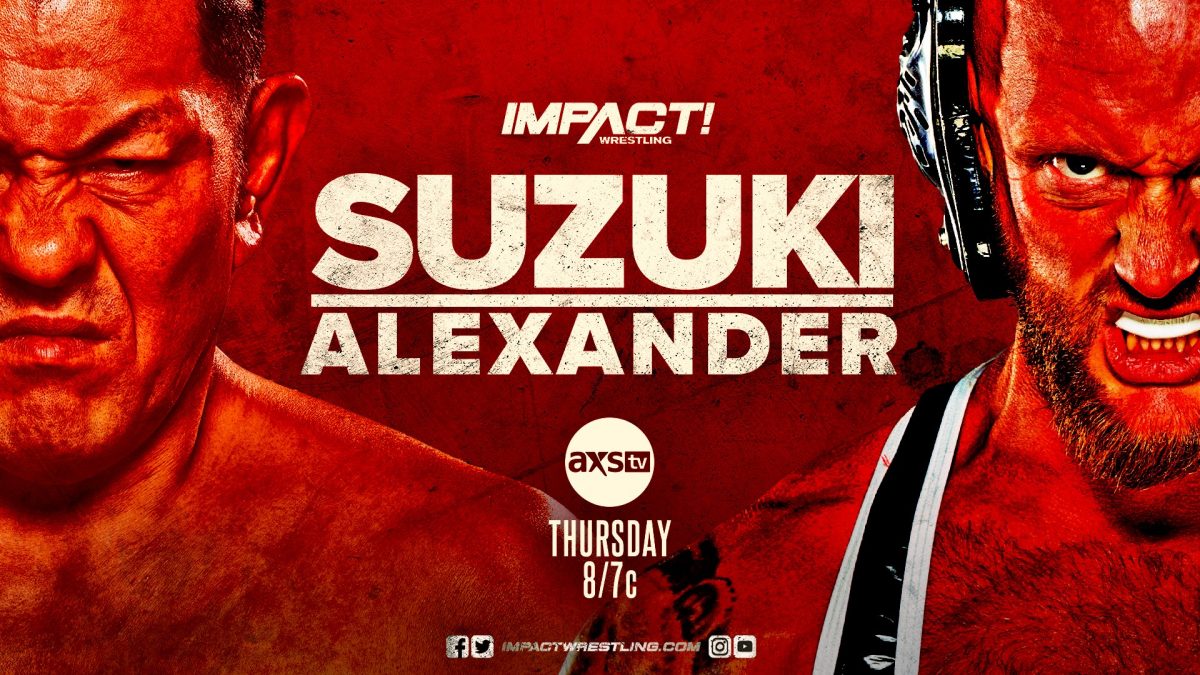 It’s a battle of Teacher vs Student as Brian Myers takes on Sam Beale tonight! Beale quickly asserts himself moments into the match. He charges into the corner but Myers sidesteps and sends him over the top rope to the floor. Myers uses his experience advantage to remain in control with crafty offense. Beale avoids the Roster Cut clothesline, then follows up with a top rope crossbody to create separation. Myers hits a Spinebuster for two as Rich Swann, Willie Mack, Zicky Dice and VSK are seen watching the match from backstage. Myers comes back with a top rope elbow drop for a near fall. Myers hits two Roster Cut clotheslines to win!

After the match, Brian Myers crosses the line and delivers a sickening steel chair assault to Beale.

.@SteveMaclin has forced his way into the #TurningPoint X-Division Championship match. #IMPACTonAXSTV pic.twitter.com/s6tv1jkBNI

If Maclin Wins, He’s Added to the X-Division Title Match at Turning Point

Steve Maclin battles Laredo Kid with X-Division Title implications! If Maclin wins, he’ll be added to the X-Division Title match with Trey Miguel and Laredo Kid at Turning Point. Maclin launches himself through the ropes, taking out Laredo on the floor. Laredo avoids a spear, then soars off the top with a Swanton Bomb to the outside. Laredo hits multiple springboard Moonsaults for two. Maclin comes back with a running boot for a near fall of his own. Both men are down following a cartwheel DDT from Laredo and a big clothesline from Maclin. Moments later, Maclin hits the running spear in the corner, followed by Mayhem For All to win!

The X-Division Title match at Turning Point will now be a three-way as Trey Miguel defends against Laredo Kid and Steve Maclin.

After Brian Myers gave Sam Beale a Con-chair-to on BTI, Rich Swann challenges him to a match this Saturday at Turning Point!

.@TheTreyMiguel plans to make a point of defeating @SteveMaclin and retaining the X-Division Championship at #TurningPoint! #IMPACTonAXSTV pic.twitter.com/zbDEmZ6BOM

Trey Miguel vows to defeat Steve Maclin in the three-way X-Division Title match at Turning Point and bring an end to his undefeated streak!

Chris Sabin tells Ace Austin to “prove himself” by defeating him in a rematch at Turning Point. After initially declining the challenge, Ace changes his mind and makes it official. A brawl breaks out as Sabin outsmarts his adversaries, locking Fulton inside a fridge!

Before The IInspiration defend the Knockouts World Tag Team Titles against Decay in a rematch at Turning Point, they look to eliminate the Undead Bridesmaids from “their” division! Kimber chases Jessie around the ringside area but walks right into a roundhouse kick from Cassie. Brandi quickens the pace, delivering a sliding dropkick to Cassie. Jessie turns the tide, allowing The IInspiration to hit a double team powerbomb for the win.

After the match, the lights go out as Decay surround The IInspiration in the ring and send them a message ahead of Turning Point!

Chelsea Green prepares to challenge Jordynne Grace for the Digital Media Championship at Countdown to Turning Point, LIVE this Saturday at 9:30pm ET on IMPACT digital platforms! Meanwhile, Matt Cardona and W. Morrissey both want the next IMPACT World Title shot, leading to match between the two at Turning Point.

.@TheMooseNation narrowly avoids DISASTER from the top of a ladder at the hands of @TheEddieEdwards! #IMPACTonAXSTV pic.twitter.com/kG8IDu0yoa

IMPACT World Champion Moose blindsides Eddie Edwards during an interview with Gia Miller and a brawl breaks out! The fight spills into the IMPACT Zone where Moose powerbombs him on the apron. Eddie gains momentum with a series of steel chairs shots, followed by a double underhook powerbomb. Eddie places Moose on a table and climbs to the top of a ladder but Moose retreats just in time. On the other side of the curtain, Scott D’Amore tells Moose that his IMPACT World Title match against Eddie Edwards at Turning Point will now be Full Metal Mayhem!

Will the OG Badass @RealMMartinez emerge victorious against @MickieJames THIS SATURDAY at #TurningPoint? #IMPACTonAXSTV pic.twitter.com/DhJK1GJEFh

Mercedes Martinez stakes her claim to the Knockouts World Championship when she challenges Mickie James this Saturday at Turning Point!

.@The_BigLG is victorious in the battle of the giants. #IMPACTonAXSTV pic.twitter.com/fapiUNH6nH

It’s a clash of giants before The Good Brothers defend the IMPACT World Tag Team Titles against Bullet Club at Turning Point! Gallows immediately goes on the attack, bringing the fight to Hikuleo on the outside. Bullet Club distracts the referee, allowing Hikuleo to deliver a low blow and gain control. Gallows fights out of a chin lock and creates separation with back-to-back clotheslines. Gallows hits the sitdown powerbomb to win the match and build momentum towards this Saturday’s title showdown!

Gia Miller conducts an interview with former Knockouts World Champion Deonna Purrazzo. This is the first time anyone has seen “The Virtuosa” since losing the title to Mickie James at Bound For Glory. Purrazzo is not receptive to any of Gia’s questions and states that the only reason she’s present for the interview is because she’s contractually obligated. After refusing to provide any additional information, Purrazzo says that the world will just have to wait and see what her next move is.

.@THEdavidfinlay and Juice Robinson have had a sorry run of luck in Las Vegas so far but they’ll go again against Decay at Countdown to #TurningPoint. #IMPACTonAXSTV @ScottDAmore pic.twitter.com/7LA00en2io

Scott D’Amore gives FinJuice an opportunity to get back on track and puts them in a match against Decay at Countdown to Turning Point!

Eric Young says that his issues with Rhino will be “over forever” when Violent By Design battle Rhino and Heath at Turning Point!

Johnny Swinger and his crew look for revenge on The Demon in this wild six-man tag team match! Taurus headbutts Swinger, followed by tandem offense from Decay. Hernandez turns the tide with a sitdown powerbomb to Steve. Moments later, Steve bites Swinger and makes the tag to The Demon. Decay flies over the top to take out Hernandez and Fallah on the floor. Inside the ring, The Demon defeats Swinger by submission to score the victory for his team!

Digital Media Champion Jordynne Grace claims that Chelsea Green won’t be able to get the job done when they battle for the Digital Media Title on Countdown to Turning Point.

.@RealMMartinez may be the OG Badass but @MickieJames is Hardcore Country. #IMPACTonAXSTV pic.twitter.com/QZKZOPOCaF

Knockouts World Champion Mickie James said she should have known better after Mercedes Martinez attacked her from behind last week.

A first-time-ever dream match headlines tonight’s episode of IMPACT! as NJPW legend Minoru Suzuki collides with Josh Alexander! It’s a stalemate in the early going as Alexander counters the armbar and Suzuki counters the ankle lock. Suzuki locks in another armbar, this time on the ropes, to do some series damage. Suzuki takes out a security guard for stopping him from using a steel chair. They brawl to the top of the stage where Suzuki hits a big running boot, sending Alexander tumbling down the ramp. Both men exchange chops, then strikes in the middle of the ring. Suzuki attempts the Gotch Piledriver but Alexander fights it off with a back bodydrop. Alexander hits the C4 Spike to win by pinfall!

Josh Alexander celebrates this monumental victory as his wife, Jade, watches on from ringside.