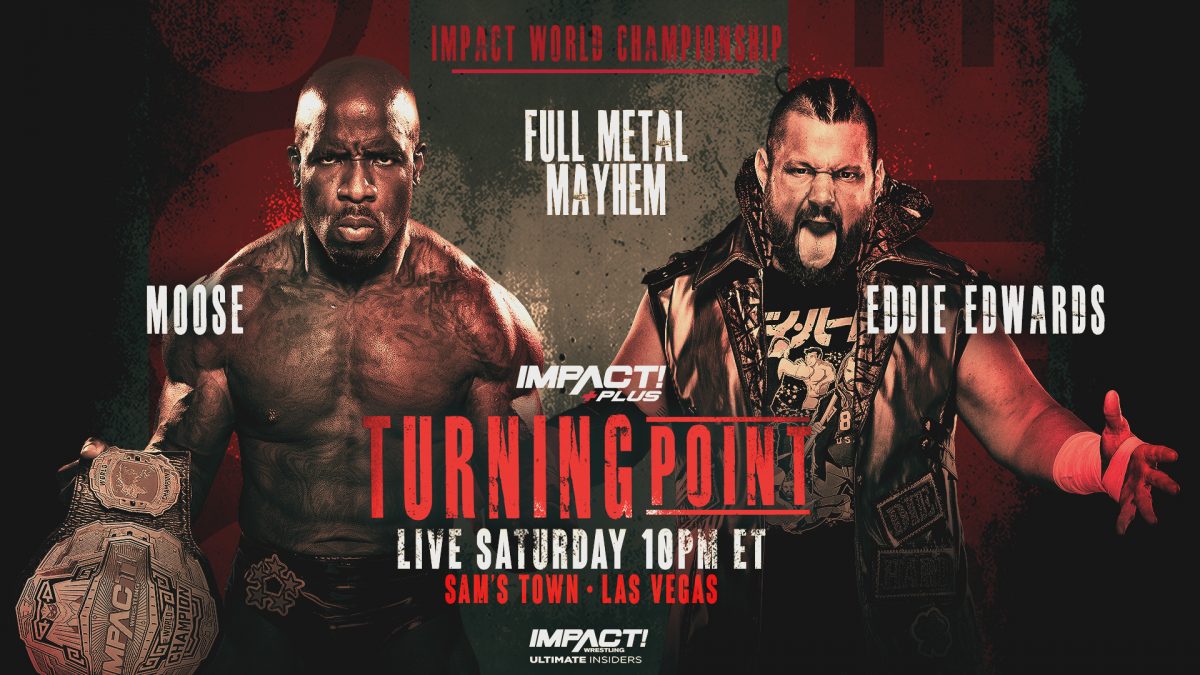 Cannonballs for everybody from Juice Robinson. #TurningPoint pic.twitter.com/yzQCHdGoDE

Two of IMPACT’s top duos look to move up the ranks in the competitive tag team division! Juice hits Rohit with a powerslam, followed by a delayed vertical suplex. Rohit distracts the referee, allowing Raj to deliver a back suplex to Finlay on the hardest part of the ring. Raj hits a modified neckbreaker on Finlay to remain in control. Finlay creates separation and makes the tag to Juice as the pace quickens. Juice connects with back-to-back running cannonballs in the corner.

Rohit trips up Finlay from the outside, leading to a double team DDT on Juice. FinJuice connect with the Doomsday Device to score the victory by pinfall!

Jordynne Grace puts the Digital Media Title on the line against #1 contender Chelsea Green! The action is fast and furious from the opening bell as both Knockouts hit a flurry of offense. Chelsea gains the advantage with a running dropkick. Chelsea goes to the top but Jordynne counters and hits her with a big press slam. Jordynne sends her shoulder-first into the steel ring post. Jordynne hits her signature corner combination but misses the follow-up Vader Bomb. Chelsea hits a curb stomp for a very close near fall. Jordynne comes back with a modified driver but this time it’s Chelsea who gets her shoulder up at two.

Jordynne hits an Electric Chair into the Grace Driver to retain the Digital Media Title!

Ace Austin and Chris Sabin meet in a heated rematch to kick off Turning Point on IMPACT Plus and YouTube for IMPACT Ultimate Insiders! Fulton pulls Ace to safety in the early going but Sabin makes Ace pay with a vicious punt kick. Sabin hits a top rope crossbody for an early two count. Sabin attempts a springboard but Ace meets him on the second rope and hits a Russian leg sweep. Sabin goes for a desperation move, connecting with a tornado DDT off the top to create separation.

Both men are out following a double Enzuigiri. Ace hits a top rope leg drop but Sabin kicks out at two. Sabin takes him off the top with a Superplex for a near fall of his own. Fulton throws the “I Beat Chris Sabin” shirt into the ring but the distraction isn’t enough. Sabin hits Ace with the Cradle Shock to win!

Heath and Rhino are out for revenge but with Eric Young back in action, Violent By Design is more dangerous than ever! Heath pummels Doering in the corner until Deaner hooks his leg from the outside. The referee ejects Deaner from ringside but the distraction allows Doering to take control with a huge clothesline. Young joins the fray as he continues the beatdown on Heath. After a long beatdown, Heath finally makes the tag.

Young clobbers Rhino with his mask to steal the victory!

Rich Swann looks to teach VSK of The Learning Tree a lesson that he’ll never forget! Swann goes on the attack right from the opening bell. Swann launches himself off the apron but VSK sidesteps, allowing him to drive Swann back-first into the steel ring post. In the ring, VSK hits a tilt-a-whirl backbreaker to remain in control.

Swann catches him with a neckbreaker, followed by Rolling Thunder for two. Willie Mack takes out Zicky Dice at ringside. Swann hits a handspring cutter, Frog Splash and the Phoenix Splash to score the victory!

Two of IMPACT’s top stars collide in hopes of moving one step closer towards an IMPACT World Title opportunity! Cardona tries to take the big man off his feet and does so with a basement dropkick to the outside. Cardona hits a neckbreaker on the floor to continue the offense. Morrissey catches Cardona and swings him into the steel ring steps. Morrissey hits a thunderous big boot that sends Cardona toppling down to the floor. Cardona makes it back into the ring before the referee’s count of 10. Cardona hits a top rope dropkick to start building momentum but Morrissey shuts him down on the outside with a chokeslam on the apron.

Morrissey pushes Cardona into the referee. Cardona hits Radio Silence but the referee is down. Out of nowhere, IMPACT World Champion Moose spears Cardona. Morrissey crawls to the cover for the win!

After The IInspiration won the Knockouts World Tag Team Titles in their IMPACT debut, Decay get their rematch right here, right now! Decay is in total control as they swarm their opponents, leading to a brawl on the outside. The IInspiration quickly turn the tide, cutting off the ring and wearing Havok down. They target the arm of Havok as Cassie hits a pinpoint stomp from the top. Havok fights out of a submission and makes the tag to Rosemary. The pace quickens with a series of clotheslines, followed by a Slingblade to Cassie. Rosemary throws Cassie halfway across the ring with a release German suplex. Rosemary hits the spear but Cassie breaks the pin by grabbing the bottom rope. The IInspiration hit a double team powerbomb on Rosemary.

Havok gets sent into the steel ring post, then Cassie rolls her up with her feet on the ropes to retain!

The first person to gain the pinfall or submission will leave Turning Point as the X-Division Champion! Maclin dives through the ropes, taking out Trey on the ramp. Laredo hits a 450 splash to Maclin. Moments later, Maclin launches himself off the apron to deliver a pounding elbow drop to Trey. Maclin catches Trey and drives him to the mat with a Uranagi. Laredo attempts a Hurricanrana but Maclin counters and powerbombs him into the apron. Trey almost puts Maclin away with a rolling slam but Laredo breaks the pin. Trey and Laredo go toe-to-toe in the middle of the ring. Laredo spikes Maclin with a Posion Rana, followed by the Laredo Fly to Trey.

Maclin gets his knees up on a 450 Splash attempt. Maclin hits Laredo with Mayhem For All but Trey breaks the count with a top rope Meteora. Trey goes for the pin on both men. Maclin kicks out but Laredo Kid does not, awarding the victory to Trey!

Mickie James and Mercedes Martinez meet in a star-studded Knockouts World Title clash! Mercedes counters a leg scissors attempt and sends Mickie crashing into the turnbuckles. Mickie takes Mercedes off her feet with a series of kicks. Mercedes avoids the DDT, then spikes Mickie head-first into the mat. Mickie fights out of the Razor’s Edge but gets hit with a modified Half Nelson suplex.

Mercedes takes her off the second rope with a vicious German suplex. After several attempts, Mickie successfully hits her signature DDT to retain the Knockouts World Title!

After the match, former Knockouts World Champion Deonna Purrazzo blindsides Mickie James and lays her out with a vicious attack. Purrazzo gets on the mic and announces that she’ll be enacting her rematch clause at Hard To Kill, LIVE January 8th on pay-per-view!

Tensions between these two warring teams have reached an all-time high as they clash with the World Tag Team Titles up for grabs! Bey uses his quickness to his advantage as he avoids the incoming assault from Gallows. Gallows distracts the referee, allowing Anderson to attack Bey at ringside. Turnabout is fair play as Hikuleo drives Anderson back first into the steel ring post moments later. Anderson hits Bey with an explosive spinebuster before making the tag to Gallows.

Giants collide as Gallows squares off with Hikuleo. Both men are down following a flurry of kicks. Bey soars with a top rope drop kick to Anderson. Bey attempts The Art of Finesse but Gallows trips him up on the ropes. Anderson rolls up him up with a hold of the tights to steal the victory!

.@JONAHISHERE HAS ARRIVED IN IMPACT!

Josh Alexander is in the ring and reflects on his victory over the legendary Minoru Suzuki last Thursday. But he’s still angry because he’s not the one challenging Moose for the IMPACT World Title tonight. Alexander says that he’s going to pull up a seat and watch tonight’s main event between Moose and Eddie Edwards when the lights flicker. JONAH makes his IMPACT Wrestling debut and attacks Alexander from behind, taking him out with a series of jumping sentons! JONAH does serious damage to Alexander with not one but two top rope splashes.

It’s main event time at Turning Point as one of the greatest rivalries in IMPACT history is renewed in Full Metal Mayhem for the IMPACT World Title! There are no disqualifications, no countouts and weapons are legal. Eddie sends Moose through a table early with a back body drop over the top rope to the floor. On the other side of the ring, Eddie hits a dive through the ropes. Moose turns the tide with a powerbomb on the unprotected ramp. Eddie catches the leg of Moose, then delivers a Death Valley Driver into the apron. Moments later, Moose powerbombs Eddie through a table at ringside. Moose wraps a steel chair around Eddie’s head and drives him into the ring post. Eddie avoids an incoming chair shot, giving him the opportunity to build momentum. Eddie hits a sunset flip powerbomb off the top of a ladder, through a ladder.

Eddie connects with the Boston Knee Party for two. Both men are down after exchanging kendo stick shots to the head. W. Morrissey comes to the ring and assists Moose. Matt Cardona evens the odds as he brawls with Morrissey to the back. Eddie exposes the wooden boards underneath the ring but it ends up costing him as Moose hits a Uranagi, followed by the Spear to retain the IMPACT World Title!