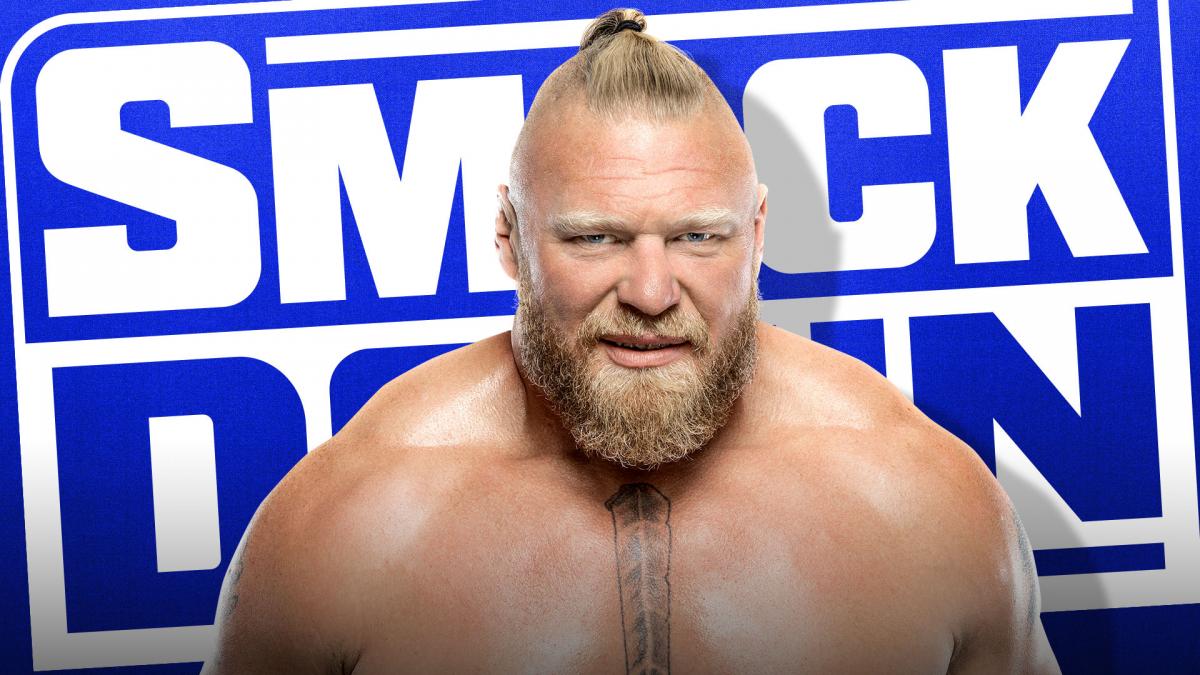 SmackDown starts with highlights of last week’s show. With Sami Zayn winning and Lesnar being reinstated.

Brock Lesnar’s music hits and he makes his way to the ring. Fans started chanting “Suplex City”. Lesnar he says that he’s here tonight for one reason and one reason only, the Universal Championship.

Sami Zayn’s music hits and he comes out. Zayn says finally that their paths are crossing. Their careers have been so parallel. Fans start booing him. He says that they are both Canadians alpha males doing their business. Zayn says that he is a fan of Brock and loves the look going on right now.

Zayn goes on to say he’s the locker room dealer and he is the next in line to take on Roman Reigns. Lesnar says “Let me get this straight, I get suspended and you become the #1 contender?” Zayn laughs it off, and says that once he wins the title at Day 1, he will give Brock his shot. “Who’s playing you?” Brock asks.

“Why would you wait until Day 1 to fight Roman? Why not tonight in San Antonio? Zayn says he doesn’t want to do it in Texas and that he is not prepared. Zayn says that it’s not a bad idea and he feels like he needs al little more preparation. Lesnar insists tries to convince him to fight Roman tonight. Brock then corners and forces Zayn to say yes in fighting Roman tonight. Brock told Zayn that he will be by his side tonight. Zayn said he will become champion tonight.

After commercials, Sami Zayn is backstage with Sonya Deville. He says that he’s not prepared for the fight tonight. Brock sneaks up behind him. Zayn tries to get out of the match, but Sonya Deville makes the match. Brock gets to face the winner at Day 1.

Early in the match, Sasha avoided the Kirifuda Clutch from Shayna. They exchange a few moves, then Shayna applies an ankle lock on the ring apron. Sasha fights back and jumps from the top rope to the outside on Shayna. She throws Shayna in the ring, and covers, 1,2 but she kicks out.

Shayna nails Sasha with the knee in the corner, 1,2 but she kicks out. Shayna in control…

Sasha fight back and takes control. Tornado DDT by Sasha, 1,2 and Shayna kicks out. Kirifuda by Shayna. Sasha counters and applies the Bank Statement. Shayna gets out and delivers another knee on Sasha. Sasha fights back and rolls her up for the win.

Sonya Deville is shown talking to Adam Pearce on a video call. She tells hims about the Brock situation. He tells her that she has it under control and hangs up.

Drew McIntyre tells Sonya that the next time she seems Adam Pearce, to tell him that Drew is looking for him. He holds up his sword.

If you’re happy and you know it clap your hands. Moss was bragging how he was eliminating people left and right last week. Corbin makes fun of Jeff Hardy about how he forgot Sami Zayn. What would you all Jeff Hardy if you were a woman with a child? A Swanton Mom. And they laugh at their own joke.

They go on to make fun of Drew McIntyre. What do you call drew McIntyre checking a Battle Royal list? A Scottish Warrior.

Drew’s music hits and he makes his way out. Jeff Hardy runs in and delivers the Twist of Fate. Drew and Jeff clean house and celebrate by wearing Happy Corbin and Moss’ hats.

WWE hypes up the debut of Xia Li. She will be in action next week on Friday Night Smackdown.

The Viking Raiders vs. Los Lotharios

Erik starts off against Angel. Ivar with a slam, they double team Angel. All four men are fighting. Humberto launches himself at Ivar to the outside.

Guitar starts playing and it’s Shinsuke Nakamura and Rick Boogs at ring side.

Distraction by Boogs playing the guitar caused the ending with Humberto rolling up Erik for the 1, 2, 3. It was a pretty quick match.

After the match, Boogs plays the guitar again and The Viking Raiders start dancing with them.

Toni Storm is interviewed backstage. She says that she is not afraid and not impressed by Charlotte. She ends the interview by saying “Toni Storm, Smackdown Women’s Champion”. She leaves the interview in full confidence.

The Usos cut little promo before the match. They starts saying “Sami Zayn, what’s wrong with you, challenging the Head of the Table?” They said there is one man to fear here at SmackDown. The Head of the Table, the Universal Champion, Roman Reigns. Jey says he will smash Woods’ spirit tonight.

King Wood’s comes out. He said considering the Usos don’t like surprises, he has one tonight. “Ladies and gentlemen, I bring to you, the Head of the King, Sir Kofi Kingston.”

Jey goes after Woods with a kick in the mid section. Waist lock by Jey, followed by a neck breaker. Jey is taunting Kofi who’s on the outside. Woods delivers a chop followed by a right hand and another chop. Woods rolls down and jumps with a clothesline. Baseball slide by Woods. Woods gets pulled to the outside by Jimmy Uso. Bell rings for disqualification. Kofi gets involved. Woods and Kofi hammer away on Jey, then Jimmy pulls him away.

Roman is shown sitting backstage watching the match with Paul Heyman beside him.

“So Brock is bad and Adam Pearce is not here, a lot of things are going on tonight.” Roman Reigns questions whether Heyman knew about Brock. Heyman denies everything.

Backstage – King Woods and Kofi barge in to get interviewed by Kayla Braxton. Kofi says just like the Usos destroyed the crown of the King, they will destroy the tag team champions at Day 1.

Charlotte starts talking about Toni Storm. The only easy way to get noticed in this division is to challenge Charlotte Flair. The most decorated women in WWE. She knows exactly what Toni Storm is doing. She said that even acknowledging Toni is a lot. She said that if it’s that easy to embarrass Storm with a pie, imagine what Flair can do to her in the ring. Flair said that when she said Storm is not on her level, it wasn’t being mean, it’s a fact she said. Flair rejects Toni Storm’s challenge int he end and walks away.

As Charlotte was walking back the ramp, Toni Storm sneaks up and throws a pie in Charlotte’s face.

Lock up and take down by Sheamus. Cesaro gets up and gets cornered. Both men exchange uppercut. Sheamus delivers a back breaker. Sheamus hammers on Cesaro while on the apron. Sheamus covers, 1,2 but Cesaro kicked out. Cesaro fights back and hammers away on Sheamus and clothelines him to the outside. Cesaro with an uppercut that drives Sheamus over the rail.

Back in the ring, Sheamus kicks him int he face and covers, 1,2 but Cesaro kicks out. Back on their feet, they exchange a few moves, then Sheamus with a Brogue kick out of nowhere and covers for the win.

Naomi confronted Sonya backstage. Naomi challenges Sonya once again, asks her if she is scared or not. Sonya says “Sure, I’ll give you the match… that is when I decide to take off this suit”. Sonya says that she is the boss, and if Naomi lays a finger on her, she will make sure that Naomi doesn’t have a pay check. Naomi asks if she has her match, and Sonya accepted. Sonya then she slaps Naomi.

Sami Zayn is in the ring and says that he has something to say. he said that Texas is his least favorite state in America. He ever dreamed that he would wins his first Universal championship in Texas. Sami says that he will shock the world tonight. he is going to upset Roman reigns. he is walking out of San Antonio as the WWE Universal Champion. When that happens, he doesn’t have the fans to thank. The only person he has to thank is Brock Lesnar.

Brock’s music hits and he makes his way out to be at ringside for this match. Brock is in the ring and Sami tells the fans to “Make some noise for Brock Lesnar!” Sami indirectly asks Brock to help him out in this match. He tells Brock that he could have an easier opponent at Day 1. Sami says that Brock hasn’t done well against Roman lately. Brock delivers a couple of German suplexes followed by an F5. Picks him up and delivers another F5. Brock picks up Sami and puts him in the corner and pats him on the shoulder for good luck in his match against Roman Reigns.

Brock leaves the ring to the backstage area.

Roman Reigns makes his way to the ring with the Usos. Sami Zayn was standing in the corner still beat up.

Reigns spears him and chokes him out with a guillotine for the win. The match was 16 seconds from bell to bell.