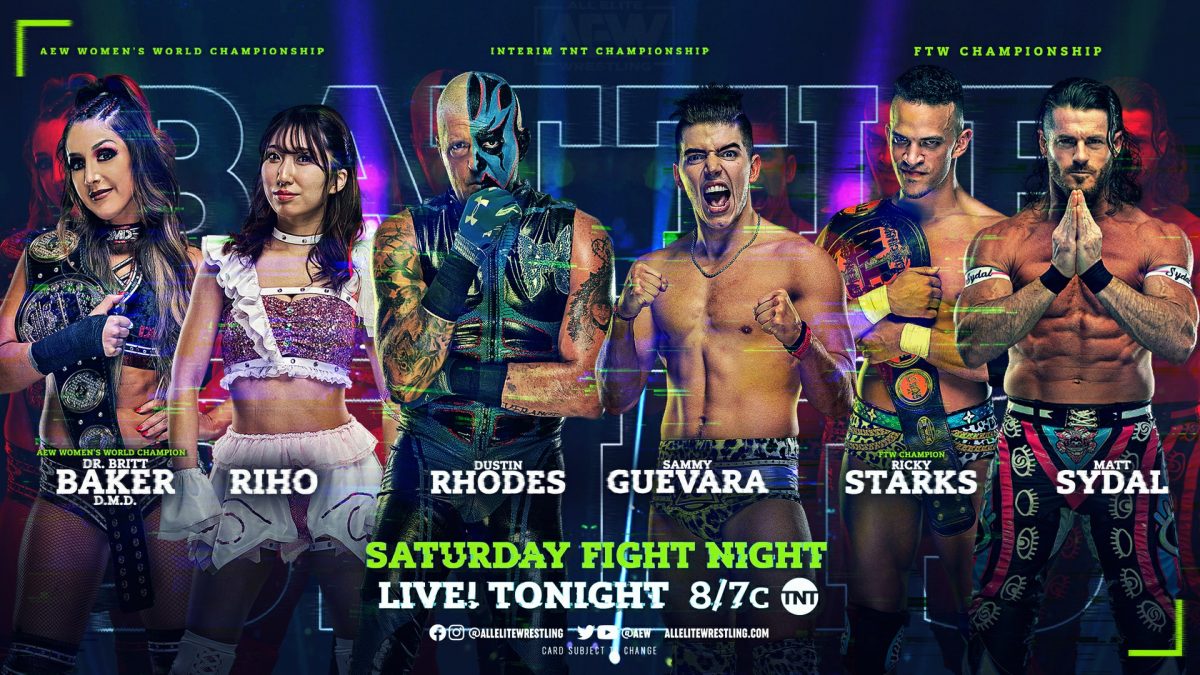 Results by Josh Boutwell of WrestleView.com

Dustin and Sammy mat wrestle back-and-forth early on and Dustin acts like he’s winded and blown up early. Sammy catches Dustin with a La Magistral fro two and then backflips over Dustin and taunts Dustin as Rhodes again kneels down and acts like he’s catching his breath. Sammy hits a dropkick knocking Dustin to the floor and then tosses him into the barricade. He taunts Arn and Arn flips him off in response.

Dustin lights Sammy up with chops and slams Sammy’s knee into the ring steps. Dustin Piledrives Guevara on the floor! Sammy is almost counted out but dives back in before the 10-count and Dustin covers him for two.

Dustin catches Sammy with a Powerslam for a nearfall. Dustin mounts Sammy in the corner and throws a bunch of rights at Sammy. He acts like he’s going to do the Goldust taunt but stops himself and then goes for a Monkey Flip, but Sammy blocks it and hits a clothesline. Dustin falls through the ropes to the floor and Sammy hits an absolutely insane Double Spring Somersault Plancha!

Sammy hits a Leaping Enziguri back in the ring and then attempts the Cody Cutter but Dustin blocks it and hits the CrossRhodes! 1…2…NO Sammy kicks out! Dustin hits the Code Red for another nearfall. Dustin goes up top but Sammy cuts him off and hits the GTH! 1…2…NO Dustin kicks out!

Dustin rolls to the floor and Fuego del Sol comes from underneath the ring and pulls a table up and sets it up at ringside. Arn Anderson chases Fuego up the ramp and then Sammy attempts a Spanish Fly off the apron through the table but Dustin blocks it with a series of elbows. Dustin hits an American Destroyer off the apron through the table! Dustin rolls Sammy back in the ring and covers him but Sammy still kicks out!

Dustin hits the CrossRhdoes and then rolls through and a second one! Dustin goes for the Tiger Driver but Sammy blocks it and hits a Superkick. Sammy and Dustin then run into each other and both men are down. Sammy and Dustin exchange a bunch of nearfalls with Sammy managing to counter the last one and get a three-count.

After the match, David Crockett presents the title to Sammy and then Dustin Rhodes hugs Guevara. Daniel Garcia runs down and gets in Sammy’s face and attacks him. They fight until referees run out and separate them.

After commercials, Schiavone interviews Sammy backstage but Sammy says he doesn’t give a shit out about Garcia and says he’ll face him on Wednesday night.

Sydal hits a Rana and a series of knees and kicks and a Standing Moonsault for a quick nearfall. Sydal follows up with an inside cradle for another nearfall but Starks stops his momentum with a Side Slam. Starks charges into a heel kick from Sydal that sends Starks to the floor. Hobbs gets in Sydal’s face on the outside stopping him from continuing to attack Starks.

Starks hits a series of clotheslines on Sydal and then a Flying Hip Attack in the corner. He hits a Uranage Suplex for two but eats a series of leg kicks from Sydal. When Starks ducks one of them, he eats a head kick from Sydal instead. Sydal hits a Flying Knee and then a Hesitation Dropkick in the corner. Sydal lifts Starks up to the top rope and then hits a Leaping Rana! Sydal hits a kneeling Michinoku Driver for two.

Sydal misses a Roundhouse Kick but then rolls Starks up for two only for Starks to roll through and lift him up into the air. Sydal escapes and hits a Flying Knee and then goes for the Crucifix Bomb. Starks blocks it but eats a Roundhouse Kick and the Lightning Spiral from Sydal for a nearfall.

Sydal hits Meteoroa off the top but Starks gets his foot on the bottom rope to break up the pin attempt. Sydal misses a Flying Knee and eats the Spear from Starks. Starks hits Roshambo for the pin!

Sydal and Hobbs attack Sydal after the match but Lee Moriarty hits the ring to try and fight them off only to get run over by Hobbs. Dante Martin runs out and clotheslines Starks and then goes at it with Hobbs! He hits Hobbs with an Enziguri and then a dropkick that sends Hobbs falling through the ropes.

Rebel and Hayter distract Riho early on allowing Baker to take control. Riho turns the tides with a dropkick, though and Baker immediately retreats to the floor. Riho goes for a Plancha but Baker moves and Riho takes out Rebel. Baker hits Riho with a Slangblade as Hayter distracted her. Hayter pulls out a table from under the ring and they set it up at ringside. Riho nails Baker with a Snap Dragon and dives off the table into a dropkick on Hayter! Riho hits a Missile Dropkick off the top but as she charges at Baker she eats an STO into the turnbuckles.

Riho hits a Spinning Headscissors on Baker and then a Flying Knee in the corner. She then hits a Drop Toe Hold sending Baker into the ropes followed by the 619 for two. Riho puts Riho in a Half Crab and then bridges back to put more torque on the hold but Baker still gets to the ropes to break the hold.

Baker hits the Curb Stomp! 1….2..NO Riho kicks out! Rebel gives Baker the title belt and the referee ejects Rebel from ringside. Baker and Hayter argue until Riho shoves Baker into Hayter and then hits the Crucifix Bomb and a Bridging Northern Lights Suplex! 1…2…NO Baker kicks out! Riho goes for a Flying Knee but Baker rolls back and kicks Riho. She hits a series of kicks and the Curb Stomp on Riho but Riho kicks out again only for Baker to put her in the Lockjaw and Riho taps!

After the match, Rebel tries to give the belt to Baker, but Hayter snatches it away… but gives it to Baker and all three women hug each other.