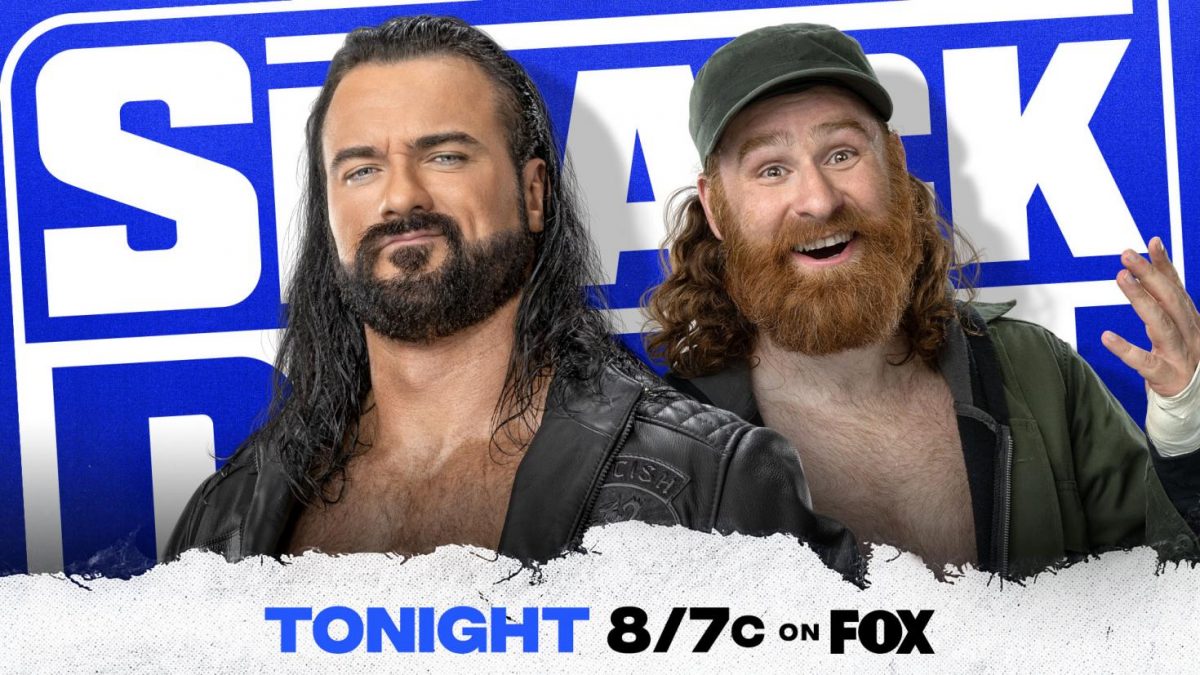 They fight to the top turnbuckle and Sami kicks Drew in the leg and Drew is crotched. Sami climbs to the top of the cage and he starts to go over but Drew grabs Sami by the hair to pull him back in. Drew with a superplex. Drew with a Claymore for the three count.

Drew climbs to the top of the cage with his sword.

We take a look back at the contract signing from last week.

Baron Corbin makes his way to the ring. He mentions we don’t have to deal with his sidekick any more. Baron says nothing dragged this show down more than his awful jokes. Baron says he will show Moss at Backlash that the funniest thing he would say was that he could beat him. Corbin says Moss is living off his Andre the Giant Battle Royal victory but Moss owes him because Corbin molded Moss into the man he is today. Corbin says everything he touches, he turns to gold. Just like he made Moss, he will destroy him.

Corbin says he will destroy the one thing that Moss loves most, the Andre the Giant trophy. The trophy is carried to the ring.

Corbin says he can’t wait to see the look on Moss’ face when he sees his one accomplishment smashed into thousands of pieces. Corbin asks for the sledge hammer and the sledge hammer caddy is Madcap Moss and Corbin does not realize that is the case.

Moss misses Corbin with the sledge hammer but he grabs Corbin and punches him. Moss with more punches and Corbin bounces out of his chair. Corbin avoids being hit with the furniture but Moss with a shoulder in the corner and he sends Corbin shoulder first into the ring post.

We take a look back at Ricochet’s victory over Jinder Mahal a few weeks ago and the challenge made last week by Shanky.

Shanky distracts the referee and Mahal trips Ricochet on the turnbuckles. Shanky gets Ricochet on his shoulders and Ricochet counters with a sunset flip for the three count.

After the match, Mahal yells at Shanky for losing. Shanky tells Mahal to shut up and he walks away.

Kayla Braxton is in the back with Raquel Rodriguez. Kayla mentions Raquel’s debut and she asks if Raquel is nervous. Raquel says she has butterflies but she enjoys being center of attention. She will make an impact that no one will forget.

In the ring, Carodza attacks Raquel before the bell rings and she punches Raquel. The match starts and Raquel with a boot and she lifts Cat in the air with a wrist lock. Raquel with a shoulder tackle and hard Irish whip. Raquel with a fallaway slam and a second one. Raquel with a twisting Vader Bomb. Cat drops Raquel on the top rope and she connects with a knee in the corner. Cat chokes Raquel in the ropes. Raquel blocks a boot and Raquel with the Chingona Bomb for the three count.

Ludwig Kaiser says that Gunther is the embodiment of danger. He will destroy anything that disrespects the ring. Gunther says respect will be taken by the Ring General.

Orton and Riddle have joined Adam Pearce and the official furniture and accessories for a WWE Contract Signing Segment. The Smackdown Tag Team Champions, the Usos make their way to the ring. Adam welcomes both teams to the contract signing.

Adam says they know the rules. There will be four signatures and the match will be official for Backlash.

Jimmy says they have nothing to prove to anyone. Everybody knows that they are the twos and we are the ones. Jey says the Bloodline is going to be dripped in all the gold. Jey says they are going to need bigger luggage and you will be doing a whole lot of acknowledging.

Riddle says he cannot tell the Usos apart. He wants Pearce to give them name tags or let one of them grow a mustche. Pearce says he will take it under advisment. Orton says he has never had a problem telling them apart. Randy says Jey is the right hand man. Orton says Jimmy is nothing but a little bitch.

Jimmy goes over the table and attacks Orton while Jey goes after Riddle. Jimmy punches Orton but Orton with punches. Riddle punches and kicks Jey.

Roman Reigns’ music plays and everything stops. The Usos attack Orton and Riddle from behind while Roman walks to the ring. Jimmy and Jey with a double super kick to Orton and they hit the 1D on Riddle. Roman holds the contract and he rips it up and puts it in Riddle’s mouth. Roman punches Riddle and . . .

Drew McIntyre’s music plays and he makes his way to the ring. Roman tells Jimmy and Jey to go after Drew. Drew clotheslines Jimmy and then he punches Jey. Drew gets on the apron and then he enters the ring. Roman punches Drew and Drew punches back. They exchange punches and Drew with an overhead belly-to-belly suplex that sends Roman to the floor.

After commercials, Adam Pearce is on his phone and Paul Heyman enters.

Paul says he has his minions giving him scoops from the locker room. Paul says that Roman is not very happy. Paul says he wants Adam to have a good relationship with Roman. Paul says it is time to upgrade things for the tag titles. Paul suggests it be RK-Bro and Drew McIntyre versus The Usos and Roman Reigns.

Adam says he can’t change things. Paul applauds Adam and he says he admires a man who will stick to his principles at the expense of his own career to give Paul the ammunition to go to the Board of Directors and file a complaint to deprive the fans of the Tribal Chief at Backlash. Paul tells Adam he can make that match and he will.

We are told that in two weeks, Naomi and Sasha Banks will defend the WWE Tag Titles against Shayna Baszler and Natalya.

After the match, Natalya attacks Naomi but Naomi with a knee and Sasha goes for a baseball slide but Natalya blocks it and slams the knee into the apron. Natalya with a Sharpshooter in the ropes and Shayna with a gutwrench gourdbuster. SHayna stomps on the elbow while Natalya makes Sasha watch.

We take a look at Butch’s match against Xavier Woods from last week.

We are told that Butch has not been seen since last week. We see graphics of where Butch could be.

Ridge Holland is in the back and Sheamus tells him that they need to find Butch. Sheamus says he has put up posters everywhere. Ridge says he got rid of the posters and he put them where Sheamus did.

Woods mentions all of the tag team partners. Woods mentions the League of Nations, the Swiss, and now the guys who don’t know any better. While you are busy shaking it on the outside, I will be in the ring destroying Ridge.

Sheamus tells Ridge he is sick of playing games. Sheamus challenges Kofi to a match.

Kofi avoids the Brogue Kick and Kofi with SOS for a near fall. Kofi goes up top but Sheamus stops him. Kofi with punches and he goes up top. Kofi is met with a knee and Sheamus with a Brogue Kick for the three count.

After the match, Holland sends Woods into the ringside barrier. Holland with forearms. Sheamus gets a table from under the ring and he sets it up while Holland holds Woods against the ring steps. Holland sets for a power bomb through the table and he does it.

We hear the next chapter from Lacey Evans. Lacey says she got kicked out of her home at 17 but she was the first in her family to graduate from high school. She joined the Marines and she was the highest shooter in boot camp. She was at the top of her class in her Military Police class. Lacey says the other recruits were waving to their parents, but that was not the case for her. She says he never once came to the most important things you accomplished in life. It gets to the point where you find a different driving point that fills you with anger.

I wanted to show that addiction was not the only solution. I was not blessed with a lifetime of perks and pats on the back. I never had it and I don’t need it. I made it from the trailer park to the WWE and I am coming after every single one. That has created the woman I am today. I am no better than the other superstars, but they are no better than me. 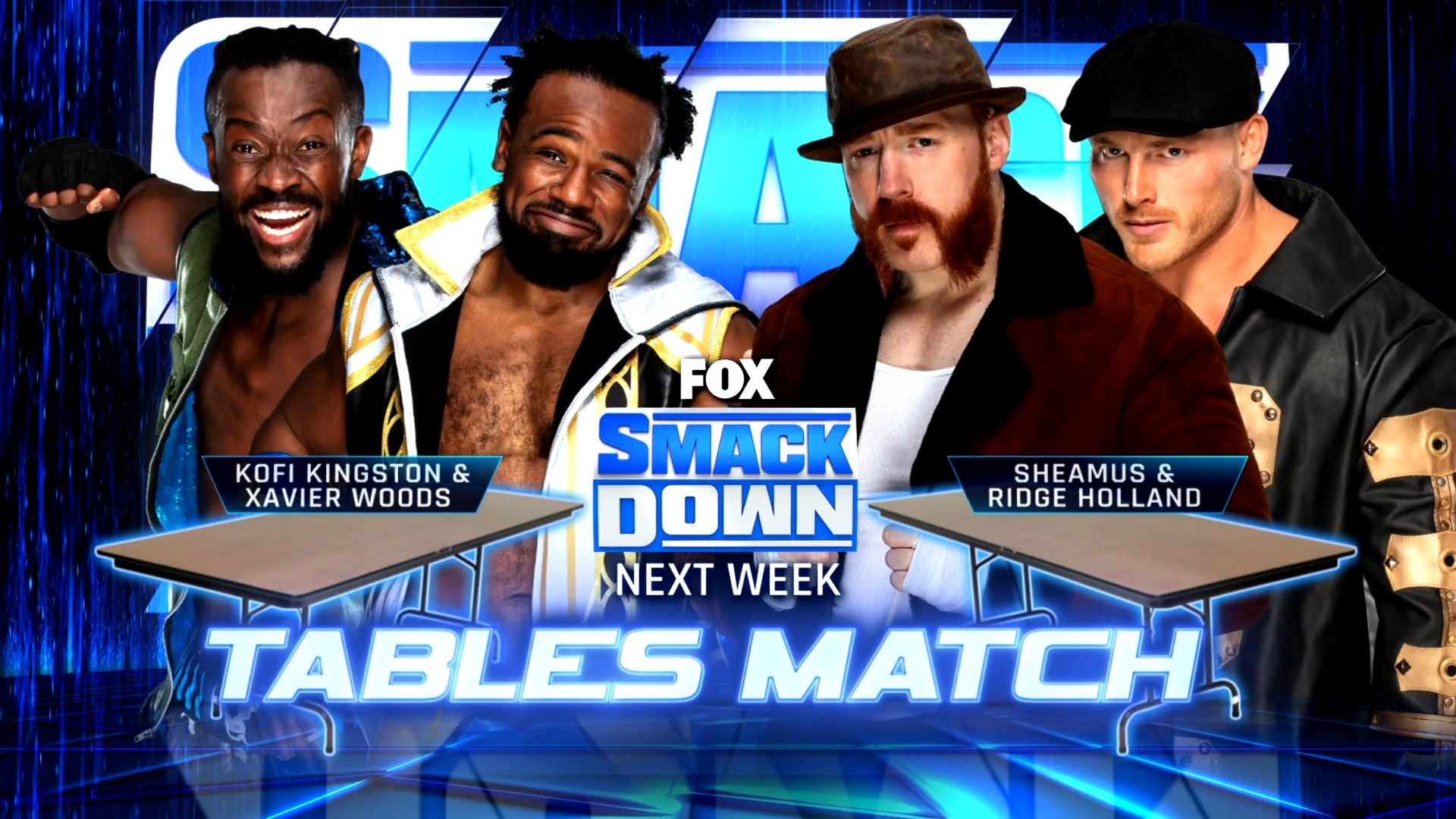 Beat the Clock “I Quit” Challenge
Ronda Rousey vs. Shotzi

The bell rings and Shotzi goes to the floor. Shotzi runs away from Ronda. Ronda grabs the ankle and tries to pull her back into the ring. Shotzi misses a round kick and Ronda with a kick. Shotzi goes to the floor. Ronda blocks a kick from the apron and sends Shotzi face first to the mat. Ronda blocks a kick and takes Shotzi to the mat. Ronda with an exploder slam and then she rolls up Shotzi and applies an ankle lock. Shotzi says she quits.

Charlotte says that was amazing but this will be your last win for a very long time. She tells Ronda to leave and then she tells Aliyah to come out for her ten seconds of fame.

Beat the Clock “I Quit” Challenge
Charlotte Flair vs. Aliyah

After the match, Charlotte leaves the ring and sees her buddy Drew Gulak. Charlotte blames Drew for the loss and asks him how hard is his job. She calls Drew stupid and kicks him in the head. Charlotte slaps Drew and tells him to ring the bell. Charlotte grabs the bell and shows him how to do it. Charlotte hits Gulak in the back with the bell.