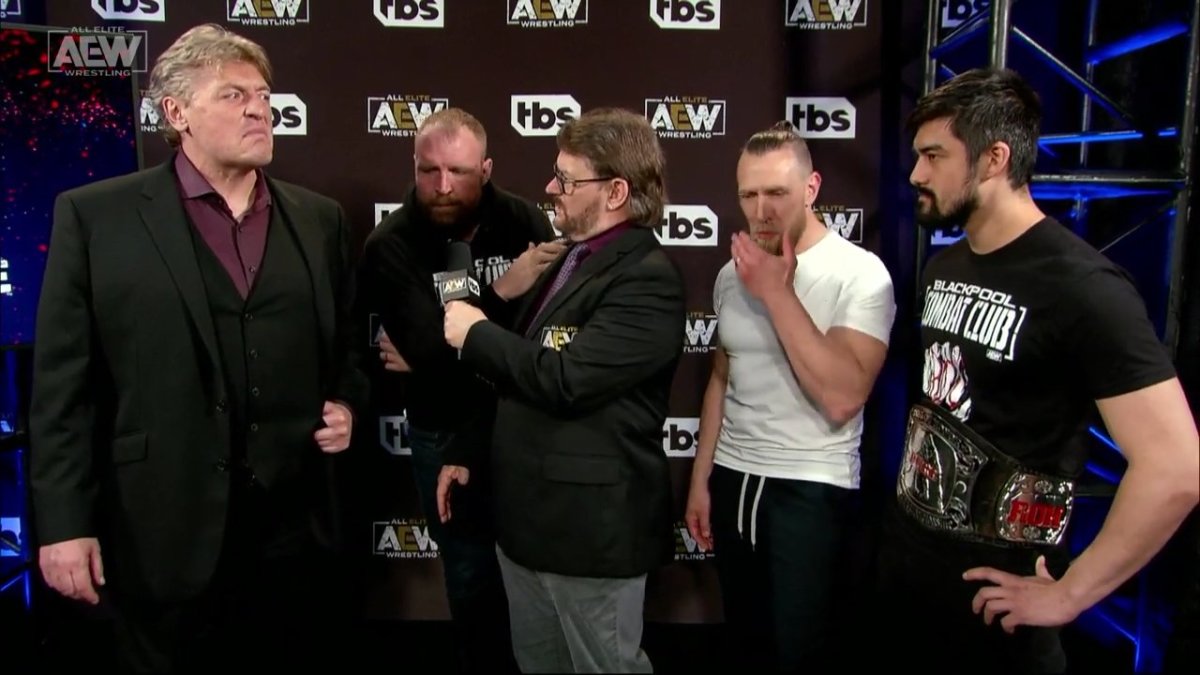 United Kingdom-based newspaper Blackpool Gazette held a recent interview with William Regal. One of the topics discussed included Regal revealing that Jon Moxley was the person who came up with the Blackpool Combat Clun name for the group in AEW.

“I would love to claim it was my idea, but it wasn’t. It was Jox Moxley’s idea. I had just come into the company after being asked to come in by Bryan Danielson because it sounded like a lot of fun. I was initially planning to take a year off, I wasn’t going to do anything because I haven’t done anything other than wrestling for the last 39 years. All of a sudden, I heard Jon’s name was involved which piqued my interest even more and it’s ended up how it’s ended up. Straight away there was a chemistry there because in real life there’s a chemistry there. People know a lot about me and Bryan but they might not know as much about me and Jon but these are stories we can tell over time. Jon came up to me and said he’s got a great idea for a name, because he had come up with different Blackpool things. I told him it’s not about me, it’s about the two of them, I’m just a spare part here and riding on your coattails. But he insisted we called it this.

That meant a lot because Blackpool has given me everything good in my life and I’ve done everything I can do to make sure that, regardless of where I went, I was always billed from Blackpool. I moved there when I was 16, I spent time there as a child on holidays, I started my wrestling career there, I lived in Blackpool for 10 years, I had a house for 12 years, I met my wife there, my first two children were born at Victoria Hospital, everything good in my life came from Blackpool. So Jon and Bryan have always heard me telling these stories and they just wanted to use the name because they feel if it wasn’t for Blackpool, I wouldn’t be wrestling and I wouldn’t be in America. The way they look at it, they wouldn’t have come around if it wasn’t for me. That’s not the way I look at it though, because I feel I’m fortunate to have them in my life, they think it’s the other way around. Bryan has been to Blackpool quite a lot because he wrestled a lot in England for a lot of years, but Jon hadn’t. But he just likes the sound of it. I didn’t think it would go any further than that conversation but then we get to television last week and he showed me his phone and he’s got these designs for different stuff. I replied ‘oh, are we actually going to do this then? This is a thing?’ We went out that night and I had no idea he was going to say it on TV, but he said it and the next morning there are t-shirts out, so I ran with it. When you get an opportunity, you run with it. So that was how it happened.”

TalkSPORT held a recent interview with Thunder Rosa. One of the topics discussed included her thoughts about the online criticisms over AEW’s poor booking of her as AEW Women’s Champion.

“I just know that people are never going to be satisfied with everything that you do, or anything that happens. Bottom line. I’m going to do my best with everything I’m given all the time and people will criticise that too – which is OK. People are going to talk and if they’re talking that means they’re watching. At the end of the day that’s what we’re trying to do. I had a banger of a match with Nyla Rose and I was able to show some sides that I haven’t been able to in years in that ring. It was a dynamic match and something different. David vs Goliath in that aspect.

Everyone is different and there’s always going to be criticism, but whatever is in my hands to make better I will. This match at Double or Nothing, and I say this now, I’m going to show that I am the best wrestler in the world. That AEW has the best women’s division in the world. That’s what I’m here for. Like it or not, I’m the AEW Women’s champion, so get used to seeing my face, get used to hearing my voice and get used to seeing me wrestle in that ring the way that I wrestle.”

A recent K&S Wrestling virtual fan signing event had FTR’s Dax Harwood and Cash Wheeler as the guests. One of the topics discussed included FTR’s thoughts on why they should be included in discussions for greatest tag team of all-time.

Dax Harwood – “Well, no one does come close to us for sure [Harwood joked]. But I disagree [that no tag team comes close to FTR]. I think there are some great, talented tag teams in the world and I think that we should absolutely be in the discussion for greatest tag team of all. I mean how could we not when you’re the only tag team to hold the WWE NXT, WWE Raw, WWE SmackDown, AEW, AAA, Ring of Honor and did I say AEW World Tag Team Champions? And we also were voted number one tag team in PWI’s magazine, the first-ever tag team to do that.

Harwood – “I was saying earlier how many texts we got about wrestlers telling us how they cried watching us [wrestle in the Owen Hart Foundation tournament qualifier] so that’s awesome. Thank you.”

Wheeler – “Speaking of T.J. [Wilson], he was the one that sent us a text. It was really cool because obviously… that history.”