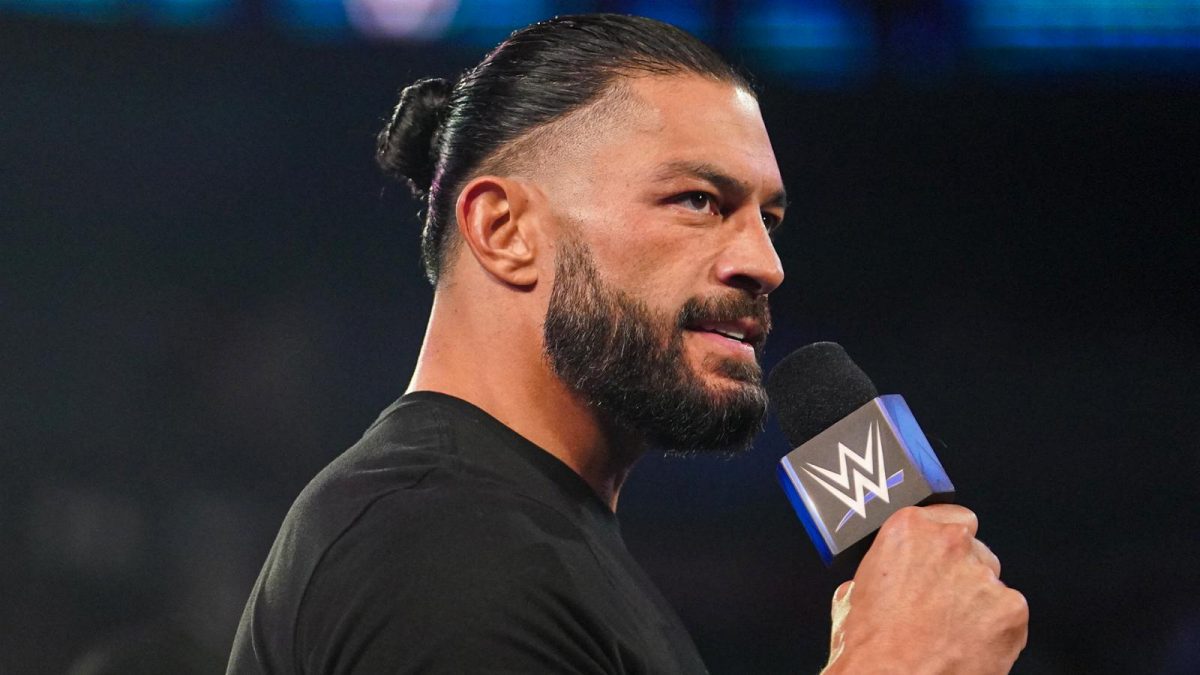 As noted before, Roman Reigns recently signed a new contract with WWE which included terms for Reigns to work fewer dates going forward. Reigns is currently scheduled to work at WWE’s stadium events and a few television tapings during this upcoming summer period.

WWE recently announced that Reigns will be making an appearance at their July 22nd SmackDown event in Boston, Massachusetts, their July 25th RAW event at Madison Square Garden in New York City, New York, and their August 19th SmackDown event at the Bell Centre in Montreal, Canada.

In regards to potential opponents for Reigns’ Universal and WWE Championships at WWE’s stadium events this summer, Dave Meltzer reported in this week’s Wrestling Observer Newsletter that his sources stated that WWE officials are currently planning for Riddle to be Reigns’ opponent for their Money in the Bank 2022 event on July 2nd at the
Allegiant Stadium in Las Vegas, Nevada.

Randy Orton reportedly is currently planned to be Reigns’ opponent for this year’s SummerSlam event on July 30th at the Nissan Stadium in Nashville, Tennessee.

Drew McIntyre reportedly is currently planned to be Reigns’ opponent for WWE’s Clash at the Castle event on September 3rd at the Principality Stadium in Cardiff, Wales.

This past Friday’s episode of Friday Night SmackDown featured an in-ring interview segment with Madcap Moss that was interrupted by an ambush attack from Happy Corbin. This segment resulted in Moss suffering a throat “injury” which required medical attention and Moss being stretchered to the back.

Dave Meltzer reported in this week’s Wrestling Observer Newsletter that his sources stated that the reason for the injury angle was due to WWE officials are currently considering the idea for Moss to be given a new gimmick change. Meltzer reported that WWE officials are also considering giving him a new look as part of this potential new gimmick change due to his recent face turn.

A recent episode of the Unlocking The Cage podcast featured host and WWE RAW commentator Jimmy Smith giving his thoughts about the Sasha Banks and Naomi’s walkout incident during this past Monday’s RAW show.

“We, on-air, had no idea that the main event that I called at the beginning, I’m standing in front of the cage saying — It was a six-woman tag team match including Naomi and Sasha Banks. I announced it as the main event, we showed the graphics, all this stuff. We sit down at the desk and a few minutes later it’s, ‘Scratch that, that’s not happening, it’s Asuka versus Becky Lynch.’ Okay, I want to tell everybody here, and I mean this, when you listen to this show, which is Unlocking The Cage, I don’t kayfabe here. You’ve noticed that. If there is an angle that I can’t talk about, I just won’t talk about it. I’ll never tell you something is real that is part of an angle or a gimmick or a work. I won’t do that on this show. This show is not about that. It’s about the workings of pro wrestling. Sometimes we do cover pro wrestling, but I don’t kayfabe here. I won’t tell you a WWE angle as if it is real on this show if it’s a gimmick. I won’t do that to you. If it’s something I can’t talk about, I just won’t talk about it. What I’m saying is that when I talk about the WWE on the show, you can trust me. I will not push an angle. I will not push a gimmick.”

Smith also denied the rumors of Banks and Naomi’s incident just being an elaborate work by WWE.

“This is not a work. This really actually happened. From everything — I wasn’t there, I was calling the show — I’ve been told, everything the WWE is saying happened. Now obviously there are many sides to a story. I don’t know why Naomi and Sasha Banks walked out. I’ve heard rumors, but I’m not gonna repeat them just because it’s innuendo. I don’t know. But my point is, a lot of people when this was first released on Instagram, half the comments were, ‘Ah, this is a work.’ It’s not. This legitimately happened. One thing that you will see in the WWE, generally, in the time I’ve been there, is when they say this is our main event, something goofy may happen in that event, something goofy may change or there might be slight differences. They’re not going to say this is our main event and pull the rug out from under you. They will not advertise a main event and pull it out from under you. They want to know that you as an audience member will generally get the match that you thought you were gonna get. You stuck around till 10:45 to watch this match, that’s what you’re gonna see. What’s upsetting to the people behind the scenes on this one is they advertised the main event. I got up there on a microphone and Corey Graves to my left said, ‘Tonight, six-woman tag team match,’ and then we sat down and we, meaning the WWE, all of us, couldn’t deliver that main event. Not happy about that. I believe, Kelly, please give me your opinion because you’re a pro wrestling fan. This statement is seething with that, ‘We promised the main event and because of these people we couldn’t deliver.’ You can almost feel that like, ‘Hey, we don’t like that we promised something we couldn’t deliver our fans.’ Is that a fair way to look at it?

It seems as though this is a ‘We’re not letting somebody change the narrative here.’ That they wanted to get their version of events out very, very quickly, to show that ‘Hey, there’s no spin here. This is what happened. You might get a different competing story, but before somebody else spun it in a different way.’ From my perspective what happened was, we get on the air and we announced the main event. We sit back down and just a few minutes into the show, ‘Hey, big change. It’s Asuka versus Becky Lynch.’ Our whole show format, they all had six-woman tag in there, all of them. As we went through the show, they change those to Becky Lynch versus Asuka. You don’t do that last minute, folks. You don’t voluntarily change something huge in the main event. All your graphics have to change. All your segments have to change. All your timing changes. Everything changes. You don’t do that, ‘Oh, because we felt like it.’ That does not happen.

So as we’re dealing with all these changes… Corey graves mentioned them leaving the building multiple times during the show. ‘Sasha Banks and Naomi summarily and unprofessionally walked out.’ Graves said that over and over and over. I thought at the time, remember, I don’t know what’s going on until the show’s over. I thought he was just doing heel stuff. Basically. I thought Corey was just burying them because that’s what he does to babyfaces, right? No, no, no, they knew something was wrong, and it was once again getting that story out. Why they left? I don’t know. But I’m telling you from a broadcast perspective, we had no idea this was going to happen. Once it did happen. It created a lot of problems that I thought our producers dealt with extremely well, but it created a lot of problems.”

Smith also gave his thoughts about WWE releasing a public statement over the backstage walkout incident.

“I didn’t know about this statement that the WWE had sent out until I was backstage. I assumed as an athlete, that something physical happened during a warmup. That they were getting ready for the match and Naomi pulled her hamstring… That’s what I thought it was. I had no idea that them walking out, which is what we said on air really happened. I didn’t know that until after the match was over. Not until the whole frickin show was over. I can’t tell you why. I can’t tell you the thought process. I can tell you what we know from that statement, which is they were upset for some reason and walked out. I can tell you the WWE was completely unprepared for it. I can tell you the broadcast team, myself included, were completely unprepared for it. Becky Lynch and Asuka, I thought, had a great match to fill in that main event spot. They deserve a lot of credit for that… These two ladies are unbelievable professionals. So they really filled in well. All I can tell you from my point is this is 100% genuine. You may doubt it, but it’s 100% genuine.

So where does that leave them? It’s hard when something like this becomes so public… I don’t know Vince McMahon personally. I’m in meetings with him every week, but I don’t know the man personally. I know what you know, which is, ‘Get the events that we promised the fans then we will deal with anything else no matter how difficult, no matter how dramatic the problem is… Get the main event that we promised out there for the people.’ That didn’t happen last night. So when you look at it that way, how do Sasha Banks and Naomi come back from this? I don’t know because this is not — If this were inside baseball, If the WWE had never released a statement about this, I would not be talking about it right now. Wouldn’t be a public issue. You know, like, that’s behind the scenes. I generally don’t talk about behind-the-scenes stuff. I don’t give away angles, any of that. This is now incredibly public in an almost unprecedented way.”