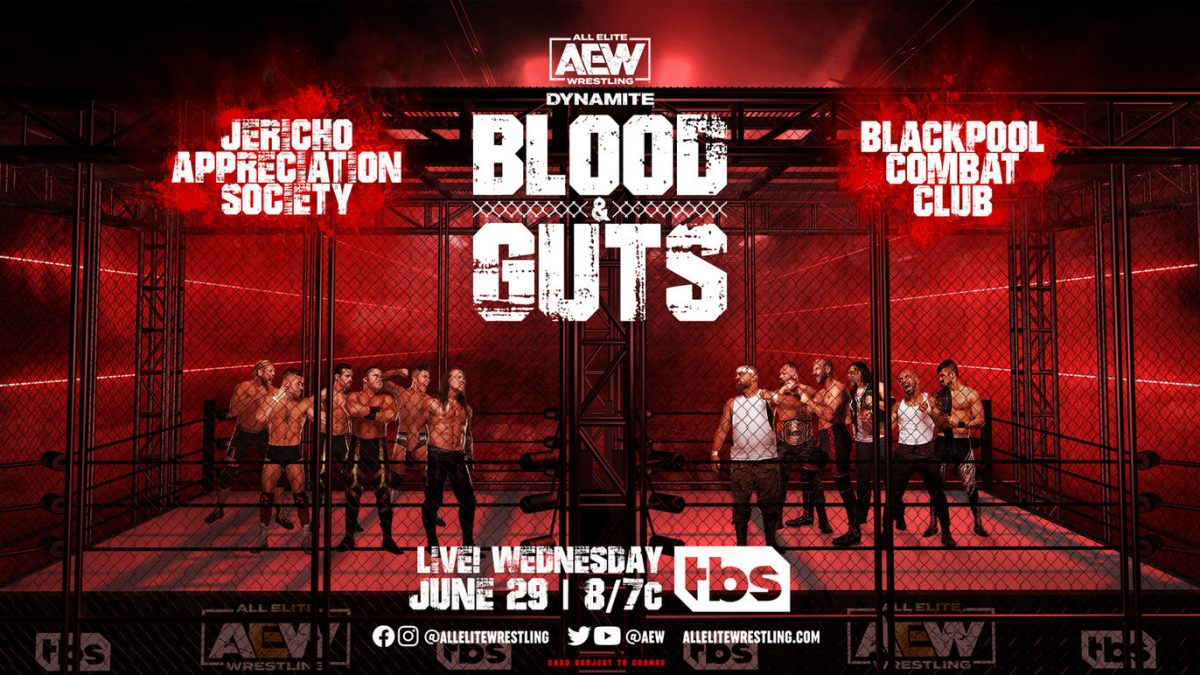 Dave Meltzer reported that his sources stated that several AEW talents were unavailable for AEW’s Blood & Guts 2022 show last night due to them currently dealing with COVID-19 related issues. Meltzer reported that this was the main reason why very little of the card for the show was announced ahead of time due to AEW officials being very concerned over the COVID-19 situation within the company.

“There were a lot of people who were not available for the show because of Covid. That’s why they did not announce the show until pretty much (Wednesday) other than Blood & Guts. They didn’t announce much of the show ahead of time because literally the show was being put together..

The show was being put together late because of fears and things like that. That’s why some of the matches, besides the Blood & Guts match, the matches themselves are not exactly the usual… you know, Jade Cargill and Leila Grey, although there was a reason for that as it played out.”

A recent episode of the AEW Unrestricted podcast featured co-host Tony Schiavone’s thoughts about the current injuries woes in AEW. Schiavone also revealed that Samoa Joe’s current absence is not due to an injury but instead due to him currently working on an outside project.

“One of the most challenging things has been the injuries we have had here in AEW. It’s kind of amazing. It’s a challenge to really be able to put on a show when you don’t have your big stars and it’s not to say that we don’t have big stars left because we do but, we don’t have CM Punk right now, we don’t have Bryan Danielson, we don’t have Kenny Omega, Kyle O’Reilly is out, Samoa Joe is off doing a project. Adam Cole has been hurt again. Dax Harwood of FTR is not hurt, but he is banged up. You may see the shoulder tape that he has on. Jungle Boy’s not been around for a little while, MJF walked out. So it’s been a challenge really to put together a TV show and I know because I’m involved in that process. But, then when you circle back and you think about what we just saw at Forbidden Door, yeah, I know there was a lot of Japanese stars from New Japan Pro-Wrestling there and some American stars and obviously, some stars internationally but, it’s been a pretty cool time to be able to say, hey, we’re doing well despite.”

CEO Gaming held a recent stream on Twitch featuring Kenny Omega as the guest. One of the topics discussed included Omega revealing that he is “done” if he suffers another major setback during his current rehab from injuries.

“If I get another major setback, that’s it. That’s it, I’m done, I can’t do this ever again. Two times, three times a day, really painful rehab, not even knowing what it’s going to be like when I get back in the ring. I have no clue. It’s scary, actually. You see people, they come back to the ring and you’re just happy to see them back. There is a different kind of expectation put on me, and I think that anything less than what they are expecting, which is already unrealistic, is going to lead to a lot of ridicule, which is what I get every day anyway. You can probably understand and imagine how difficult it is, struggling twice, three times a day, trying to get things to work that maybe never worked before, and trying to re-route things in your brain to get around the things that aren’t going heal. People think, ‘Kenny is hurt, he took time off,’ snap your fingers, I come back and I’m 100%. Life doesn’t work that way. Bodies don’t work that way. Athletes don’t work that way. It’s very difficult to formulate a plan and to execute it. We’ll see how I do.”

In regards to Omega’s “done” meaning, it was later discovered on r/SquaredCircle that the clip of Omega’s comments was taken out of context. Instead of him implying he would be retiring, Omega mentioned about going in a new direction for his rehab if he suffered another setback.