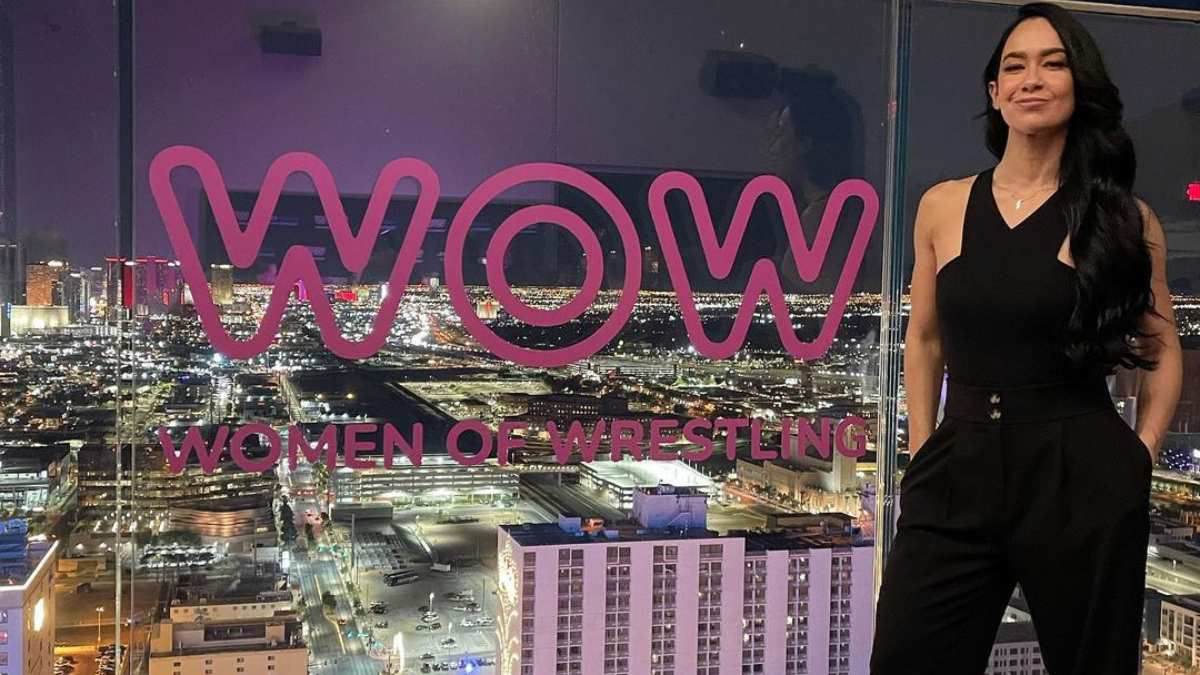 A recent episode of The Sessions with Renee Paquette podcast had AJ Mendez, former AJ Lee in WWE, as the guest. One of the topics discussed included her thoughts on Women of Wrestling’s current plans when it comes to the building of their roster.

“I think the biggest thing, sort of the M.O. is just that everybody gets along [in Women of Wrestling] and that it’s a safe, comfortable, inclusive environment. So our entire cast is so diverse. We have all different cultures, all different shapes and sizes, all different experience levels coming in. Some people have been wrestling for ten years, some have been wrestling for ten weeks and it’s just really fascinating to see. It’s every kind of woman on TV being a different kind of role model and the goal is to show that superheroes come in so many different packages and a woman can be a superhero in so many different ways.”

“We [Women of Wrestling] are doing I believe 12 shows in this three-day — we’re doing about 52 shows, but we do 12 in like a three-day shooting session every month.”

Thursday’s episode of Impact Wrestling’s Impact! featured the official announcement of former AEW talent Jack Evans making an appearance for the company at their Slammiversary 2022 event on June 19th in Nashville, Tennessee. It was announced that Evans will be competing in the Ultimate X match for the X Division Championship at the event. This will be Evans first time appearing in Impact since September of 2018.

Brian Pillman Jr. announced on Instagram that his mother Melanie Pillman passed away this past Wednesday. Pillman was the widow of legendary wrestler Brian Pillman and was most known in wrestling for her appearance on the Dark Side of the Ring episode about her late husband and her involvement in the memorable “Pillman’s Got A Gun” segment involving the Pillman family and Stone Cold Steve Austin on the November 4, 1996 episode of WWF RAW.

MLW also announced that Scarlett Bordeaux will be making her official debut for the company at their upcoming Battle Riot 2022 event on June 23rd in New York City.

As noted before, Wrestling Entertainment Series recently announced that they have postponed their upcoming debut event in Nottingham, England to July 9th due to scheduling-related issues involving The Queen’s upcoming Platinum Jubilee celebrations in the country. Chelsea Green, Deonna Purrazzo, Steve Maclin, Matthew Rehwoldt, and Tenille Dashwood all recently announced on Twitter that they will be unable to appear at WES’s rescheduled event due to schedule and travel related issues.

As noted before, Matt Cardona suffered a torn biceps injury during an event for Game Changer Wrestling this past Saturday. During a recent interview with the Busted Open Radio podcast, Cardona stated that despite his injury, he will still be making an appearance in some capacity for the National Wrestling Alliance at their upcoming Alwayz Ready event on June 11th in Nashville, Tennessee.

The NWA recently announced that Bully Ray will be making an appearance for the company at their Alwayz Ready event on June 11th in Nashville. It was announced that Ray will be working as a special guest commentator for the NWA Women’s World Championship match at the event.

As noted before, former wrestler Tammy Sytch was arrested this past May in Florida following a police investigation into a fatal car accident involving Sytch this past March. PWInsider’s Mike Johnson reported that a trial date for Sytch has yet to be officially scheduled but Sytch is currently scheduled to appear before the court for a private pre-trial hearing today.

Deadline.com reported that WWE talent Liv Morgan will be joining the cast of an upcoming new horror film titled The Kill Room, which is currently in production by Yale Entertainment.

Deadline.com also reported that AEW talent Samoa Joe will be joining the cast of Peacock’s upcoming new video game-based television series titled Twisted Metal. It was reported that Joe will be playing the duo role of Sweet Tooth alongside Will Arnett.