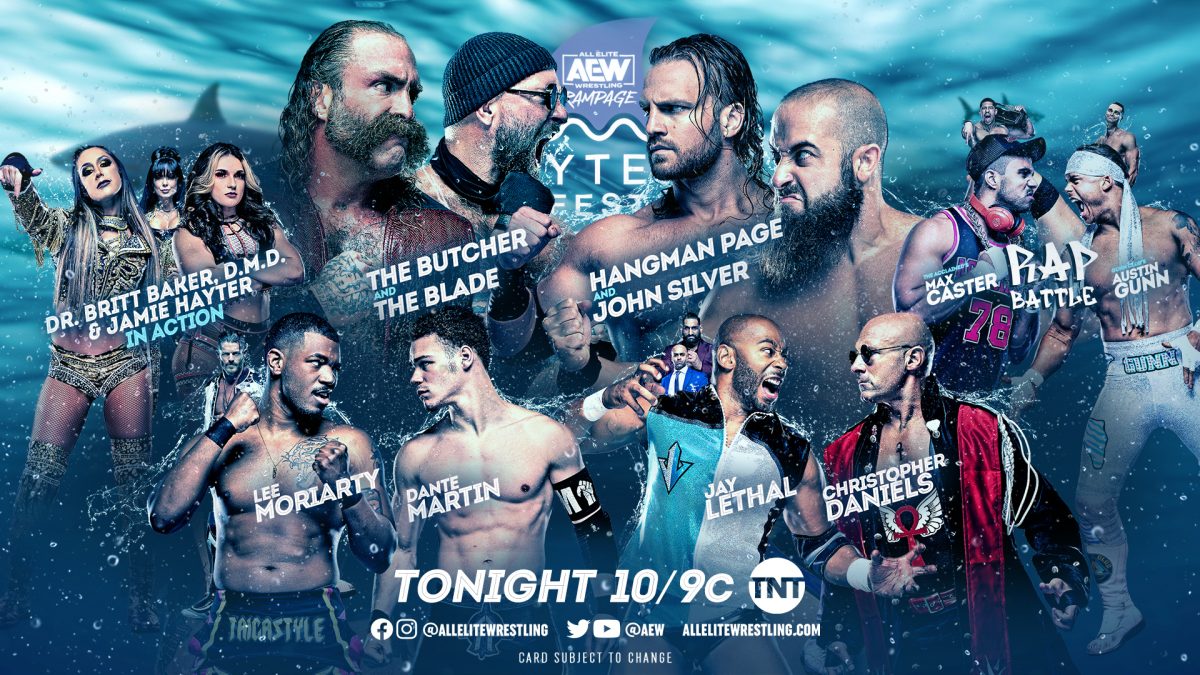 Hangman Page & John Silver vs. The Butcher & The Blade

This was a relatively short match. At the end, Hangman set up Butcher for the Buckshot, but Blade grabbed his legs. John Silver then jumped off the apron with a flipping senton to take out Blade, then Silver and Page doubleteamed Butcher and Page nailed him with a Buckshot Lariat for the win.

#ROH Pure Champion @WheeleYuta crossed a line! #JerichoAppreciationSociety‘s @GarciaWrestling is set on taking Yuta’s title, when they go 1-on-1 TOMORROW at #DeathBeforeDishonor LIVE on PPV! Available on @BleacherReport, @ppv_com + more!

Tune in NOW to #AEWRampage on TNT! pic.twitter.com/oQjKxxLwIo

Yuta and Garcia cut video promos ahead of their ROH Pure Championship match at ROH Death Before Dishonor tomorrow.

Claudio cut a promo ahead of his ROH title match against Jonathan Gresham at the ROH PPV tomorrow. He said that a world title has eluded him for his career. He said Gresham calls himself the best wrestler, but nobody can hold a candle to Claudio. He will beat Gresham tomorrow and become the new ROH World Champion. Quick promo.

Tully Blanchard Enterprises were looking on from elsewhere in the arena.

Tune in NOW to #AEWRampage on TNT pic.twitter.com/yhm868W1WN

Wardlow said that he’ll “beat the shit” out of anyone in pro wrestling, and he welcomes anyone into Wardlow’s world to find out where they stand.

Matt Sydal accompanied Moriarty at ringside, but Stokely Hathaway was watching the match from the entrance ramp and clapping for Moriarty.

This was another pretty quick match. Moriarty was aggressive during it. In the end, Martin went for the Nosedive, but Moriarty moved. Martin tried an O’Connor roll, but Moriarty reversed it into a rollup of his own and grabbed the ropes for leverage for the win. Stokely looked pleased.

After the match, Matt Sydal got on the mic and said he didn’t think Moriarty was desperate enough to take the low road. He believed in him, but now he believes he’s gonna have to kick his ass… next week on Rampage. Moriarty walked down the ramp. Stokely offered him a business card, but Moriarty smiled and walked off without taking it.

Deeb and Martinez cut quick promos ahead of their ROH Women’s title match at the ROH PPV tomorrow.

Baker and Hayter controlled most of this match, which was another quick one. In the end, Hayter hit a backbreaker on D’Amboise, then tagged in Baker, who hit a butterfly suplex. Hayter nailed D’Amboise and Baker locked on the Lockjaw for the win.

They aired a vignette for Ari Daivari, the former Ariya Daivari, who is “coming soon.”

Rapper Lil Scrappy was the judge. The Acclaimed and Gunns had random guys with them in the ring.

Gunn went first: “Look, I’m not scared of you mister. Why would I be scared of one of Bobby Lashley’s sisters? Here’s a secret, you dated Kris Stat. Let me tell you where you went wrong with that. I’ll give y’all a teaser. It’s cause Edward Scissorhands over here couldn’t please her. Before you talk about Daddy Ass, you’re dad is Rich Caster, so how about we talk about which dad’s career ended faster? He played tight end, Bowens is that giving you a fever? When y’all two role play, is that why you’re always the wide receiver? The Acclaimed and the Gunns, I’ll end it right here in Georgia. So have a great day and I got two words for ya.”

Caster was next: “Yo, yo, yo, listen. On the mic, I’m untouchable, you only playin’. You rapping, that’s cultural appropriation. A white guy with a tough little rap voice, your whole style’s booty, that’s why they call you Ass Boys.”

Austin went again and ended with, “by the way, John Cena wants his gimmick back.”

Caster: “Austin Gunn, wow, you never thought to run. I been hot since your dumb dad was called the One. I’m the real star player, on the Hawks I’m Young. I serve you and your chick with my awesome tongue. I thought you had heat, you weren’t smoking me once. Bowens got a bigger spark when he’s holding a blunt. Now I give it to you raw so you closer to done, serving you is the only way I’m owning a gun. I beat you, Colten and Billy from Oakland to Philly, choking you silly.” And he kept going for another few seconds… don’t feel like typing anymore. In the end, he called Austin an “Ass Boy” again.

Austin tried to go again, but he looked upset and defeated. He screamed, “I am not an ass boy!”

Scrappy said that the Acclaimed won, and Billy Gunn punched him, and a big brawl broke out between everyone. The Gunn Club came out on top of the brawl and hit Caster with a trash can.

Mark Henry did his usual backstage interview before the match.

After the match, Sonjay Dutt stomped on Daniels, and Satnam Singh picked him up and gorilla slammed him onto the floor. Lethal locked on Samoa Joe’s choke hold on Daniels on the floor as Sonjay Dutt shouted into the camera. Weak Rampage this week…