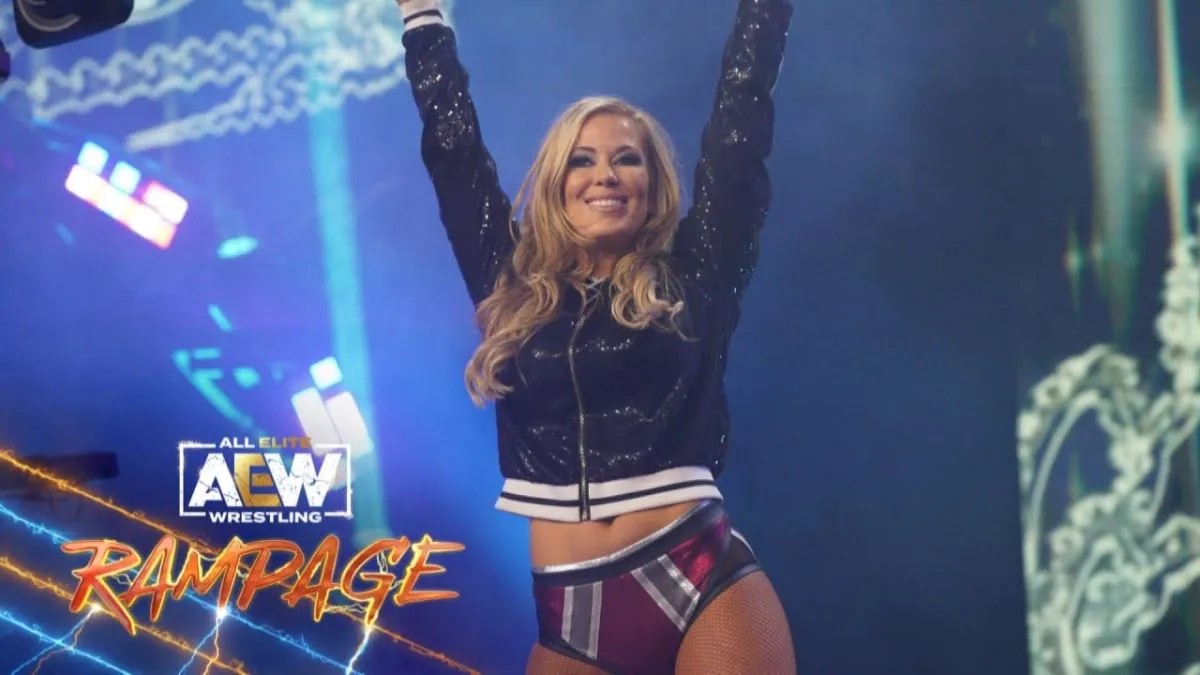 A recent episode of the Busted Open Radio podcast had Madison Rayne as the guest. One of the topics discussed included Rayne’s thoughts on her decision to join AEW following her recent departure from Impact Wrestling.

“I mean, that’s kind of it. It was there was an opportunity when AEW came to my hometown and you know what? At this point in my career, I’m searching for moments, right? Especially ones that maybe I haven’t had before and to have the opportunity to… even walk out on the stage in Columbus, Ohio at The Schottenstein Center with friends, family. I haven’t talked much about this, but my dad was recently diagnosed with stage four cancer so, and he’s been a huge wrestling fan. He’s the reason that I got into wrestling so, just the idea to have that opportunity to have a moment there with those people, it was something that I couldn’t pass it up and from that conversation, just the snowball kept rolling and rolling and it evolved into Madison Rayne becoming coach of the women’s division at AEW which still blows my mind to say it out loud. But again, chasing moments and this was a moment and this was an opportunity that I would have been an absolute fool to not capitalize on and take the ball and run with it as best I can.”

Rayne also gave her thoughts on her first day experience working in the company.

“I have [gotten the chance to meet most of the AEW roster] and my first day on the job was last Wednesday in Columbus and I remember… the whole day is still a bit of a blur but in the best way possible. Everybody was so welcoming and warm and kind and they showed me where catering was and showed me — I didn’t have to question anything from the second that I walked in the arena last week and I went home and my husband was like, ‘Okay, tell me everything’ and the only thing that I could verbalize and articulate to him was, ‘I love my job.’ I don’t even know the specifics yet, I haven’t even gotten my hands dirty yet but, I love my job. Just because this entire locker room is so excited every time they show up to work and they want to put out the best product and use this platform that they’ve been given so, I have gotten to dive in? And mentally, yes, I’m making notes and talking to people and having conversations, but I’m also still kind of trying to get my feet settled. So, I’m taking it a day at a time and one show at a time and now also wrestling so I’m trying to pace myself and not get too overwhelmed but also, let’s hit the ground running, let’s go.”

Rayne also gave her thoughts on her main goals as a coach in the company.

“As I’ve thought about, what does the term ‘coach’ mean and what can I do to elevate this already incredibly talented group of women at AEW, my hope is that, I hear a lot of people say, ‘promo work or mic work is such a pain point’ or there is so much they still want to learn to cultivate within themselves or their character and that is my hope. I feel throughout my career, that was one of my strong suits, being able to dive into this character and have fun with it. If I can help other women, or any talent, feel more comfortable holding a microphone and getting the words out and hiding the fact that we’re shaking holding the microphone, if we can be the duck on top of the water who is calm, cool, and collected, even if our feet are [paddling] under the water. That’s one of the big things that is at the top of my priority list in terms of being able to help because I feel it’s maybe one of the stronger points in my career.”

As noted before, Jeff Hardy was arrested this past June in Volusia County, Florida following a drunk driving incident. Hardy has been out of action for AEW since that time due to his current suspension over his DUI arrest.

PWInsider’s Mike Johnson reported that the Volusia County Court recently approved a motion request from Hardy’s lawyer to have his scheduled hearing on August 17th be pushed back for sixty days. Hardy’s lawyer had requested the delay due to needing “additional time to review discovery and compile mitigation.”

Johnson reported that prosecutors for the case did not object to this request and no new court date has been scheduled for Hardy’s next hearing as of the time of his report.

A recent episode of The Sessions with Renee Paquette podcast had Miro as the guest. One of the topics discussed included Miro’s thoughts on the differences between AEW and WWE’s work and travel schedules.

“It’s different, just listening to [Sheamus] and all these guys. Just knowing he’s four or five days on the road, it’s too much. I don’t want to do that, especially right now, knowing that, eventually, I want to do something else. I want to work towards that. After this contract, I thought I was going to be done, but I can go more. It depends. I feel great. I feel my body is getting better and better, it’s not hurting, especially now with working and just having a match once a week. Your body can go so much longer.”

Miro also gave his thoughts about his initial concerns over potential ring rust issues due to AEW’s lesser work schedule.

“I was so afraid of that, but my wife [CJ Perry] always has to remind me, ‘No, you’re good!’ I’ll go and have some tune-ups in California, have a school there, KnokX Pro, it’s not mine, but I go and help the kids. Every now and again, I’ll text somebody to come and get beat up. They’ll come, I’ll beat them up for 20, 30, 40 minutes and I’ll get my tuning, my range, my stiffness back. AEW is cool because none of these guys that I’m working now, I’ve worked ever before and everything happens one time. It’s not like you have house shows. Everything happens right then. I love that. I love a challenge.”