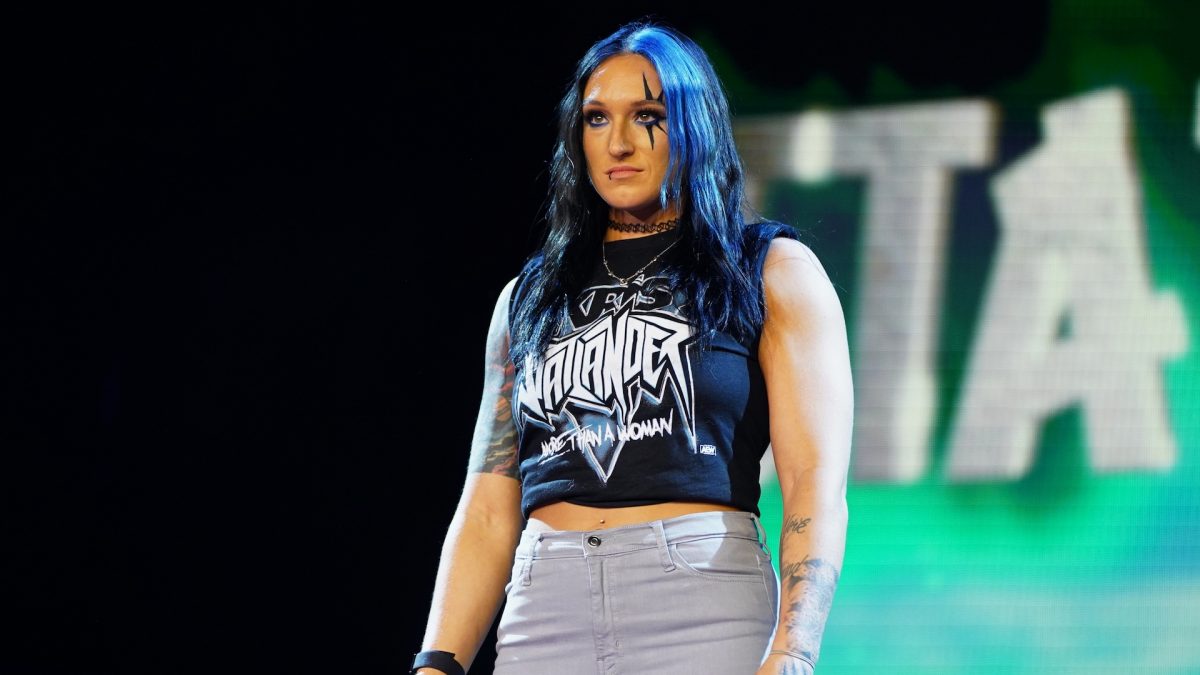 Wednesday’s Quake By The Lake episode of AEW Dynamite featured the official announcement of Kris Statlander will be out of action for the company for the foreseeable future due to her recently suffering a knee injury.

Statlander confirmed on Twitter that her injury was legit and she will be undergoing surgery soon to repair it.

Welp. One knee fixed, one to go. After the first knee injury I came back stronger and better than ever so it’s all over for you all when I come back from this one. I’m sorry to let you all done once again. I’ll be back bigger, more powerful, and more than a woman.

PWInsider’s Mike Johnson reported that his sources stated that Statlander was seen in attendance backstage during last night’s show walking with the assistance of crutches.

A recent episode of the Busted Open Radio podcast had AEW CEO Tony Khan as the guest. One of the topics discussed included Khan denying the recent rumors and reports of AEW planning to hold two-day pay per view events within the near future.

“We have these big pay-per-view events and have built up these franchises with Revolution, Double or Nothing, now Forbidden Door, All Out coming up, and to end the year we have Full Gear. It’s really cool, the growth we’ve had on pay-per-view, lots of exciting things happening. I saw a quote about it yesterday [Tuesday], a lot of times in wrestling media, I see stuff get reported by media that would not fly in other sports, unconfirmed and unsubstantiated rumors, but they spread like wildfire on Twitter. That’s bad enough, but I actually saw one from inside the company that I was kind of surprised by because it’s not something we’ve ever really said or business planned or anything. I saw a report that we were talking about doing two-day pay-per-views, and I was like, ‘who said that?’ I looked and it was Dustin! I was like, ‘Why would Dustin say that.’ I love Dustin so much and I was surprised that he said it because it’s not something we seriously internally discussed. At most, at times, I like looking at other business models, at most I’ve said, ‘that’s an interesting business model,’ but far from saying, ‘That’s how I’m taking our stuff’ or ‘that’s what I’m going to do.’ I’m definitely not doing that. Even if I was, and I’m not, I probably wouldn’t want somebody to break that news at a panel. I can honestly say, that’s not what we’re doing anyway. I was surprised by that. For the long-term, foreseeable future, I still see the pay-per-views being the great on-day events we’ve been doing. A lot of people were like, ‘How is that going to work, what is that about?’ Well, it’s not going to work, it’s not about anything. It’s not true.”

The basis of the rumor originated from a recent Q&A panel at Terrificon that featured Dustin Rhodes as the guest. During the panel, Rhodes hinted that AEW was currently working on plans for future two-night PPV events. Rhodes stated:

“I think we’re going to go to two-day events now, for pay-per-views. I believe. I’ve heard that down the pike. It’ll be like a WrestleMania experience, you have two days of Double or Nothing or two-days of All Out or Revolution.”

AEW talent Ari Daivari, formerly known as Ariya Daivari, reportedly is currently working in a backstage role in the company, according to Fightful Select.

It was reported that their sources stated that besides working as an in-ring talent, Daivari recently also started working in a backstage producer role for the company. It was also reported that Daivari helped produced the highly received Jamie Hayter & Dr. Britt Baker vs. Thunder Storm (Thunder Rosa & Toni Storm) match on the August 3rd AEW Dynamite show. Those spoken to stated that Daivari laid out the foundation for the match while the wrestlers themselves largely put things together.

Prior to his signing with AEW, Daivari had worked as a backstage producer for WWE on a tryout basis.