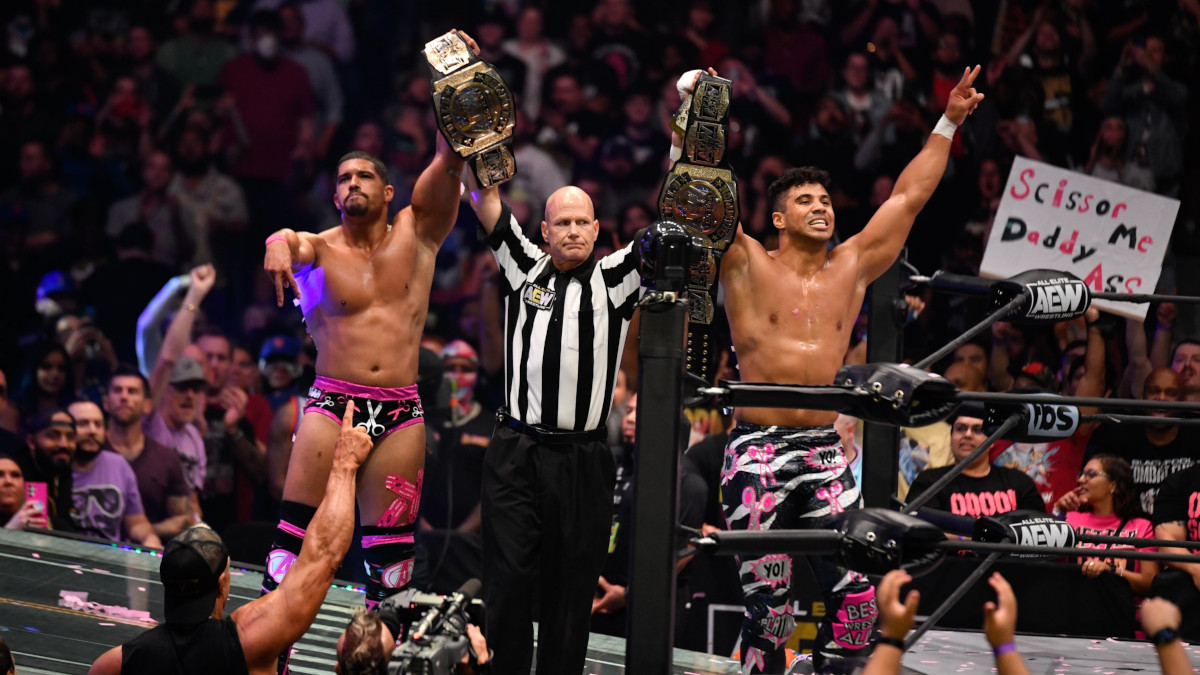 A recent episode of the Busted Open Radio podcast had AEW CEO Tony Khan as the guest. One of the topics discussed included Khan’s thoughts on him being very proud of The Acclaimed after their AEW World Tag Team Championship victory at AEW’s Dynamite Grand Slam 2022 show last week.

“Absolutely [it was a great Dynamite Grand Slam] and new World Tag Team Champions The Acclaimed.

I was so proud when The Acclaimed won. I was so happy. Keith [Lee] and Swerve [Strickland] have been great, great tag team champions. Swerve In Our Glory, two of the biggest free agent signings we’ve ever had in AEW. But, The Acclaimed winning last week in New York City was such a great moment.

It was amazing and I felt like the crowd at All Out in Chicago really wanted The Acclaimed to win and they were totally behind The Acclaimed, they had this great support and I think the momentum carried over for about 17 days from All Out to Grand Slam and it led to this amazing moment with The Acclaimed winning, hometown heroes on worldwide TV, over a million people watching it live and a record audience watching in person there in New York. It was just one of the best moments we’ve ever had in AEW.”

During a recent episode of the Undisputed Podcast, host Bobby Fish stated that the recent rumors of him trying to persuade Adam Cole and Kyle O’Reilly to leave with him from AEW for WWE are not true.

“Because guess what boys? After over 25 years or something like that in the wrestling business, I don’t know how contracts work myself [Fish laughed]. I guess what was most troublesome and amusing at the same time to me was how many outlets picked up on what was — because if there’s anybody who knows that it’s totally fabricated information then it would be me, Adam [Cole], Kyle [O’Reilly], Hunter, the people that it’s talking about who didn’t do any of the things, so none of it’s real and even people like Jim Cornette picked it up and commented on it and Jim and I have always had a great relationship. If I’m being honest, Jim hurt my feelings a little bit by believing some bullsh*t about me so easily. But yeah, it is what it is and I think that that’s what sucks most about it is that these people who write this stuff, there’s no checks and balances, there’s no ramifications when you are in the wrong. Therefore, they continue to just write whatever it is that they’re gonna write and it gets picked up by whomever and then it becomes — the fact or fiction line really doesn’t matter so, the whole thing is just absurd.”

AEW recently announced that they will be holding a new set of AEW Dynamite and Rampage shows on November 30th at the Indianapolis Farmers Coliseum in Indianapolis, Indiana. It was also announced that tickets for this upcoming shows will officially go on sale starting on October 7th.

A GoFundMe fundraiser was recently launched for the family of AEW audio technician Dennis Bowe due to the loss of his home in Florida from the effects of Hurricane Ian. It was stated that Bowe’s house had caught on fire twice from a power surge during the storm and was destroyed as a result. Bowe was away on the road for AEW at the time and returned to discover that his home was gone.

Dwayne “The Rock” Johnson recently announced that he will be visiting the city of Toronto on October 13th for a special screening of his upcoming new Black Adam film at the Cineplex’s The Rec Room. In an interesting note, PWInsider’s Steven Fernandes reported that Johnson’s upcoming visit takes place on the same night as AEW’s Dynamite show at The Coca-Cola Coliseum in the city and the distance between both venues is only 1.5 miles apart from each other.