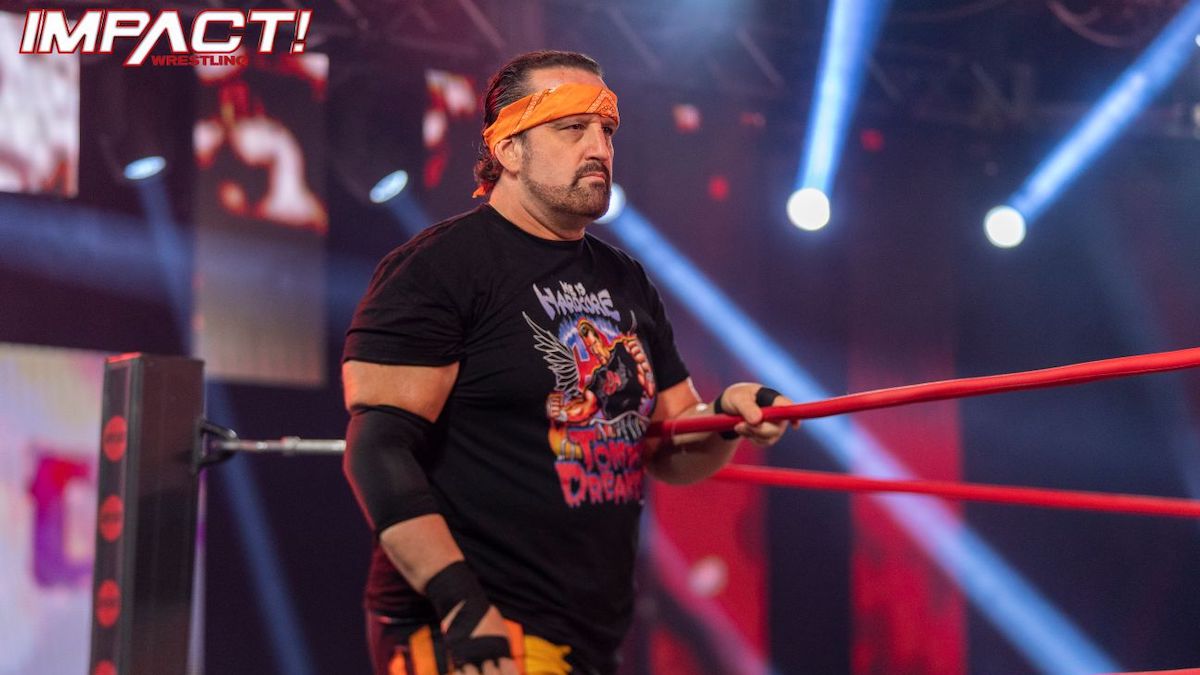 Lucha Libre Online held a recent interview with Tommy Dreamer. One of the topics discussed included his thoughts on this year being the thirty-third anniversary of his wrestling career debut.

“My life is blessed. Actually today, when we’re filming this interview, October 28, is my thirty-third year of my first-ever match. If anybody could give words of inspiration, you’re looking at somebody, I just wanted to have one match. Then one match turned to two, and [I’ve] had a 33-year career. I’m very, very blessed to still be wrestling.”

Dreamer also gave his thoughts about his career in Impact Wrestling.

“For me, very, very blessed. I’ve been with IMPACT for a long time now, working behind the scenes, on-camera, off-camera, just still living my dream, and I’m very, very blessed to keep doing it. I’m trying to have the career that Carlos Colon had, where [I’m] constantly wrestling and still keep on doing it.”

Dreamer also gave his thoughts on his love of being a professional wrestler.

“Like I keep saying, man, this is all I’ve ever wanted to do. Life is hard, as well as if you work hard, you can succeed and follow your dreams, no matter what they are gonna be. Hopefully somebody out there listening has their dream and they’re looking at this heavyset individual and saying wow, if that guy can make it, I can make it too. But I worked my ass off to get here, and I hope you all realize how much I love you. I really do. This has been my dream, and I freaking love the wrestling business, and I love being a part of it still.”

A trademark for “Queen of the Ring” was filed by WWE on October 28th for wrestling and merchandise-related purposes.

A trademark for “TLC: Tables, Ladders & Chairs” was also filed by WWE on November 2nd for merchandise-related purposes.

A trademark for “Rhodes Wrestling Academy” was filed by Dustin Rhodes on October 30th for wrestling and entertainment-related purposes.

Indie wrestler “Dirty” Ron McDonald, real name Michael Gordon, reportedly was arrested this past Wednesday in San Diego, California over charges of false imprisonment with violence and assault with force, according to Fightful. McDonald was notable in wrestling for accusing Game Changer Wrestling this past May of falsifying COVID-19 tests, requiring talent to pay for their own travel and hotel accommodations, and low pay for talent working at their events, which were later refuted by several GCW talents and GCW owner Brett Lauderdale.

Dave Meltzer reported in this week’s Wrestling Observer Newsletter that Pro Wrestling NOAH’s head booker Nosawa Rongai will be retiring after NOAH’s event on February 21, 2023 in Tokyo, Japan. Meltzer reported Rongai had recently informed both Dragon Gate and NOAH officials that he was feeling overburdened having to book for two companies while also being an active wrestler in both companies as well. Kendo Kashin reportedly will be taking over full-time booking duties for NOAH going forward.

Production for the next season of the Dark Side of the Ring series reportedly is currently in production, according to the Wrestling Observer Newsletter. Dave Meltzer reported that besides the new season arriving at some point in 2023, no other details regarding the amount of episodes nor planned airing date is currently known.

Pro Wrestling Guerilla reportedly currently do not have any plans to hold events during WrestleMania 39 weekend next year in Los Angeles, California, according to the Wrestling Observer Newsletter.

Absolute Intense Wrestling announced that they have recently signed a deal with FITE TV to join their FITE+ streaming service.

Mick Foley recently announced on Twitter that he will be donating all of the proceeds generated from his upcoming one man show event on December 4th to Joe Doering to help financially assist his medical costs for his current battle with brain cancer.

Impact Wrestling recently announced two new matches for the card of their Over Drive 2022 event on November 18th in Louisville, Kentucky: