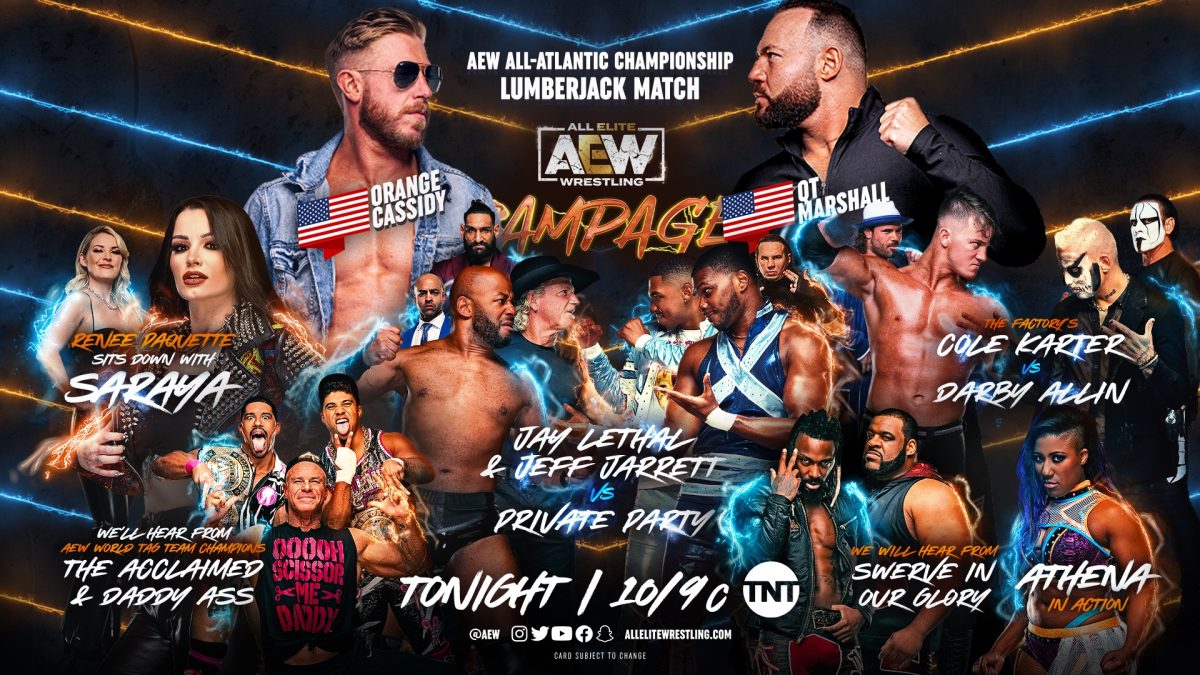 Results by Chris Gerics of Wrestleview.com

Cole showcased a lot more offense in this match, including an Avalanche Falcon Arrow. Darby wins with the Coffin Drop after a Scorpion Death Drop.

Tune in to #AEWRampage on TNT right now! pic.twitter.com/yAvUfCsY5O

Renee backstage with Keith Lee; he is interrupted by former ROH star Shane Taylor! A former partner and one half of the Pretty Boy Killers who challenges Lee to a tag team match at ROH Final Battle after questioning his motives. Swerve shows up next to Keith and smiles as Keith looks annoyed.

We see a recap of “10” Preston Vance turning on The Dark Order last week, with comments from the wrestlers involved.

#TheBunny @AllieWrestling is tired of watching other people get what she deserves and calls out @shidahikaru for the Regina Di Wave Championship! It’s #AEWRampage on TNT! pic.twitter.com/IE4ejOzqaH

The two cut promos on each other. They’ll wrestle next Friday.

Semi-squash match with Lethal & Jarrett picking up the win after a Lethal Injection/Stroke double team. Private Party got minimal offense but did hit the Silly String.

Saraya was interviewed by Renee and talked about how emotional it was for her to return to the ring.

Complete squash match; elbow and Athena twisted her around and dropped her on her knees, then attacked her some more after the match.

“You may be the king of TV now… Kings get dethroned”
Former 3X IWGP United States Champion Juice Robinson is issuing a challenge to @SamoaJoe!#AEWRampage is on TNT! pic.twitter.com/So3ou5xfXe

“I want it to be just to be you and me, Joe.”@DarbyAllin has a message for TNT Champion @SamoaJoe! #AEWRampage is on TNT! pic.twitter.com/CSPZeKjhV7

Darby Allin put out a challenge to Samoa Joe this Wednesday for the TNT Championship.

The lumberjacks included Ethan Page, Best Friends, Varsity Athletes, Private Party and The Factory. Fairly competitive back and forth match, with QT getting a lot of offense and near falls on Cassidy. Matt Hardy refused to hit OC so Ethan Page sent him to the back. QT tried for an apron piledriver but Danhausen then appears and curses QT! Towards the end Kip Sabian distracts OC and Marshall hits a Diamond Cutter for a near fall. OC hits an Orange Punch and Beach Break to win.

Post-match, Kip Sabian attacks Orange Cassidy. House of Black appear and clean house. Brody tries to hit Ortiz with the Dante’s Inferno, but Malakai calls him off for some reason. They hit it on Serpentico and the show goes off the air.