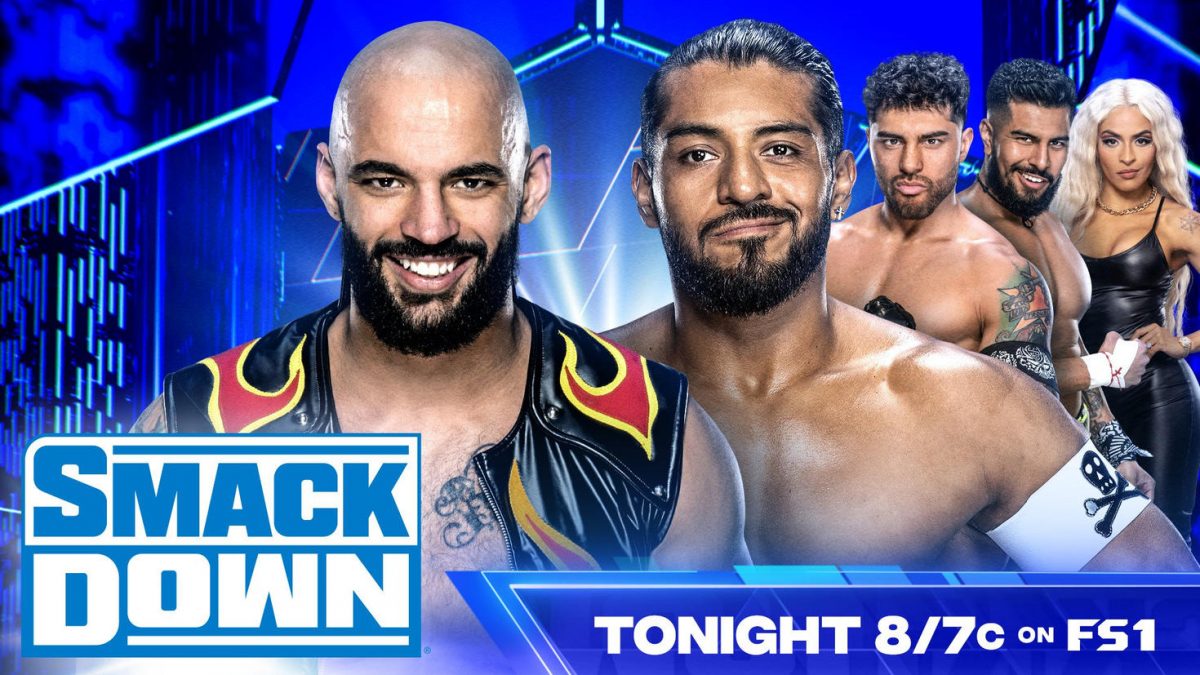 WWE SmackDown kicks off with Sami Zayn’s music hitting as he, the Usos and Solo Sikoa walk down to the ring to a big pop. Jey Uso tells the fans that the Bloodline is in their city. Zayn tells them and at Survivor Series, the Bloodline yet again leveled up because at WarGames they had the longest reigning tag team champions. Jimmy tells him no and that they are not going to do that. He told him in the back, tonight is about Zayn. The Bloodline leveled up but Zayn was the MVP, they were chanting Sami Uso. A loud “Sami Uso” chant from the crowed.

Jey tells Zayn that he doubted him for a long time. He didn’t like him. But when he made the decision of standing with the family, he earned his respect. And it’s because of Zayn that they won at WarGames. Zayn tells him that this is too much, he doesn’t know what to do. Jimmy tells him he has one question and that is how is he feeling. The fans chant “Ucey” as Zayn looks at them and says he is feeling pretty freaking Ucey. Zayn and Jimmy go for their handshake as they look at Jey and tell him to join in. All three guys do their handshake in the ring and hug.

Out come The Brawling Brutes. Sheamus tells Zayn he hates to kick the bollocks off a fellow ginger. It’s enough talking for tonight, it’s fight night. He gets in the ring as the bell rings and we are under way.

A headlock by Zayn as he sends Sheamus to the ropes but Sheamus with a shoulder tackle. Sheamus throws Zayn into the turnbuckle and Zayn bounces off it and falls to the mat. Sheamus grabs Zayn but Zayn with a right hand. He runs to the ropes, Zayn goes for a hip toss but Sheamus blocks it and he hits him with a clothesline. A European uppercut by Sheamus and he throws Zayn to the outside of the ring. Sheamus grabs Zayn and throws him into the barricade.

They air a video package with Santos Escobar talking about how he will win the SmackDown World Cup.

Back from commercial, Megan is with Kofi Kingston. He tells her that he is the first WWE superstar to declare entry into the Royal Rumble match. She asks him about the finals of the SmackDown World Cup. Kofi says he likes what he sees from Santo but he can’t bet against Ricochet.

In come Imperium and they tell Megan why she would ask Kofi about what is going on since he and Woods spend more time on the internet than in the ring. Kofi says Woods isn’t here tonight but he has no problem going in the ring with any one of them. In comes Gunther who says tonight, he will be in the ring with him.

We cut to Bray Wyatt standing backstage in the dark. Wyatt says we are spoiled, society has given us this wild lifestyle. People forget that once upon a time, we were all wild animals. Animals and insects eat each other to survive and that is normal. Wyatt says but we don’t dare to talk about these things even though these primal instincts are in our minds. Wyatt says those ideas are still there but he is not the one that hurt LA Knight. Wyatt says he hurt him and laughs. And how he rejoiced. But if he had been the one, we would all know because there would be none of LA Knight left.

Emma is backstage stretching and in comes Madcap Moss. Who asks her how she is. Emma says she is good but being away for five years is a long time and competition is tough. Madcap tells her it doesn’t matter how long it has been, not to forget who she is. The entire women’s revolution doesn’t happen without her. She worked for the change but the entire world has changed. She is Emma and she belongs here. Emma thanks and kisses him on the cheek as she continues to stretch.

The bell rings and we are under way. A waist lock take down by Shayna. Both women to their feet but an arm bar and a roll up cover by Emma as Shayna kicks out. Emma with a Russian leg sweep. She goes for the cover but Shayna kicks out. Shayna on the ring apron as Emma grabs her but Shayna slams Emma’s arm onto the second rope. An arm bar take down by Shayna in the middle of the ring. Shayna twists Emma’s arm and gets her in an arm bar but Emma rolls her up for the cover and again Shayna kicks out. Shayna with a right hand. She twists Emma’s arm but Emma rolls out of it and kicks Shayna in the face. Emma with a right hand followed by a clothesline.

Shayna grabs Emma’s arm after the match but out comes Shotzi. She gets in the ring and right hands by Shotzi. A kick by Baszler followed by a knee to the face. Shayna steps on Shotzi’s hair and twists Shotzi’s arm. Out comes Raquel Rodriguez and she runs down to the ring with her left arm in a brace. All three women look at Shayna as Shayna gets out of the ring.

We cut to Michael Cole who says in the women’s division, there is also Lavey Evans who is going back to basics.

A video showing Evans running and training with the US Marine Corps.

They air a video of Ricochet talking about the SmackDown World Cup final.

The bell rings and we are under way. Kifo with kicks and a drop kick onto Gunther. A head lock by Kofi but Gunther with a back breaker. An uppercut by Gunther in the middle of the ring. He grabs Kofi but Kofi with right hands and kicks. Gunther grabs Kofi and a chop to the chest. Gunther with a snapmare. He places his legs between Kofi’s head and he twists Kofi’s neck. Gunther pushes Kofi to the ropes but Kofi with right hands. He gets Gunther in the corner but Gunther throws Kofi in the corner and a chop to the chest. Gunther throws Kofi to the ropes but Kofi hangs on to the ropes. Gunther runs towards him but Kofi lowers the top rope. Kofi runs to the ropes and Kaiser trips Kofi up and the referee doesn’t see it. Gunther gets in the ring and a big boot onto Kofi.

Michael Cole states that Gunther was talking to him early this week and told him that he is trying to evolve and that he was trying a new move and that move is the Last Symphony.

The Bloodline are backstage. Zayn says he knows a great place to go eat tonight. Zayn is about to walk away as Jimmy tells him to let Solo go with him since he has made a lot of enemies lately. Solo and Zayn walk away. Jimmy tells Jey it’s crazy how Jey has Zayn. Jimmy asks him if he ever spoke to Zayn about having lied to him when he told him that he didn’t talk to Kevin Owens. Jey says he didn’t but that Roman told him he saw what he needed to saw. And that they won at Survivor Series.

In comes Sheamus who hits them with the Shillelagh. Sheamus tells them good luck in their match on Monday and if they win, he and McIntyre will be waiting for them.

Out come Damage CTRL to the ring. Bayley says they don’t want to be in stupid Buffalo but she is sure that Michael Cole misses her. SmackDown needed ratings and they knew they can count on Damage CTRL. They were inside of WarGames less than a week ago. The three of them combined were in that match for 95 minutes and 19 seconds. She says they don’t know what that does to their bodies because they cheered for Becky Lynch when they won. The fans chant “Becky” but Bayley tells them that Becky isn’t there tonight.

Bayley wants to talk about the SmackDown roster. She says no one wanted to face them. And as the longest reigning SmackDown Women’s champion in history, that disappointed her. They are here to be role models. Out comes Liv Morgan. She tells Bayley it seems like she has a problem with the SmackDown women’s division. Liv counts that there are three of them and says it seems fair as she runs towards the ring. Iyo Sky to the outside but Liv throws her into the barricade. Dakota on the outside of the ring but Liv throws her to the barricade. Liv gets in the ring and spears Bayley. Sky and Dakota attack Liv.

Out comes Tegan Nox and she returns to SmackDown. She attacks Damage CTRL. Liv grabs a kendo stick and hits Damage CTRL with it. Nox hits Bayley with the Shiniest Wizard.

Karrion Kross and Scarlett are in a dark room. Kross says this universe is one giant storm, it’s chaos. And he embraces it. People struggle with that reality. The more they fight it, it really puts them in places they really don’t want to be in and he had to show Drew and teach Madcap that you don’t walk against the wind. And now it is time to take someone else into the eye of the storm. He looks at Scarlett with a deck of cards as she shows a card with Rey Mysterio on it. 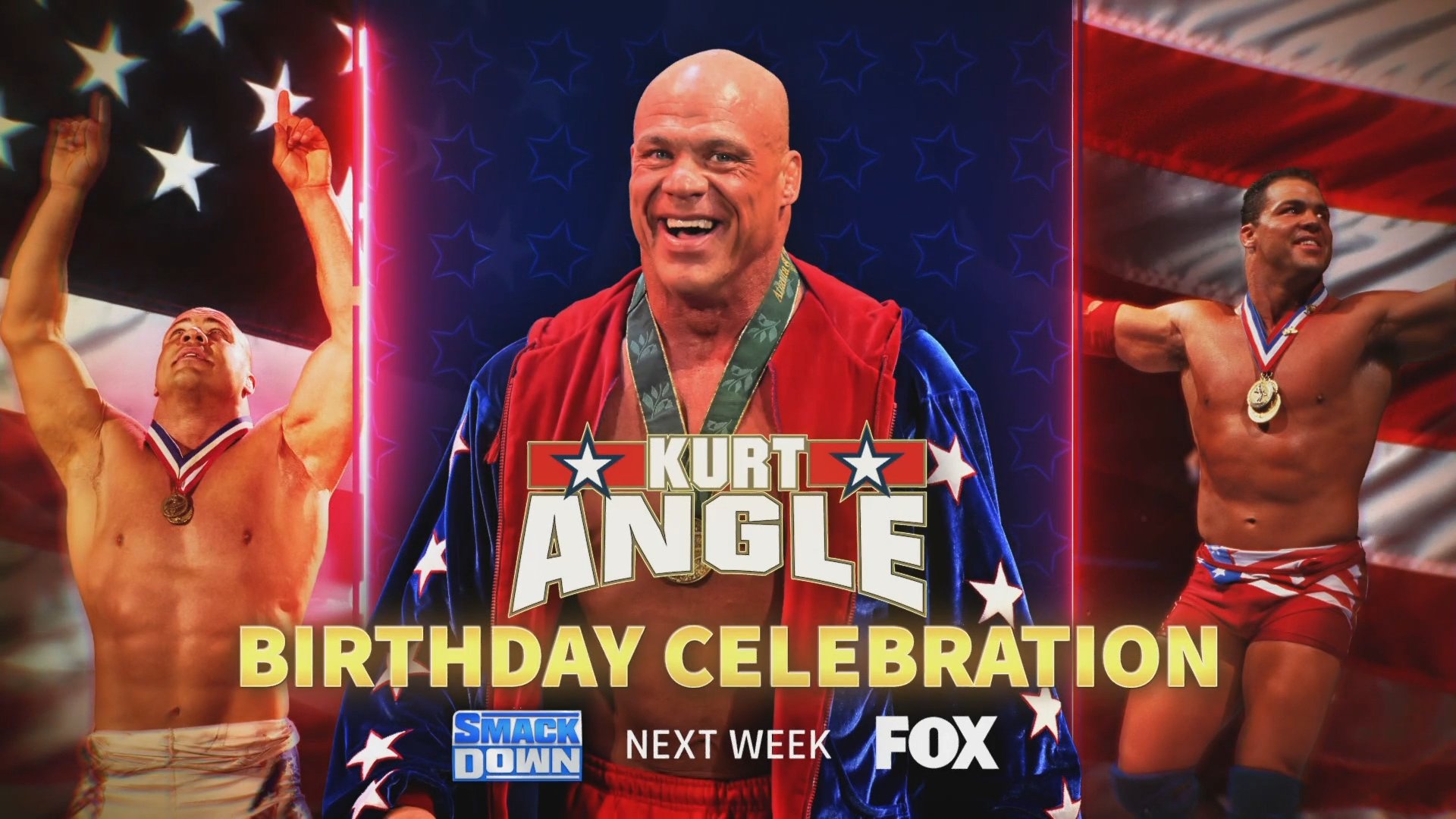 Revel in what you are. #SmackDown pic.twitter.com/jB9SK5VkhI

It cuts to Uncle Howdy who asks how well do you know your neighbor. He says he knows how he thinks and how he feels, it’s all fiction. As he is talking, videos of Bray Wyatt flash across the screen.

The winner becomes the number 1 contender for the WWE Intercontinental Championship.

Zelina Vega is on the commentary team. The bell rings and we are under way. Ricochet with an arm bar but Escobar reverses it into an arm bar of his own. Ricochet acrobatically gets out of it and both men are standing in the ring. Righgt hands by Ricochet. He runs to the ropes but he is distracted by Legado Del Fantasma. Escobar throws him to the outside. Right hands by Escobar as he throws Ricochet back into the ring. A drop kick by Ricochet. He is on the ring apron. The referee is distracted by Joaquin Wilde as Ricochet is pushed off the top rope by Cruz. The referee turns around and he kicks Legado Del Fantasma out of ringside. Zelina gets on the ring apron and the referee kicks her out too.

Back from commercial, a dropkick by Ricochet. He spears Santos in the corner. Ricochet on the ring apron and as he is about to jump off the top rope, Escobar pushes him down to the outside of the ring. Escobar runs to the ropes and a suicide dive onto Ricochet and Ricochet slams into the announce table. Escobar throws Ricochet back into the ring. He goes for the cover but Ricochet kicks out. Escobar with the lion tamer but Ricochet gets out of it. Santos with the Mexican surfboard.