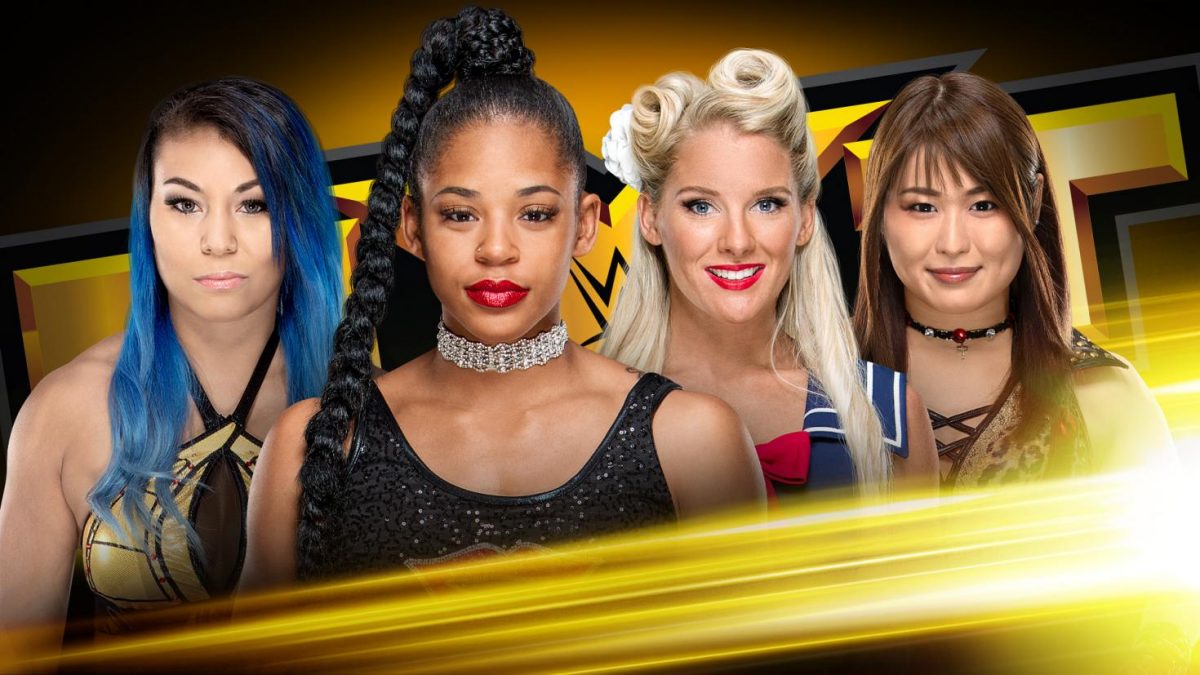 Results by Richard Trionfo of pwinsider.com

Lacey decides to leave the ring and let the other three battle. Mia and Bianca have some words for each other and Io with a rollup on Belair for a near fall. Mia and Io with chops to Belair and then they hit a double back elbow. Mia with a suicide dive to Belair. Lacey hits Io from behind and Io with a suicide dive onto Belair on the Irish whip. Mia and Io discuss strategy against Evans and they hit a double drop kick. MIa with a Yakuza kick to Evans followed by an elbow from Io. MIa with a cannonball to Lacey followed by a running double knee strike. Evans ducks and Mia hits Io with a round kick.

Evans sends Mia to the floor and Io with a rollup for a near fall. Evans with a leg sweep for a near fall. Evans with punches to Io and she gets a near fall that is broken up by Belair. Belair gets Io on her shoulders but Io is pulled off Bianca’s shoulders by Lacey. Lacey and Bianca argue and Evans and Belair go after Yim. Io saves Mia on a double suplex and then Io with a cross body and Evans and Belair catch Io. MIa with a drop kick to knock them down.

Belair and Evans argue and Mia with a belly-to-back suplex on Belair. Evans with a knee to Mia but Io with a springboard drop kick. Belair with a spear to Io and everyone is down. Belair gets a near fall on Io and then on Mia. Belair gets a third near fall on Evans. Belair with a full nelson on Io and Io with a victory roll into a double stomp on Bianca. Io with a drop toe hold followed by a Tiger Feint Kick to Belair. Io goes up top and hits a missile drop kick for a near fall. Evans sends Io to the floor and Mia with chops and kicks to Lacey. Lacey with Women’s Right to Mia and Io breaks up the cover.

Io with a palm strike and she slams Evans. Io goes up top and hits a moonsault but Belair whips Io to break up the cover. Belair sends Io over the top rope onto Mia on the floor. Belair with a Burning Hammer on Evans for the three count.

We are back with a Velveteen Dream video. He says he is 23 years old and he has all this talent. How does Dream do this? Is it easy? Does it come natural to you? There is no secret, there is no formula, it is the Velveteen Dream. This is the same Velveteen Dream who stepped into 2017 and said you would not forget his name. Then we are a year later and there is only one man who stands taller than them all. That is the Velveteen Dream. He is vainglorious. Don’t believe the Dream? Ask Hulk Hogan, Shawn Michaels, Kurt Angle, John Cena, or Triple H. If you thought year one was something, year two will be spectacular.

We take a look back at last week’s steel cage match when Tommaso Ciampa slammed Black’s chances of winning into his face.

Tommaso Ciampa had some comments after the steel cage match. He says he is a man of his word. When he makes a promise, he delivers on said promise. Sometimes, he feels like a broken record. He feels like a man sitting alone in a room talking to the wall. Last week was his vindication. Last week proved that somebody was listening. Somebody has been listening this entire time.

Johnny Gargano listens. Johnny Gargano followed his lead and look at what it led to. Johnny Gargano pinned the man who has an opportunity for the NXT Title at Takeover Phoenix. Where does that leave Johnny Gargano. You cannot have a title match in Phoenix, but Johnny deserves a shot at another title. Maybe Johnny should wrestle for the North American title. This is everything that they talked about. Two kids coming into NXT without contracts. Every car ride touring the entire world. They talked about the day that DIY took over NXT. This is their takeover. Takeover Phoenix ends with Tommaso Ciampa as the NXT Champion and Johnny Gargano as the NXT North American Champion. Two kids taking over the world. Johnny, the possibilities are endless. 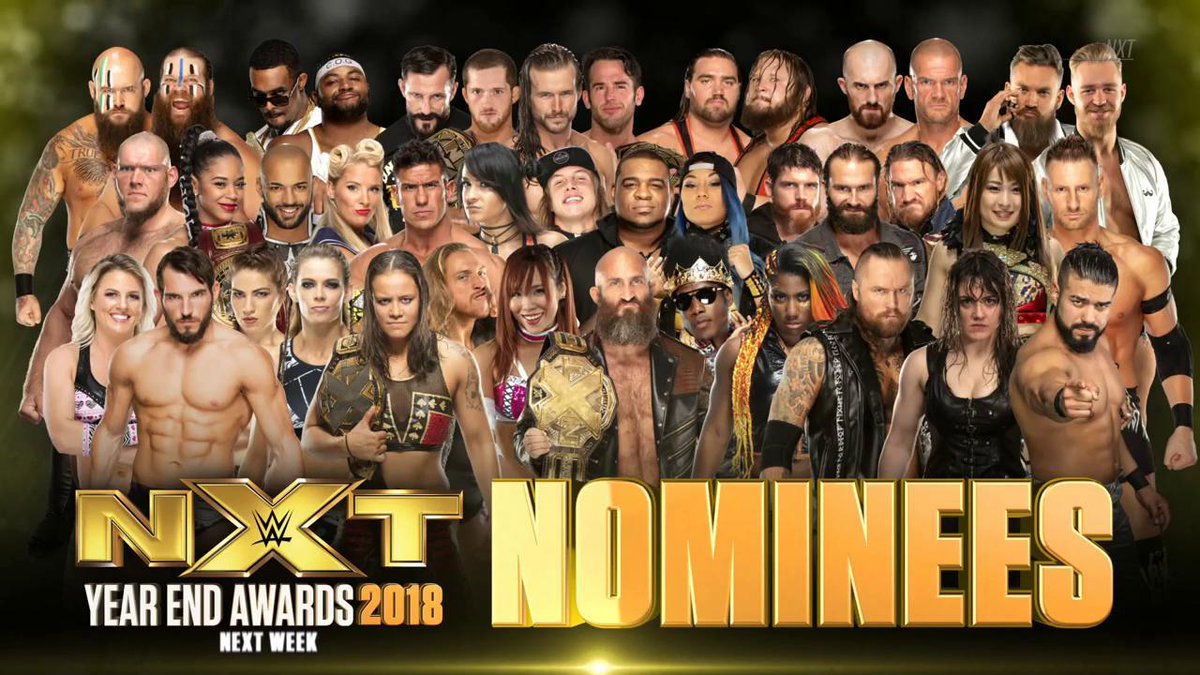 Next week, we will have the NXT Year End Awards. Additionally, Matt Riddle will face Kassius Ohno.

Otis with an Irish whip and Strong floats over but Otis does not charge into the corner and he splashes Strong into the turnbuckles. Dozovic with a slam and he sends Strong into the corner and tags Knight in. Knight with a splash into the corner followed by a shoulder tackle from Dozovic for a near fall. Knight with an arm bar. Strong tries to make the tag and he succeeds. Knight slams Strong and then he gives Kyle a bear hug. Knight and Dozovic send Strong and Kyle into each other and then Knight and Dozovic with belly-to-back suplexes. Kyle goes to the floor and Knight follows.

Knight knocks Strong over on the floor and Knight punches Kyle. Kyle kicks Knight as he returns to the leg. The referee pulls Kyle away from Knight and Strong with a back drop driver onto the apron. Kyle kicks Knight in the back before he punches Knight. Knight with punches to Kyle but Kyle with a kick. Kyle sends Knight back into the ring. Knight punches Kyle but Kyle with a knee to the head. Strong tags in and Kyle kicks Knight while Strong chops him. Strong stands on the back of the leg and connects with forearms. Strong wraps the leg in the ropes and then Strong mocks Otis.

Knight pushes Strong away but Strong kicks Knight. Kyle tags in and Strong is sent over the top rope to the floor. Kyle with a Dragon Screw in the ropes for a near fall. Kyle goes for the leg and tries for an ankkle lock but Knight kicks Kyle away. Kyle with strikes to Knight and then he applies an arm bar submission. Kyle with a knee and Strong with a running forearm. Kyle kicks Knight in the leg and Strong with an Olympic slam for a near fall. Strong with an Indian Death Lock. Knight pulls himself towards his corner but Kyle pulls Strong and Knight into his corner.

Strong goes after Otis on the apron and Knight with a clothesline to Strong but he is down. Otis and Kyle tag in and Otis with clotheslines to Kyle and splashes to Strong. Otis with an exploder to Kyle followed by a splash to both men in the corner. Otis with the worm and elbow drop. Kyle with a boot but Otis catches Kyle. Knight tags in and all four men are in the ring. Otis catapults Strong into a hip toss for a near fall. Strong gets sent to the floor. Knight goes up top and misses a moonsault. Strong tags in and he misses a knee in the corner. Otis tags in and they exchange forearms.