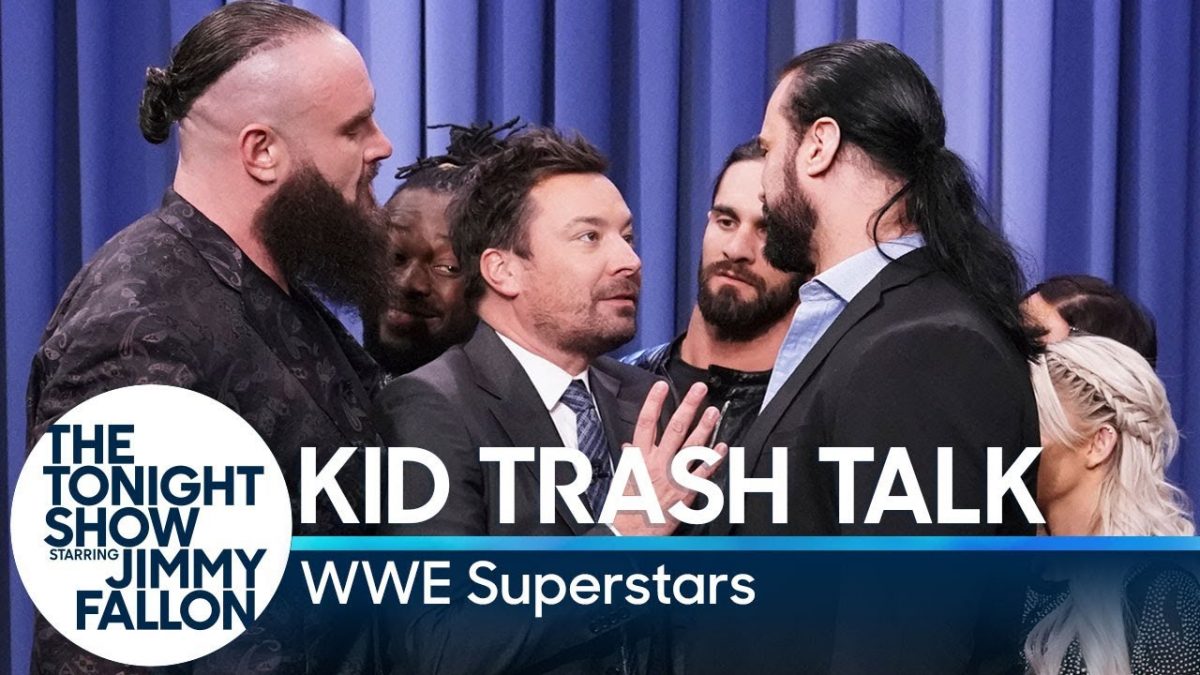 WWE Wrestlers on The Tonight Show

Alexa Bliss, Braun Strowman, Carmella, Drew McIntyre, Kofi Kingston and Seth Rollins were on The Tonight Show last night in a segment called “Kid Trash Talk” where they read trash talk that was written by kids.

MJF on The Rosie O’Donnell Show

A video has surfaced of MJF, who’s signed with AEW, on the Rosie O’Donnell Show as a five year old around the year 2001.

Rosie had him sing “You Are My Sunshine,” and he said that he wanted to be a wrestler when he grew up and that his favorite wrestlers were Goldberg and The Rock. Rosie gave him a WWF t-shirt and lunch at the now defunct WWF New York in Times Square.

Thank you for your time and understanding. Not that you had anything better to do besides read this.

STATEMENT REGARDING THE LEAKED FOOTAGE ON THE ROSIE SHOW

When I said “that’s not me”… I am going to be honest. I lied, which as you all know is VERY unlike me. Matter of fact that was the first time I’ve ever lied. I’m very big on non -lying.

The child in the video was me. I’m not proud of it. My lack of pride in my national television appearance does not come from my excellent (duh) performance, but rather the treatment I received.

Rosie O’Donnell is a hack. She is without doubt responsible for the resurfacing of this clip. I think it’s pretty obvious that she’s attempting to attach herself to my constant rising star as her career continues to dwindle into obscurity. Not only was the video leaked without my consent, but my appearance on the show was traumatizing.

This is difficult to write about, but due to circumstances I feel that I must get this into the public sphere. Okay, here I go…

Upon my arrival to the studio, I was greeted by some of the least attractive “humans” I’ve ever encountered. I literally thought I was at a nuclear test site. These poor excuse for people escorted me backstage to the green room, where they did not have any sparkling water available or lemons to help enhance the dollar store brand bottled water provided (I’m fairly certain these cheap bastards disgustingly filled the bottles from the tap). Finally, after barely being able to get through their pathetic excuse for a cheese platter, I walked on set where I was essentially assaulted by who can only be described as a herpe smelling blond bimbo. She objectified me. She kissed my chiseled masculine mature like cheekbone, and said “so cute”. She then told me that she was an aspiring singer just like me. She attempted to woo me by singing some awful song she performed called “Hit Me Baby One More Time”. I didn’t have the courage at my age to tell her she wouldn’t make it, but needless to say her advances were uncalled for.

I moved past the white trash woman, then felt a burning sensation in my eyes when a massive whale of a woman went to hug me. This was Rosie O’Donnell. Trying to be polite in light of not even being offered my standard fee for hugging a fan, I simply said “no thanks” and walked past her towards her not so lovely love seat. The interview started. While I tend not to pay attention to cretin words, and struggling to understand the language she was speaking ( I don’t speak “poor”), she managed to coerce me into singing. After she got what she wanted, I abruptly left the stage.

While my experience was paralyzing, and I had to shower 5 times that evening to get the commoner stench off of me, it was a good pay day.

Looking back, I take great solace in the fact that at the age of 5 most of you were eating lead based paint chips and probably on welfare. I on the other hand was busy being rich and famous.