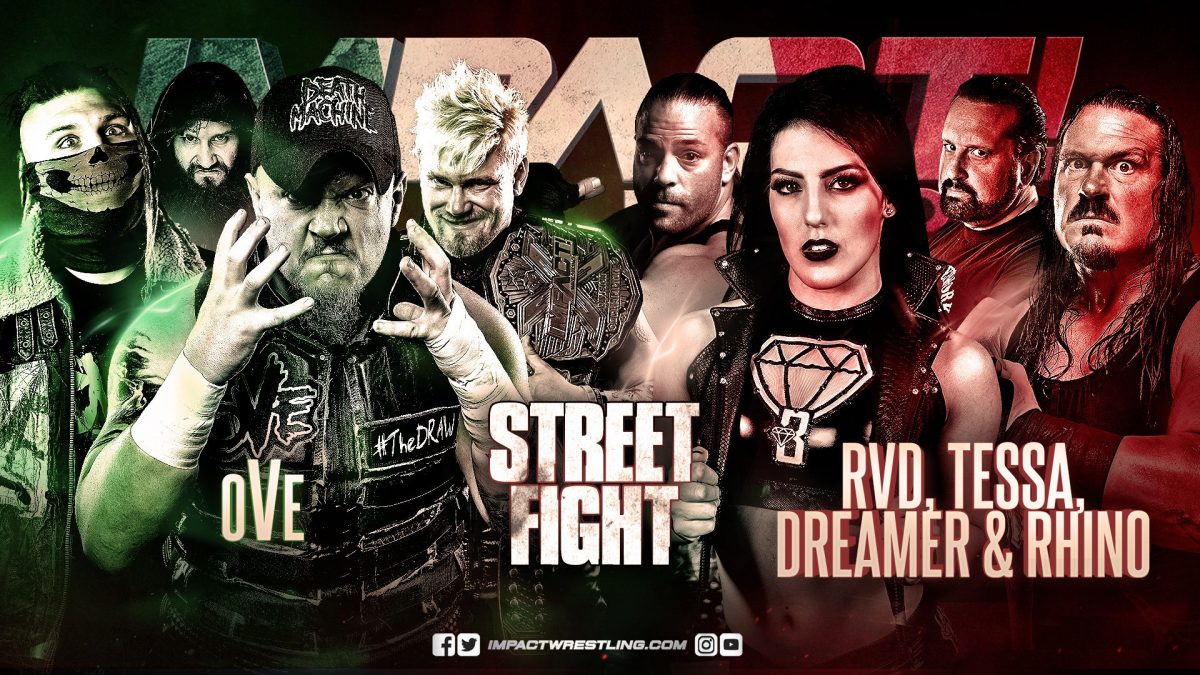 No disqualifications, no countouts and anything goes in this 4 on 4 Street Fight. Tommy hits Fulton with a cutter. Fulton lifts Jake over the top rope to the floor. Tommy launches himself off the top rope, taking out everyone on the outside. Tessa is on fire, taking it to Callihan. Dave cuts her off and hits her with a suplex off the top rope to the floor. Rhino connects with a Spinebuster on Callihan. Tessa takes Fulton off his feet with a big tornado DDT. Fulton holds Tessa high in the air, allowing Jake to connect with a super cutter. Tommy introduces the weapons. Rhino gores Jake through a table in the corner, followed by a Frog Splash from RVD. Tessa locks in a submission on Jake, forcing him to submit.

What a display of courage from @The_Ace_Austin… yeah, right! #IMPACT

Backstage, an injured Ace Austin at the hands of Eddie Edwards ensures Alisha that he’s there to watch her big match against Knockouts Champion Taya Valkyrie tonight.

Ace Austin is brought down to ringside in a wheelchair. Alisha takes control in the early going with a series of running strikes. Alisha hits a Flatliner but Bravo pulls her off the pin. Miraculously, Ace gets up out of the wheelchair and attacks Bravo. Alisha doesn’t see any of it and he quickly sits back down in the wheelchair before she notices. Taya capitalizes off the distraction with Road to Valhalla to win.

Backstage, The North are recruiting people to celebrate LAX’s final match tonight. They encounter RVD & Rhino. RVD is down to party but Rhino isn’t in the mood. Rhino steals their pinata and rips it in half.

Shera dominates with his strength advantage in the early going. Cody dives through the ropes, taking out Rohit and Raj on the floor. Cody jumps off the top but Shera catches him in mid-air and connects with a vicious Chokeslam. Shera hits a modified Powerslam to win.

Lucha Rules means the competitors do not have to tag in and out of the match, it’s a free for all. The Rascalz jumpstart the match with triple Moonsaults to gain the early advantage. Toxin hits Dez with a backbreaker. Wentz connects with a springboard corkscrew press on Toxin. The Rascalz catch Ares on the floor but get taken out by Australian Suicide with a Shooting Star off the top. Dez hits a top rope double foot stomp on Toxin. Australian Suicide attempts another Shooting Star but he hits his own partner by accident. Dez flips Wentz on top of Australian Suicide to win.

"I'm the world's most dangerous man! Ken, do you see that?!" @TheMooseNation is on a mission in Mexico City! #IMPACT @ShamrockKen pic.twitter.com/XGet3fstjX

Moose takes to the streets of Mexico City and beats up on strangers to prove he’s the world’s most dangerous man.

She came to #IMPACT Wrestling to face some of the best talent in the world… and take @TheTayaValkyrie's Knockouts Title!

Jimmy Jacobs sits down with IMPACT newcomer Tenille Dashwood. She says the reason she came to IMPACT is because it has some of greatest female talent in the world. Tenille makes her ultimate goal very clear – she’s coming after Taya Valkyrie and the Knockouts Championship.

No Disqualifications
Havok vs. Su Yung

Havok brings a staple gun with her to the ring. The bell rings and there’s no time wasted when it comes to violence. Su attempts to go Old School on the barricade but takes too long, allowing Havok to drop her on the steel barricade. Havok is draped over the ropes, Su takes advantage with a Pedigree. Su staples Havok between the legs with the staple gun. Su cannonballs off the apron, crashing into Havok on the floor. Su puts on the bloody glove but Havok fights her off with a series of kicks. Havok connects with the Tombstone Piledriver to win.

After the match, Su immediately gets to her feet goes on the attack. They fight through the curtain to the backstage area. Havok finds a rope and proceeds to hang Su from a staircase.

We’re at Melissa Santos’ bachelorette party in Las Vegas. Longest reigning Knockouts Champion Taya Valkyrie makes a toast not to Melissa but to herself. There’s a knock at the door and it’s the police. But this is no ordinary cop – it’s the stripper for the evening, Joey Ryan.

Meanwhile, Brian Cage’s bachelor party isn’t as much of a party. He promised Tommy Dreamer and Rich Swann there would be cheating but it wasn’t what they had in mind. We see Cage cheating on his diet with a plate of donuts. Dreamer and Swann aren’t impressed and leave the party.

This is the final match for LAX in IMPACT Wrestling. Santana hits Willie with a running dropkick. LAX connects with a unique double team sequence on Swann. Willie holds Santana while Swann jumps off the top and hits him with a modified swinging neckbreaker. Swann hits Ortiz with a rolling DDT and attempts a handspring cutter on Santana but Santana counters into a powerbomb. Santana hits another powerbomb on Swann, this time onto the knees on Ortiz. Willie connects with the Six Star Frog Splash on Santana. Swann and Willie hit Santana with a 450 Splash and Six Star Frog Splash respectively to pick up the win.

After the match, the locker room empties to thank LAX and say goodbye.

Su Yung is in an emergency room in Mexico City. Just when it seems like she’s deceased at the hands of Havok, she wakes up. IMPACT Wrestling goes off the air.