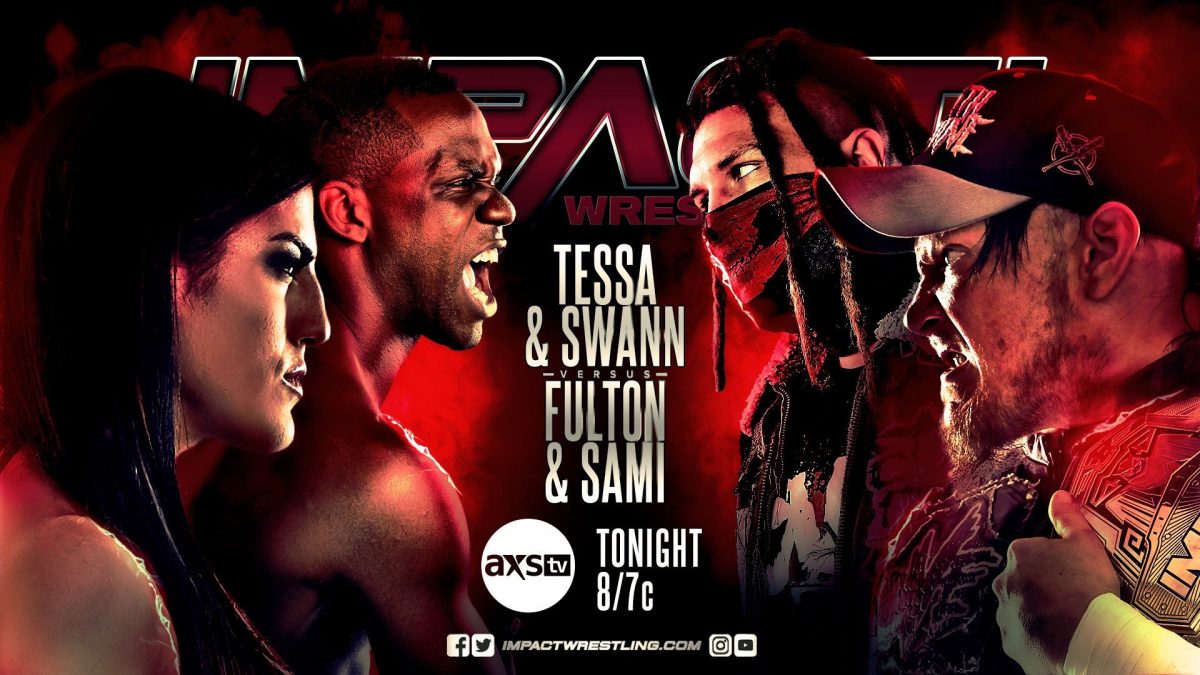 XXX-Division Champion Ace Austin joins Josh Mathews and Don Callis on commentary. Trey hits a springboard flip dive, crashing into his opponents on the floor. Petey hits Trey with a Hurricanrana on the outside. Prince connects with a 450 on both Trey and Banks. Willie is next to fly with a Six Star Frog Splash on Prince but Rohit breaks up the pin attempt with a double foot stomp. Trey rolls up Petey to score the pinfall and become the next challenger for Ace Austin’s X-Division Title. After the match, Trey is congratulated at ringside by his mother.

"I'm going to do what exactly what people thought I could never do, and that is become IMPACT World Champion." @GottaGetSwann is coming for @TheSamiCallihan's title. #IMPACTonAXSTV pic.twitter.com/PKFIBcR7hz

Gabby Loren interviews Rich Swann and Michael Elgin ahead of next week’s Elimination Challenge match to crown a new no.1 contender for Sami Callihan’s World Title.

Nobody is going to stop @MichaelElgin25 from becoming the number one contender next week. #IMPACTonAXSTV pic.twitter.com/R37fXxW28x

Madison jumps off the second rope and hits a neckbreaker. Madison distracts the referee, allowing Kiera to give her a shot from ringside. Alexia hits an Electric Chair for a two count. Madison connects with an Enzuigiri, followed by the CrossRayne to win.

Johnny Swinger leaves a special gift in someone’s suitcase – but it turns out to be Ken Shamrock’s!

When you're the Whole F'N Show like @TherealRVD, you have a lot of important responsibilities.

That is abundantly clear in his latest update from vacation… #IMPACTonAXSTV @TheKatieForbes pic.twitter.com/IMxEXIko4g

RVD and Katie Forbes are enjoying themselves with some champagne in the hot tub. RVD reveals that he returns to IMPACT next week.

Daga hits a tornado DDT to build momentum. Jake catches Daga in mid-air and connects with a Death Valley Driver. Daga takes Jake off the top with a Hurricanrana, followed by the Butterfly Piledriver to win.

.@OfficialEGO and @Walking_Weapon will be doing their talking in the ring in our main event. #IMPACTonAXSTV pic.twitter.com/56NQJX5EGd

Gabby Loren catches up with The North ahead of their Tag Team Championship defense against Eddie Edwards and Marufuji tonight.

Tessa and Swann jumpstart the match with a flurry of offense. Callihan turns it around with a Brainbuster to Tessa. Swann dropkicks Fulton off the apron, then picks Callihan off the top. oVe connect with a modified double suplex on Swann to regain control. Fulton hits Swann with a Thunderous Chokeslam. Fulton distracts the referee, allowing Callihan to hit Swann over the head with the World Title. Callihan scores the pin to win.

After the match, Callihan and Fulton continue the beat-down of Swann and Tessa until Brian Cage makes the save. On his way back through the curtain, Gabby Loren interviews him before he competes in next week’s Elimination Challenge match.

Jordynne Grace confronts Knockouts Champion Taya Valkyrie and challengers her for the title. Taya refuses but John E Bravo steps up to the challenge.

Moose is at the tennis courts, praising himself for being the best multi-sport athlete in the world. He dominates professional tennis player Mikey in a match.

Crystal jumps off the top but Havok catches her in mid-air. Havok makes quick work of Crystal with a vicious Chokeslam, followed by the Tombstone Piledriver to win.

Marufuji hits The North with his signature kicks on the outside. The North wear down Eddie, cutting off the ring and preventing him from tagging in Marufuji. Eddie takes Page off the top with a Hurricanrana, followed by a series of strikes from him and Marufuji. Eddie hits Alexander with the Blue Thunder Bomb for a two count. Eddie hits another power move on Alexander, this time a Tiger Bomb for yet another near fall. The North hit a flurry of double team offense on Eddie to win the match and retain their titles.