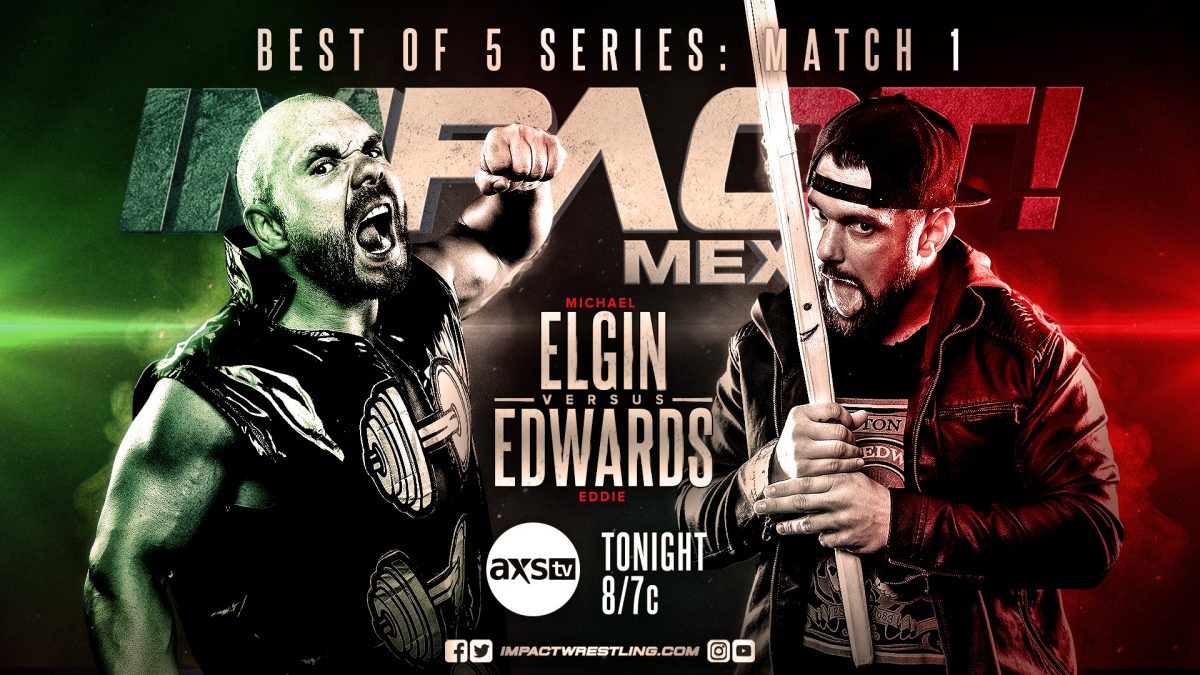 Vikingo sends Alexander to the outside with a twisting Hurricanrana. Vikingo misses a dive but rolls through. Alexander catches Vikingo off guard with a huge clothesline. Vikingo hits a springboard dropkick, followed by a dive over the top rope to the floor. Vikingo brings the fight to the fans as he jumps into the crowd and back into Alexander outside the ring. Page trips up Vikingo on the outside. Vikingo takes him out with a springboard dive. Alexander attempts a Tiger Bomb but Alexander reverses into a pin and scores the upset victory.

Backstage, Taya Valkyrie berates Gabby Loren for asking her about Jordynne Grace and her involvement in the #1 Contenders Match later tonight

.@TheMooseNation says the only reason he lost to Taurus last week was because of @Rhyno313.

He plans to prove that TONIGHT. #IMPACTonAXSTV pic.twitter.com/j03Buy0ceA

Pagano delivers a series of chops to Dez. Pagano flies, crashing into the Rascalz and his own partner on the outside. Murder Clown and Pagano take out Wentz with a big Tower of Doom. Murder Clown hits a 619 and heads to the top. The Rascalz take him off the top rope with a double Superplex. The Rascalz hit Murder Clown with a Swanton, followed by a corkscrew to win.

Michael Elgin previews his Best of Five Series with Eddie Edwards. Elgin claims that he will get the clean sweep.

Taurus gains the early advantage in this battle of beasts with a corkscrew dive to the floor. Moose turns it around by sending Taurus head first into the steel ring post. Both animals exchange headbutts in the middle of the ring. Moose sends Taurus crashing into the post, followed by the No Jackhammer Needed Spear to win.

After the match, Rhino sneaks into the ring and hits Moose with a vicious Gore.

Eddie Edwards speaks on his Best of Five Series with Michael Elgin which kicks off with match one later tonight.

.@TheEddieEdwards is sick of all of @MichaelElgin25's talk. He's happy to put up a scoreboard. #IMPACTonAXSTV pic.twitter.com/Ek0jpJZ3Yk

"I think @TherealRVD might be a little threatened because @TheKatieForbes want's to touch 𝘪𝘵." @JoeyRyanOnline doesn't believe that RVD thinks he's too extreme. #IMPACTonAXSTV pic.twitter.com/F06Kih6G6W

Jordynne hits a hanging DDT on Kiera, then slams Madison on top of her with a leg scissors. Madison and Kiera double team Jordynne but can’t agree on who goes for the pin. Jordynne fights back with a series of strikes but the Frenemies regain control by tossing Jordynne off the top rope to the mat. Both of them go for the pin but the referee reiterates that only one person can do so. Jordynne lays out Madison on the outside, followed by the Grace Driver to Kiera for the win.

X-Division Champion Ace Austin gives us a history lesson on his recent string of victories.

There's been a lot of talk about making history lately – @The_Ace_Austin is here with a history lesson for everybody instead. #IMPACTonAXSTV pic.twitter.com/flM00MFPS9

Johnny Swinger insists that he and Willie Mack work on their teamwork in order to win the Tag Team Championships. Willie Mack has no intentions of teaming with anyone until Rich Swann makes his return from injury.

Fallah reveals the new ring attire that TJP gave to him. Next week, TJP faces Vikingo who defeated Josh Alexander earlier tonight. If he’s victorious, it may put him and Fallah in the Tag Title picture.

.@FALLAH1 and @MegaTJP aren't exactly on the same page about Bahh's new gear.

Daga attempts a springboard but Thornstowe picks his leg and sends him into the steel guardrail. Reno Scum begin to wear down Daga on their side of the ring. Thornstowe takes it a step further but knocking Wagner off the apron with an elbow. Daga connects with a DDT on Luster to create separation, allowing him to tag in Wagner. Thornstowe gets hit with the Wagner Driver for a two count. Reno Scum connect with a double team Spinebuster into a Death Valley Driver on Daga. Daga spikes Thornstowe on his head to win.

Post-match, Madman Fulton, Jake and Dave Crist of oVe attack Daga and Wagner from behind. Reno Scum makes Wagner’s son watch on from ringside in horror.

Rosemary confronts Susie backstage and questions whether or not she has found what she’s been looking for. Rosemary says that perhaps what Susie is seeking is not in the battle arena but in the battle itself. Rosemary proposes that they turn Susie into a warrior with a friendly exhibition match next week. Susie accepts.

Eddie is in control after a dive to the floor. Elgin attempts a German Suplex on the outside but Eddie lands on his feet. Instead, Elgin swings Eddie into the steel guardrail. Eddie hits the Blue Thunder Bomb. Eddie takes Elgin off the top with a Backpack Stunner, then locks in the Half Boston Crab. Elgin fights off the Tiger Driver and drops Eddie on the top of his head. Both men exchange shots, leading to a Tiger Bomb from Eddie. Elgin connects with a top rope Death Valley Driver for a very close near fall. Elgin chokes out Eddie to score the victory.