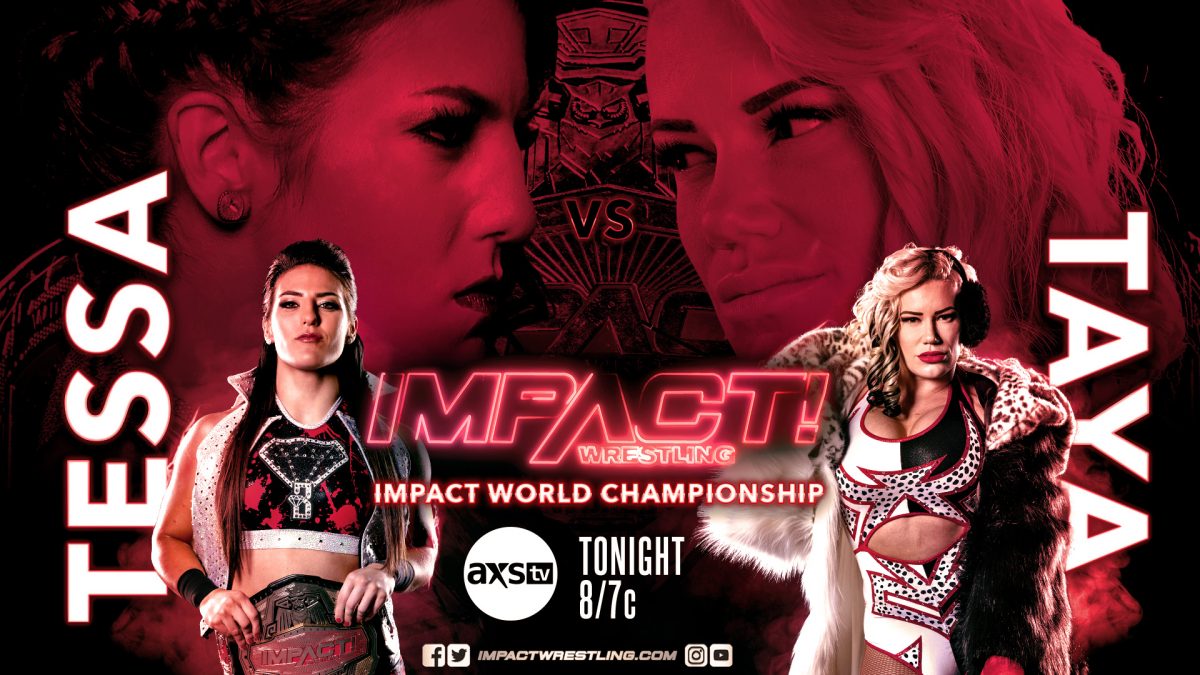 The North vs. TJP & Fallah Bahh

TJP and Fallah hit a backpack splash on Alexander. Page spins TJP into a sitdown powerbomb from Alexander. Fallah goes on the attack with a Samoan Drop to Alexander. Page grabs Alexander, stopping the momentum of Fallah. The North hit TJP with a double team crucifix slam for a near fall. TJP heads to the top but Page takes him down with a superkick. Page connects with a cutter on Fallah. TJP hits Alexander with a sunset flip and scores the pinfall to win.

Gabby Loren interviews World Champion Tessa Blanchard ahead of her historic World Championship Match against Taya Valkyrie tonight. Eddie Edwards interrupts with his Call Your Shot Trophy. He says when he retains the trophy in Match 5 of the Best of 5 Series, the two will face off for the World Title at Rebellion.

Moose takes control with a strong shoulder tackle. Petey attempts to build momentum with his speed advantage but Moose shuts him down with a big boot. Petey connects with a slingshot Hurricanrana to the floor. Moose hangs Petey up on the ropes, sending him to the outside. Petey hits a Flatliner to set up for the Canadian Destroyer. Moose counters and goes Snake Eyes in the corner. Petey rolls up Moose and almost scores the upset. Moose hits the No Jackhammer Needed Spear to win.

Backstage, Madison Rayne is putting the Gut Check Knockouts through her Golden Opportunity Bootcamp. Kiera Hogan interrupts her and questions what she’s doing. A rookie confronts Kiera, standing up for Madison. The rookie is declared the winner of Madison’s Bootcamp.

.@MadisonRayne put the potential next generation of Knockouts through their paces as only she can. #IMPACTonAXSTV pic.twitter.com/R7nf6kvstl

In a bizarre turn of events, Joey does not oil himself up for this bout. Acey hits a big powerslam. Acey falls head first into “it”, doing him some serious damage. Acey connects with a running crossbody to build momentum. Joey attempts Sweet Tooth Music but Acey counters and eats the sucker. Joey has second thoughts about getting Acey to touch it. Acey hits his signature running elbow drop to win.

Glenn Gilbertti and Johnny Swinger claim to Willie Mack that they sold out Sam’s Town Casino tonight. Swinger and Gilbertti challenge Willie to find a partner for a tag team match tonight. Willie says he doesn’t need one.

Joey Ryan, Katie Forbes and RVD continue to form a relationship as they bond over being targets of online criticism.

Su Yung launches herself off the apron, crashing into Havok on the floor. Su attempts to go Old School but Havok catches her and delivers a slam on the steel ramp. Both Knockouts meet head on the middle of the ring with steel chairs. Su places a garbage can over the head of Havok and hits a dropkick. Havok ties Su to the ropes but Su sprays the red mist and breaks free. Su locks in the mandible claw with the bloody glove, then chokes out Havok with the noose to win.

After the match, Su attempts to put Havo in the coffin with the help of the Undead Bridesmaids. Havok fights them off and escapes before Su can shut the lid.

Jimmy Jacobs encounters Rosemary who doesn’t feel satisfied after Su’s victory over Havok and reminisces about her loss of the bunny.

Gilbertti sends Deaner to the outside with a roll-of-quarters loaded punch. Gilbertti distracts the referee, allowing Swinger to do the same to Deaner on the outside. Deaner avoids an elbow drop from Gilbertti and tags in Jake. Both Swinger and Gilbertti are on the receiving end of high speed offense from Jake. Deaner connects with the Deaner DDT on Swinger to win.

There is another broadcast interruption from the ICU.

Have fun trying to get back into your account @MadisonRayne.

Don't worry. You're not my target.

"Always find time for the things that make you feel happy to be alive." – @TenilleDashwood pic.twitter.com/Da7HZM0FbW

Taya hits running double knees in the corner. Tessa sends Taya into the steel guardrail with a dive to the outside. Tessa charges but Taya cuts her off in mid-air, sending her crashing to the floor. Tessa hits a Samoan Drop, followed by a Hurricanrana to build momentum. Taya connects with a powerful spear for a near fall. Tessa powerbombs Taya, then hits a superkick for a near fall of her own. Both women counter each other’s finishers. Tessa hits the ropes and Bravo hooks her leg. Taya charges but Tessa sidesteps, causing her to knock Bravo off the apron. Tessa connects with the Buzzsaw DDT to win.