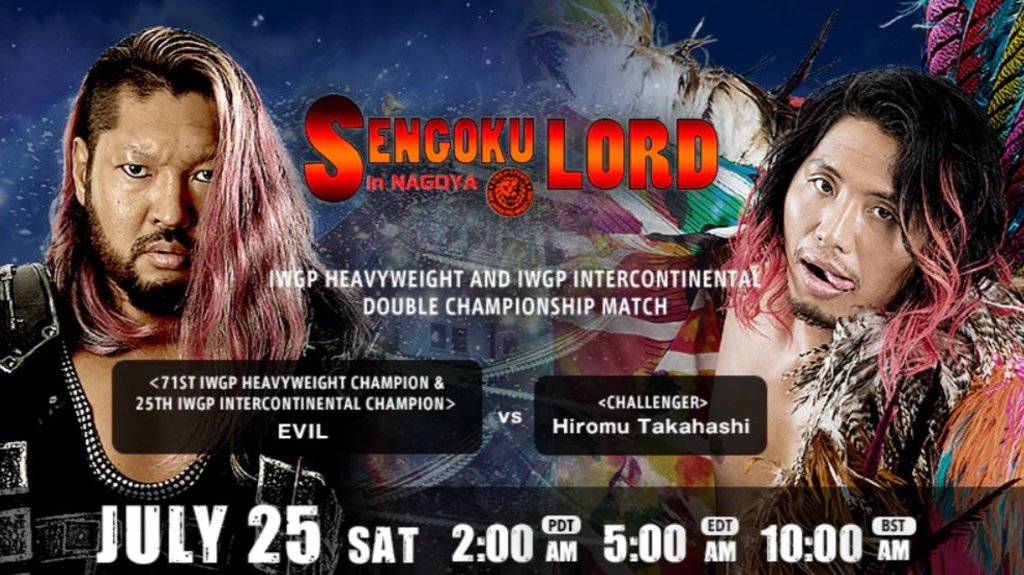 This was a well-worked opener. You can really see the toll that injuries have taken on Ishimori as he is still spectacular in short bursts but has really slowed down overall.

Uemura got the best of the opening mat wrestling sequence. Ishimori turned it into a brawl and whipped Uemura into the barricade. Ishimori worked on the neck.

Uemura made a comeback and used his cool rolling cradle for a near fall. They traded cradles and sunset flips for a series of near falls.

The finish saw Ishimori hit a lungblower. He followed up with a strange sequence on the mat that saw him finally lock on the Yes Lock and Uemura tapped.

This was originally scheduled as an eight-man with Tomoaki Honma on the winning side and Yota Tsuji on the losing team but both were pulled after coming in contact with someone who had COVID-19. Both are said to not be showing any symptoms themselves and were pulled for precautionary reasons.

The match began and ended with Makabe and Kidd. Kidd was fired up and hit Makabe with strikes. Taguchi and Yano tagged in for some comedy spots. Kojima and Ishii had a fun exchange that saw Kojima hit a top rope elbow for a near fall.

Kidd got a series of near falls on Makabe. Makabe cut him off with a lariat and hit a German into a bridge for the pin.

BUSHI and SHO kicked things off. Goto tagged in and worked on BUSHI. LIJ used an illegal triple team to cut Goto off. Naito tagged in for a sequence with Goto. Goto avoided a charge into the corner and hit an ushigoroshi on Naito.

YH tagged in for a surprisingly intense sequence with Naito. They traded forearm shots and Naito sold a lot for YH. Naito hit an enzuigiri and we were back to SHO and BUSHI.

SHO dodged a rewind kick. BUSHI hit a swinging neckbreaker. SANADA tagged in for the closing sequence. Everyone jumped in for a big move. SHO hit a spear for a near fall. SANADA went for Skull End but SHO turned it into a cradle for another near fall.

SANADA then used Skull End and SHO quickly tapped out.

They announced an on August 29 outdoor show, their first in 21 years at Jingu Stadium on the aptly named Summer Struggle tour.

We then had an intermission as they cleaned the ring.

This was a very good match. All action.

Suzuki-gun attacked before the opening bell and the match broke down into a ringside brawl. Suzuki and Nagata renewed their rivalry by trading strikes. Suzuki choked Nagata with a camera cable.

Suzuki-gun cut Wato off and worked him over. Wato came back with a nice dropkick on Taichi before tagging Tanahashi. Tanahashi took on all of Suzuki-gun by himself. He hit a somersault second rope senton on both Taichi and Kanemaru at the same time.

Taichi came back with a gamengiri on Tanahashi. Sabre and Ibushi tagged in for a sequence of strikes and trading cradles for near falls. DOUKI tagged in and got two honest to goodness near fall on Ibushi with a lariat and a driver.

The match broke down. Suzuki and Nagata traded strikes. Nagata hit an exploder on Suzuki. Tenzan hit Sabre with a wheel kick. Wato hit a springboard forearm to DOUKI.

The finish saw DOUKI shove the ref down. He then swung his metal pipe at Ibushi. Ibushi ducked and hit a Kamigoye for the pin.

This was one of the weaker Okada matches you will ever see. Yujiro just isn’t a top flight singles guy. Okada had to sell most of the way to make the match work at all.

Yujiro ducked outside at the opening bell. They brawled in the aisle and around ringside. Okada missed a charge and Yujiro hit a drop toehold to send him into the barricade. Back inside, Yujiro hit some punches from the mount.

Okada came back with a shotgun dropkick and a DDT. Okada tried for a cobra clutch but Yujiro bit his hand to force a break. Yujiro hit another one-legged dropkick and used a fisherman’s suplex for a two count.

They traded strikes. Yujiro hit the ropes but ran into a dropkick. Okada then hit a tombstone and locked on the cobra clutch. Yujiro reached the ropes to force a break.

Okada teased another tombstone. Gedo jumped on the apron with a wrench and took the referee. Yujiro used the distraction to hit Okada with his pimp cane. Yujiro hit Miami Shine for a near fall. Okada blocked Pimp Juice but Yujiro hit a big boot for another near fall.

Yujiro avoided a dropkick and hit a lariat for a two count. Yujiro went for a razor’s edge but botched it. They went right back to the same move. Okada slid out and got the cobra clutch again. Yujiro again bit his hand.

Okada went for a Rainmaker. Yujiro ducked and hit a lariat. Okada hit a dropkick and knocked Gedo off the apron.

The finish saw Okada use the cobra again. He gave up the hold and hit a spinning tombstone before going back to the cobra clutch. Yujiro tapped out.

This was a very good match built around Shingo selling his left leg.

Desperado stole Shingo’s title belt on Monday. He refused to hand the belt over to Red Shoes before the match and tried to hit Shingo with it. Shingo ducked the belt shot and teased his own strike with the title before handing it off to the referee and the match finally began.

Desperado went after Shingo’s left leg. He snapped it over the barricade then attacked it with a chair. Shingo’s selling was awesome. Shingo came back with a crazy double dragon screw. Desperado answered with a spinebuster.

Shingo used noshigami but could not follow up with a cover. Desperado rolled outside and grabbed a chair befire deciding to use the title belt as a weapon. They did a countout tease but Shingo made it back in at 18.

Shingo hit a pumping bomber. He then hit Last of the Dragon for the pin.

Shingo limped to the back still selling his leg.

The last seven or eight minutes were very good but they went forever before that. they worked the match at EVIL’s pace instead of Hiromu’s which hurt the match too. Hiromu was fantastic but the whole EVIL run is built on ref bumps and interference and it limits how good the matches can be.

Hiromu hit the ropes but Togo tripped him. EVIL took the referee and Togo hit some stomps on the floor. EVIL placed a chair around Hiromu’s neck and hit it with a second chair. EVIL exposed a buckle and repeatedly sent Hiromu into it. Hiromu sold his neck.

EVIL used a chinlock, then took the ref again. Togo interfered from the floor. EVIL hit a neckbreaker but missed a senton. Hiromu hit a headscissors and knocked Togo off the apron. Hiromu hit a sunset bomb that wiped out both EVIL and Togo. Hiromu whipped Togo into the barricade.

Back inside, Hiromu used a falcon arrow for a near fall. EVIL blocked a Time Bomb attempt and hit a stomp. EVIL teased Darkness Falls on the apron but Hiromu blocked and hit a superkick. Hiromu hit a Dynamite Plunger on the apron.

Hiromu teased a dive off the post but EVIL pulled two young lions in his path. Hiromu then hit a senton off the post onto EVIL and the lions. Hiromu hit another Dynamite Plunger for a two count.

Hiromu blocked a Magic Killer and hit a shotgun dropkick. EVIL answered with a snap suplex into the turnbuckle pad. EVIL hit a top rope superplex. He went for Everything is EVIL but Hiromu blocked.

EVIL hit a German but Hiromu landed on his feet. Hiromu hit a superkick and a German. EVIL used a standing switch and hit five more Germans. Hiromu blocked Everything is EVIL and backed EVIL into the exposed buckle.

Hiromu locked on D. EVIL tried to hit a slingshot out of the triangle but Hiromu sat down in a cradle for a two count. Hiromu hit some strikes and used an inverted suplex for a two count.

EVIL blocked Time Bomb. Hiromu blocked a low blow and hit a lariat for a two count. Togo jumped on the apron and Hiromu knocked him off with a back elbow.

Hiromu hit a running death valley driver into the corner pad. He went for Time Bomb but EVIL blocked. The ref got bumped on a Hiromu charge into the corner.

Togo jumped in and attacked Hiromu. EVIL and Togo hit a Magic Killer. Togo went up top but got crotched on the top rope before falling to the floor. Hiromu blocked Everything is EVIL and hit the move himself at the 30 minute mark.

Hiromu hit a death valley driver into the exposed buckle. He hit Time Bomb but EVIL kicked out. Hiromu hit Time Bomb II but Togo pulled the referee out of the ring before he could count the three.

Togo choked Hiromu with his ligature. EVIL then hit a low blow.

EVIL hit Darkness Falls. He followed up with Everything is EVIL for the pin.

Winner: EVIL via Pinfall to retain the IWGP Heavyweight and IWGP Intercontinental Championship.

Ishimori ran in and attacked Hiromu after the match, so that appears to be the next IWGP Jr. Heavyweight title program.

Naito ran in to make the save for Hiromu. He then faced off with EVIL and cut a promo. He hinted at a challenge in the future but nothing will likely be made official until the cards for the Summer Struggle tour are announced.

EVIL, Ishimori and Togo celebrated in the ring to close the show.