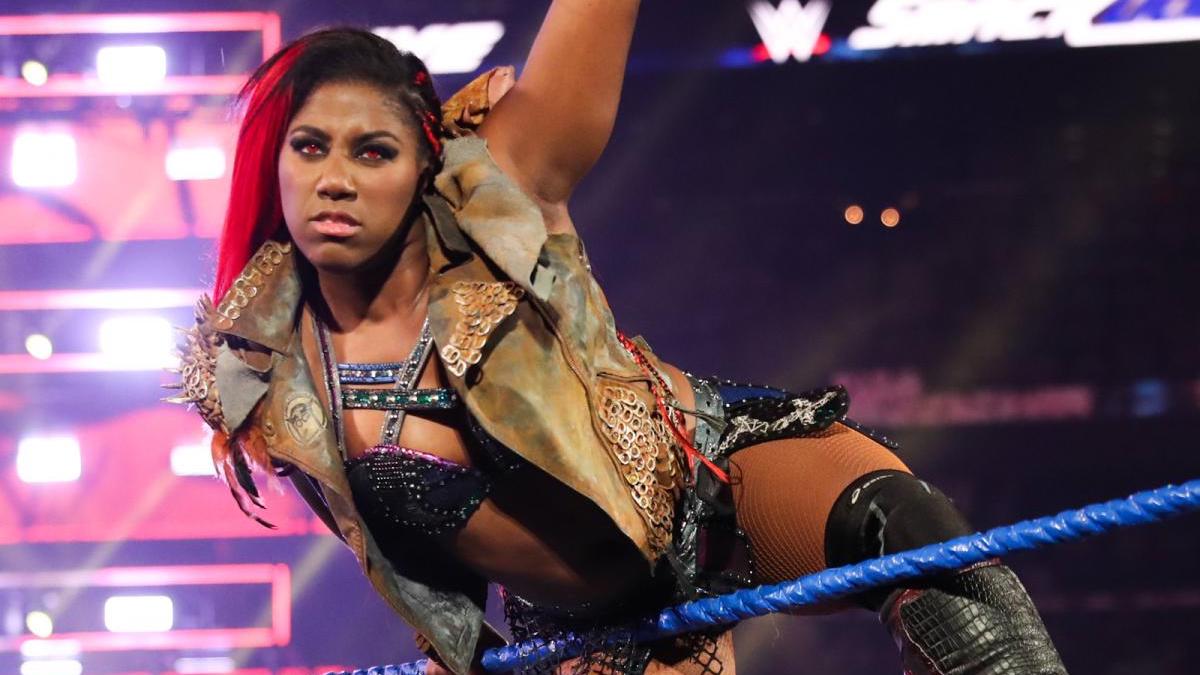 Following this past Monday’s episode of WWE RAW, Ember Moon held a live stream on Twitch discussing her thoughts on the episode. One of the topics discussed included her issues with WWE’s recent booking of Sasha Banks and Bayley in regards to them hogging up all of the main roster Women’s championship titles.

“Why do we need two double champions? Is SummerSlam going to be like low-key Evolution with Sasha and Bayley wrestling for their singles titles and also for the tag titles? Is that a thing? Are we just reliving Triple H [& Steve Austin, Two Man Power Trip] from 2001? Sasha & Bayley have done a great job with a limited roster, but there are too many people sitting at home to tie up all the titles with two people. I was kinda upset — the match was superb — I don’t like the fact that knowing, it was Kairi’s last [appearance], I don’t know if that’s the way you go. I feel you make it more of a threat than just Kairi getting beat up backstage. I think you have Bayley beat-up Kairi and then have her with a forklift about to drop some cinder blocks. [Asuka] had [Sasha] in the Asuka Lock, all she had to do was sit back. It makes more sense if Kairi is in more of a life or death situation versus her getting thrown into stuff and stomped. I get we’re supposed to be angry, and kudos to them for making us angry. No one wanted Asuka to lose, everyone wanted NXT Asuka back and having an undefeated streak. That’s what WWE does. I fell for the ploy of ‘I’m angry because I saw my friend Asuka lose the title in a crappy way.’ Are we gonna have Sasha just lose the title to Lacey Evans or transfer Naomi over? They’re building to SummerSlam, right? As a fan, I feel like I got ripped because once again, I don’t get Bayley vs. Sasha.

I feel like I lost the match I wanted to see two SummerSlams in a row. Maybe they’re waiting for a bigger live audience. Maybe it’s because Charlotte is gone and Becky [Lynch] is on maternity leave. They’re killing me because I really want to see that match. Not only that, but you’re sacrificing all of your other superstars for two people. That’s what it feels like to me. Maybe I misjudge what’s happening. I like to be angry about wrestling. I’m just trying to figure out the next step. Apart of me is like, ‘I don’t know what’s going to happen, ‘which is great, but apart of me is like, ‘I don’t know if that was the right call.’ For me to be so upset that I had to turn off Raw because back-to-back-to-back…that first hour and a half to me was infuriating from a professional and fan standpoint.”

A recent episode of WWE’s The Bump YouTube series featured the first-ever “Bumpy Awards” for the year of 2020 so far. Sixteen awards were given out with Drew McIntyre taking The Bump’s top award of Superstar of the Half-Year.

WWE reportedly will be airing a new episode of their WWE Day Of documentary series on the WWE Network this Sunday, according to WWENetworkNews.com.

It was reported that this upcoming episode will focus on this year’s Extreme Rules pay-per-view event, which was held earlier this month and featured the Swamp Fight cinematic match.