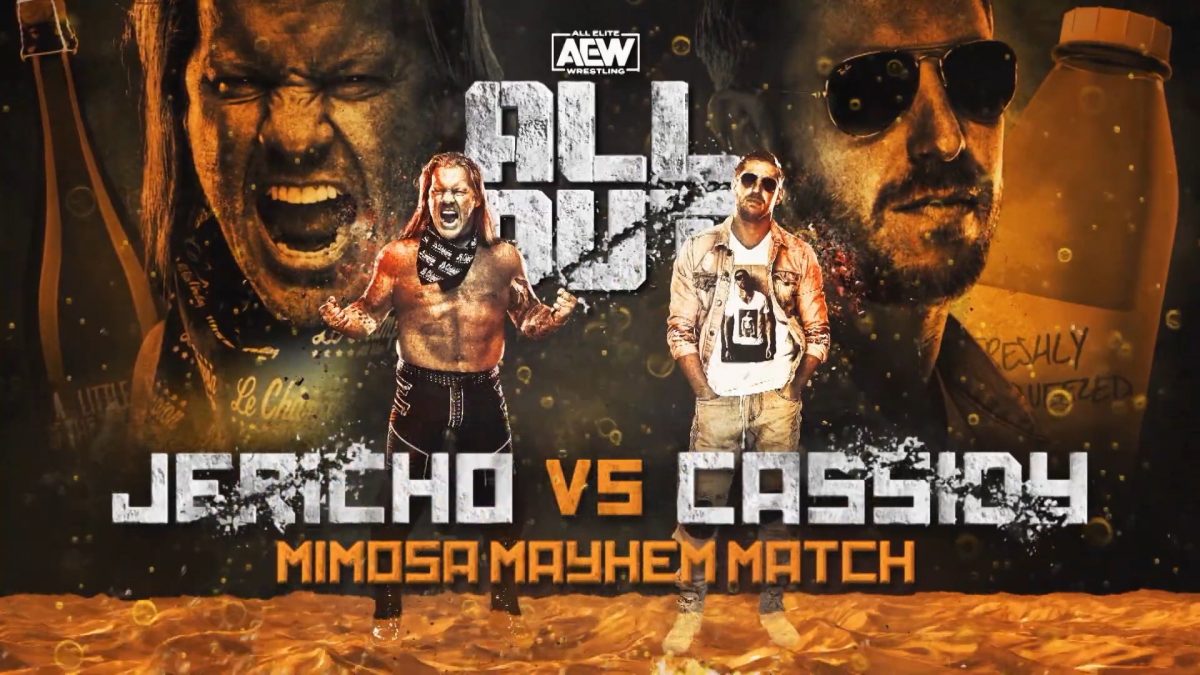 “I got the idea, kind of, coming from one of those of old Atsushi Onita exploding barbed-wire death match sort of things (Jericho worked for FMW early in his career and was on big stadium shows during Onita’s heyday) and, you know, a lot of suspense, kind of like a battle royale, getting thrown out, holding onto the ropes, that sort of a thing. Of course, if someone is able to throw the other, into the pit, the vat, the container of mimosa, then they’re the winner. So of course, it makes perfect sense for the storyline of this feud with Orange Cassidy. Of course, he’s orange juice and I’m a little bit of the bubbly… the champagne. We’re just trying to think of some cool ideas and that just popped into my head and I thought it would be a kind of fun match that can have a lot of twists and turns and false finishes and that sort of thing to it.”

As noted before, WWE filed several notices of opposition earlier this year to the United States Patent and Trademark Office disputing trademarks that had been filed by tag team FTR.

PWInsider’s Steven Fernandes reported that WWE officially filed their opposition on August 26th and included two additional trademarks that were not originally listed by the company.

Fernandes reported that Cash Wheeler and Dax Harwood have until October 5th to officially respond to WWE’s opposition filings.

2K Games recently released a new trailer for their upcoming WWE Battleground game revealing that Jerry “The King” Lawler and Mauro Ranallo will be the in-game commentary team.

This will be Ranallo’s official debut as a commentator in WWE’s 2K gaming series.

Mamma Mia … it’s good to be the King! Ranallo to make his WWE 2K video game debut alongside the Hall of Famer to highlight hard-hitting, over-the-top fantasy matchups in new gameplay-rich trailer

2K today released a new trailer for WWE 2K Battlegrounds, the arcade-style WWE brawler currently scheduled for release on September 18 and available now for pre-order in both digital formats and at participating retailers.

In “Clash of the Eras,” WWE Hall of Fame commentator Jerry “The King” Lawler cheers on the WWE 2K Battlegrounds roster of WWE Legends – such as Undertaker, Mankind, Beth Phoenix and the Bella Twins – as they compete in fantasy matches against several of today’s most popular WWE Superstars, including Roman Reigns, Drew McIntyre, Bayley, Sasha Banks, Finn Bálor and more. While Lawler shows his allegiance, he is joined in the trailer by renowned sports broadcaster and WWE NXT’s Mauro Ranallo, who will make his WWE 2K in-game debut as a member of the WWE 2K Battlegrounds commentary team.

Samoa Joe recently revealed on Twitter that he is the voice actor for King Shark in the upcoming Suicide Squad: Kill the Justice League game for PC, Playstation 5, and Xbox Series X.

Alex Shelley recently stated on Twitter that despite him currently working for Impact Wrestling, he has not signed a new contract with the company and is still a free agent.

Consejo Mundial de Lucha Libre officials reportedly are currently hoping to be able to have a live attendance of around 5,300 for their 87th Anniversary Show on September 25 in Mexico City, Mexico, according to the Wrestling Observer Newsletter.

The Prime Minister of Japan, Shinzo Abe, reportedly will be easing travel restrictions for foreigners who have residency in the country starting next month, according to the Wrestling Observer Newsletter. Dave Meltzer reported that this would allow people like Will Ospreay and Juice Robinson to resume working in country.