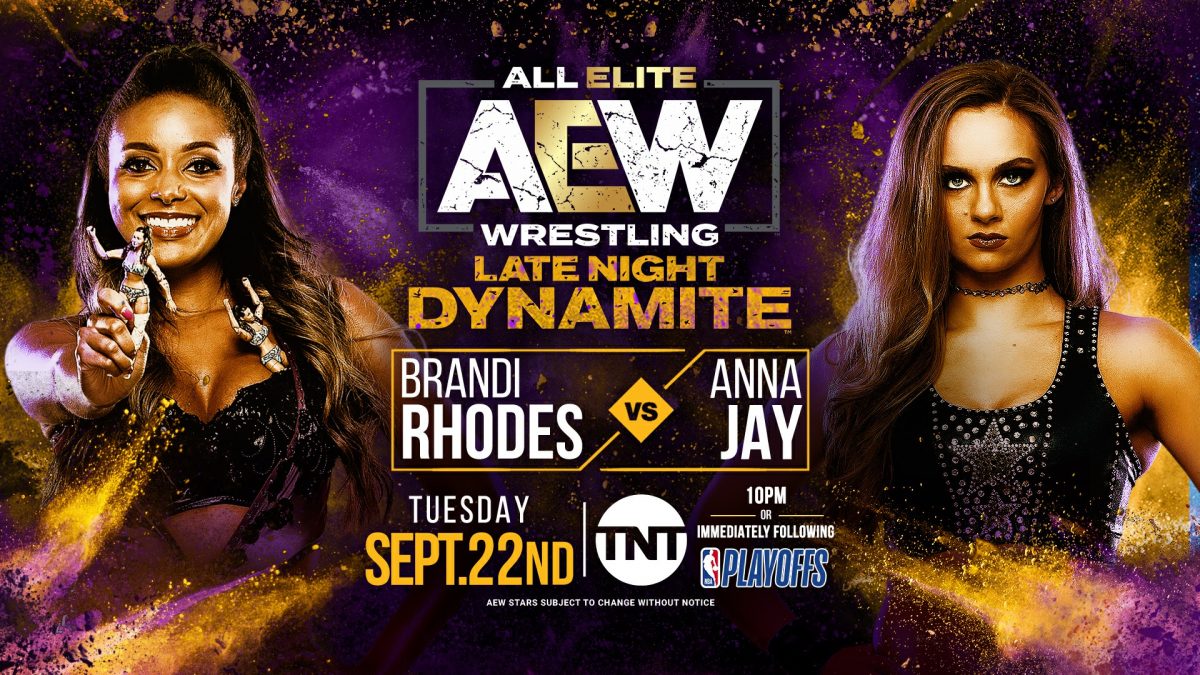 This special edition of “Late Night Dynamite” opens up with Chris Jericho joining the commentary team.

Carter has worked a few times on “AEW Dark” over the last few weeks. This is Sky’s first singles match since his loss to Cody Rhodes last month. Carter and Sky pull off some chain wrestling to start things off and Carter hangs with the much more experienced Scorpio. Carter attempts a Moonsault out of the corner but Sky sidesteps it and hits a Springboard Flying Cross Body for a nearfall. Carter immediately gets back to his feet and catches Sky with an Armdrag and hangs out to an Armbar.

Sky backs Carter into the corner and connects with a series of elbows. Carter backflips away from a charging Sky and then connects with a dropkick sending Sky out to the floor. Sky catches his breath on the floor but then climbs back in and shakes Carter’s hand. Sky and Carter go back to some chain wrestling before things speed back up again.

Sky hits a Punt Kick as Carter went for a backdrop and then Sky connects on a Roundhouse Kick. Sky hits a Russian Leg Sweep for a nearfall followed by a Backbreaker. Sky locks in a Bow and Arrow and then transitions into an Abdominal Stretch. Carter breaks the hold with some left hands and then he escapes a suplex attempt. Carter lights Sky up with chops but then walks right in to a KO punch from Sky.

Sky runs over a charging Carter with a back elbow for another nearfall. Carter rolls to the apron and Sky grabs him to try and Suplex him back into the ring, but Carter blocks it and hits a Leaping Enziguri. Carter then hits a modified Phenomenon (Asai Reverse DDT), right out of AJ Styles’ playbook, followed by a Running Shooting Star Press for a nearfall.

Sky goes to the floor and Carter attempts to hit him with a Triangle Moonsault out of the corner but Sky moves and then levels him with a Mafia Kick. Sky slams Carter into the ring apron and then goes for a Guillotine Leg Drop on the apron but Carter moves. Carter then hits a gorgeous Somersault Plancha to the outside.

Sky attempts a Sharpshooter but Carter kicks him off and then rolls him for a close nearfall. Sky ducks a Spinning Heel Kick and dropkicks Carter’s knee. Sky hits a Ghetto Stomp to the back and follows up with a TKO for the pin.

Sky helps Carter up after the match, hugs him and raises his arm.

A video package highlights the feud between Jon Moxley and Lance Archer.

Anna Jay choked Brandi out back when Brodie Lee beat Cody for the TNT Title. Brandi comes out dolo, while the entire Dark Order comes to the ring with Jay. Brandi immediately goes after Jay with right hands and then a Spear. Jay rolls out to the apron and Brandi follows her with a DDT onto the apron.

Brandi tosses Anna Jay into the barricade before rolling her back into the ring. Brandi hits a Thesz Press and hits a series of sloppy punches. Brandi whips Jay into the corner and starts slapping and kicking her repeatedly. Jay ducks a clothesline and locks in the Queen Slayer (Rear Naked Choke) but Brandi counters into a rollup for a nearfall.

Brandi hits a clothesline for another nearfall and this more sloppy punches. Brandi hits a back elbow but misses a clothesline and Jay hangs her up in the turnbuckles where she puts the boots to her. Jay hits a Snap Suplex and lights her up with chops and kicks in the corner.

Jay chokes Brandi with her boot and then hits a Rolling Neckbreaker for a nearfall. Jay puts Brandi in a Chinlock and then as Brandi tries to fight out she eats an elbow. Brandi comes back with a series of elbows and clotheslines. Brandi hits a Slingblade but Stu Grayson starts to climb in the ring. Evil Uno stops him and Brandi hits the Pump Kick on Jay for a nearfall. The referee was distracted by The Dark Order for a few seconds. Jay hits a Hook Kick and then locks in the Queen Slayer again and this time Brandi passes out.

DYNAMITE EXCLUSIVE@ScorpioSky has made it clear that he’s still coming after that TNT Championship whoever holds it after tomorrow night!

Backstage, Sky puts over Ben Carter and then says he wants another shot at the TNT Title. Matt Sydal walks up and says Sky was impressive and Sky says he will be watching Sydal tonight.

Sydal debuted at All Out and eliminated Spears during the Casino Battle Royal. Spears has spent the majority of the year facing jobbers on “AEW Dark.” Sydal kicks off the match with some nice chain holds and reversals on Spears. Some bad weather knocked out my Dish reception and when it comes back Sydal has Spears in a headlock.

Spears drives Sydal into the turnbuckles and then tosses him to the floor. Spears goes for a dive but Sydal moves and then slams him onto the apron. Sydal tosses Spears back in the ring but Spears catches him with a Baseball Slide. Spears sets up for a dive again but Sydal quickly slides in the ring and catches Spears with a Spinning Heel Kick for a nearfall.

Sydal and Spears exchange chops and forearms until Spears goes for a Brainbuster. Sydal knees Spears in the head and then goes for a Spinning Roundhouse but Spears ducks only for Sydal to catch him with a Leaping Knee. Spears manages to catch Spears with a Brainbuster over his own knee.

Spears goes for the C4 but Sydal blocks it and hits a Jawbreaker and a Roundhouse Kick. Sydal hits a Diving Meteora off the top for a nearfall. Spears rolls out to the floor and sits down in a chair but he’s not safe as Sydal hits him with a Flying Dropkick. Tully loads Spears’ glove up with something as the referee tries to get Sydal back in the ring.

Spears is going to attack Sydal after the match but Scorpio Sky runs out and makes the save.