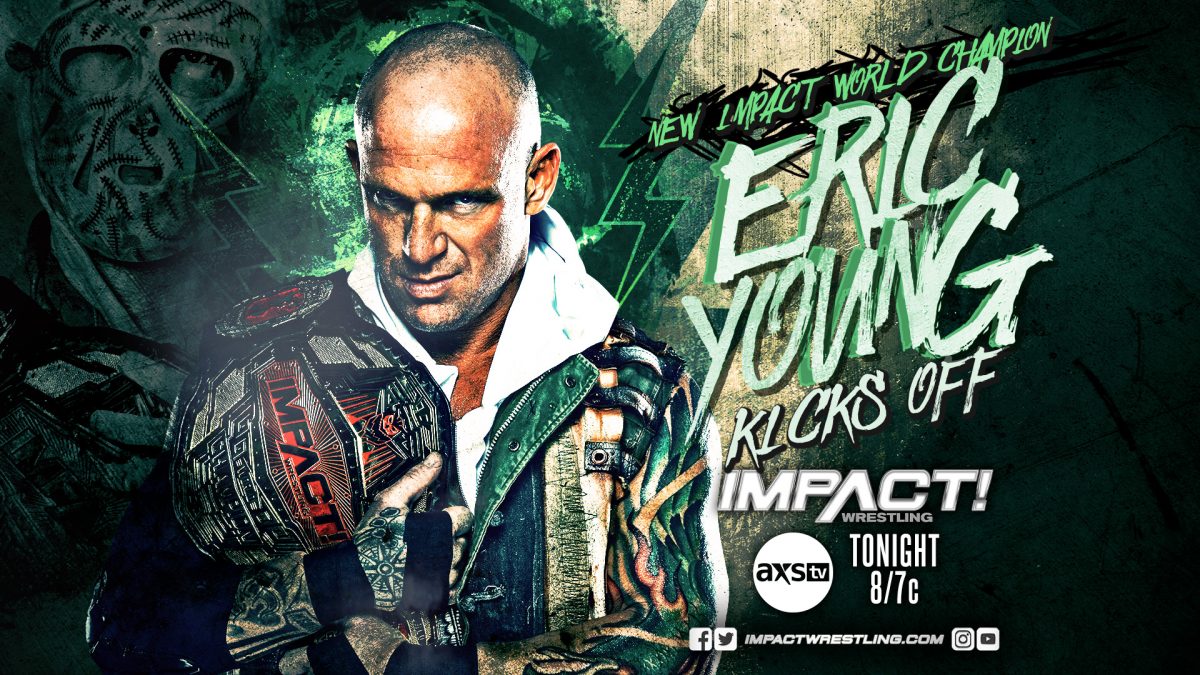 After defeating Eddie Edwards to become the new IMPACT World Champion last week, Eric Young kicks off the show. EY reinstates that his plan to eliminate Rich Swann and Eddie Edwards was by design. Alisha Edwards interrupts and calls him a coward for injuring people, including her husband. Alisha tells EY that she’s been through it all with Eddie and that sooner rather than later, he’ll be back to reclaim his World Title. Alisha tells EY that because of his post-match attack last week, Eddie can’t hold their daughter right now. Being the sick individual that he is, EY looks straight into Alisha’s eyes and tells her that he doesn’t care. Alisha slaps him across the face but that only angers the World Class Maniac. EY is about to piledrive Alisha when Tommy Dreamer makes the save. He gets on the mic and challenges EY to try and end his career tonight. Dreamer announces a match between them for later tonight, and it’s going to be Old School Rules.

Rosemary needs to resurrect Father James Mitchell to officiate the demon wedding between herself and John E Bravo. She leaves Bravo in charge of the planning, but Taya Valkyrie quickly takes control away from him.

The action is fast and furious as TJP charges the ring and goes on the attack. The winner of this match could potentially be next in line for a shot at Rohit Raju’s X-Division Championship. Speaking of the champ, Rohit Raju comes down to ringside and observes the action. TJP hits a handspring arm-drag, followed by a dropkick to Bey on the apron. TJP is about to fly but Bey pulls the referee towards him, causing hesitation. TJP hits one suplex after another but Bey avoids the follow-up Mamba Splash. TJP rolls up Bey to score the pin and the win.

Now that the cast of Wrestle House has returned to the IMPACT! Zone, Johnny Swinger once again co-hosts Locker Room Talk with Madison Rayne. The former Knockouts Champion welcomes her special guests, Kylie Rae and Susie. In typical Locker Room Talk fashion, Madison tries to stir up drama between Kylie Rae and current Knockouts champ, Deonna Purrazzo. Madison accuses Kylie of purposely crashing Deonna’s Black Tie Affair last week but the no.1 contender denies the accusation. Deonna and her new sidekick, Kimber Lee, crash the set and challenge Kylie and Susie to a tag team match next week. Kylie and Susie are up for some competition and accept the challenge.

Kiera Hogan and Tasha Steelz ask John E Bravo about whether or not they’re invited to the wedding. Bravo tells them that Taya Valkyrie has the list and it’s ultimately up to her. The duo wants to be Bravo’s best groomsmen but Bravo says that Taya would never allow it. They tell Bravo that he needs to be a man and stand up for himself before walking off.

Brian Myers is in the ring and reflects on his incredible achievements in pro wrestling thus far. The Most Professional Wrestler then calls out the man he recently defeated at Emergence, Willie Mack. Myers questions why Willie turned down his handshake after their match but offers him a chance to make it right. Willie once again turns him down and informs Myers that they have an impromptu match set to begin right now. Myers is in street clothes and wants no part of it but the match was made official by management after Myers cheated to win in their last encounter.

Myers tries to blindside Willie from the outset but Chocolate Thunder sees it coming. Willie takes control with a springboard dive to the floor. Myers turns the tide by driving Willie back first into the ring apron. Myers begins to wear his opponent down but Willie is able to create separation and start building momentum. Willie hits a big leg drop for two. Willie hits his signature Samoan Drop, followed by the standing Moonsault for another near fall. Willie connects with a powerful Spinebuster, then begins to pummel Myers in the corner. Willie tears the shirt off Myers and throws it across the ring. As the referee turns his back to remove it, Myers connects with a low blow, followed by the DDT to win.

Gia Miller interviews Jordynne Grace who is furious at Tenille Dashwood for thinking she can skip the line for a shot at the Knockouts Title. Jordynne tells Gia to follow her as she looks to confront Tenille in her locker room. Kaleb, Tenille’s personal photographer, answers the door and tells Jordynne that she’s going to have to wait until next week when Tenille makes her official return.

Kiera Hogan and Tasha Steelz approach Taya Valkyrie about her tyrannical control over the wedding of John E Bravo and Rosemary. As the wedding planner, Taya tells them they will have no part in the wedding, leading to Wera Loca challenging the Boricua Badass to a singles match later tonight.

At Slammiversary, The Guns answered the Rascalz open challenge as they made their shocking return to IMPACT Wrestling. Tonight, they meet in a rematch with the Tag Team Championships on the line. The Rascalz jump-start the match by attacking the Guns on the ramp during their entrance. The Guns regain control as they cut off the ring, preventing Wentz from making the tag to Dez. Sabin and Shelley target the knees of Dez as they try to eliminate his high-flying ability. The Guns are in total control as they wear down both members of the Rascalz with in-sync submissions. Dez finally breaks it up with a standing Shooting Star to Shelley. Dez holds Sabin and Wentz connects a top rope double foot stomp for two. Sabin avoids Hot Fire Flame, allowing the Guns to put Wentz away with a double team flurry.

After the match, The North attack the Motor City Machine Guns. Ace Austin and Madman Fulton are next to hit the ring and are persuaded by Ethan Page to divide and conquer. The Good Brothers come to the aid of the Guns, assisting them in clearing the ring. Dez and Wentz join the fight as they dive over the top rope, crashing into everyone on the floor. One thing is clear, the tag team division is red hot on the road to Bound for Glory.

RVD and Katie Forbes reveal that their new series, The Whole F’N Talk Show, will debut next week on IMPACT!

Meanwhile, Sami Callihan promises that he won’t hack the debut episode of The Whole F’N Talk Show – because he has other plans.

It’s all about the numbers. #IMPACTonAXSTV @TheSamiCallihan pic.twitter.com/AxIXjMsd4d

Taya hits a dropkick in the early going. Kiera hooks the leg of Taya from the outside, allowing Tasha to gain control. At ringside, Bravo continues to plan his upcoming wedding with Rosemary as he takes his eye off the match and answers a phone call. Taya hits a sit-out powerbomb after calling for Bravo’s attention. Taya connects with a spear, followed by Road to Valhalla to win.

Post-match, Kiera and Tasha attack Taya from behind. Bravo interjects and breaks things up after a slight delay.

As he continues his search for EC3 and the TNA World Heavyweight Championship, Moose is led to his high school where he meets with his former football coach. Moose describes EC3 and asks him if he has seen anyone like that on campus. He says no but before Moose can leave, the coach utters EC3’s signature catchphrase “control your narrative, you’ve been warned”. After it becomes apparent that the coach is under EC3’s control, numerous EC3 followers appear but Moose is able to take them out before retreating.

Rhino tells Heath that after the stunt he pulled last week, he is no closer to getting a contract with IMPACT Wrestling. Heath says the ads are working but he needs more funding. Rhino knows a place where they can get some cold hard cash.

Old School Rules means there are no disqualifications, no countouts and anything goes. EY jumps off the top but Dreamer cuts him off with a kendo stick shot. Dreamer uses a steel chain across the eyes of EY. The World Class Maniac attempts a piledriver on the exposed concrete but Dreamer counters with a back bodydrop. EY sends Dreamer flying off the top, narrowly missing a pile of steel chairs. Dreamer stops the onslaught momentarily with a cutter. Dreamer hits an Irish whip into a steel garbage can, followed by a DDT for two. EY cracks his hockey mask off the skull of Dreamer, followed by a sick piledriver to win.

After the match, Eric Young attempts to eliminate Tommy Dreamer just like he did to Rich Swann and Eddie Edwards when Rich Swann himself makes his way to the ring on crutches. Swann saves Dreamer and sends EY retreating up the ramp after attacking him with his crutch. Swann and EY stare each other down as IMPACT! goes off the air.