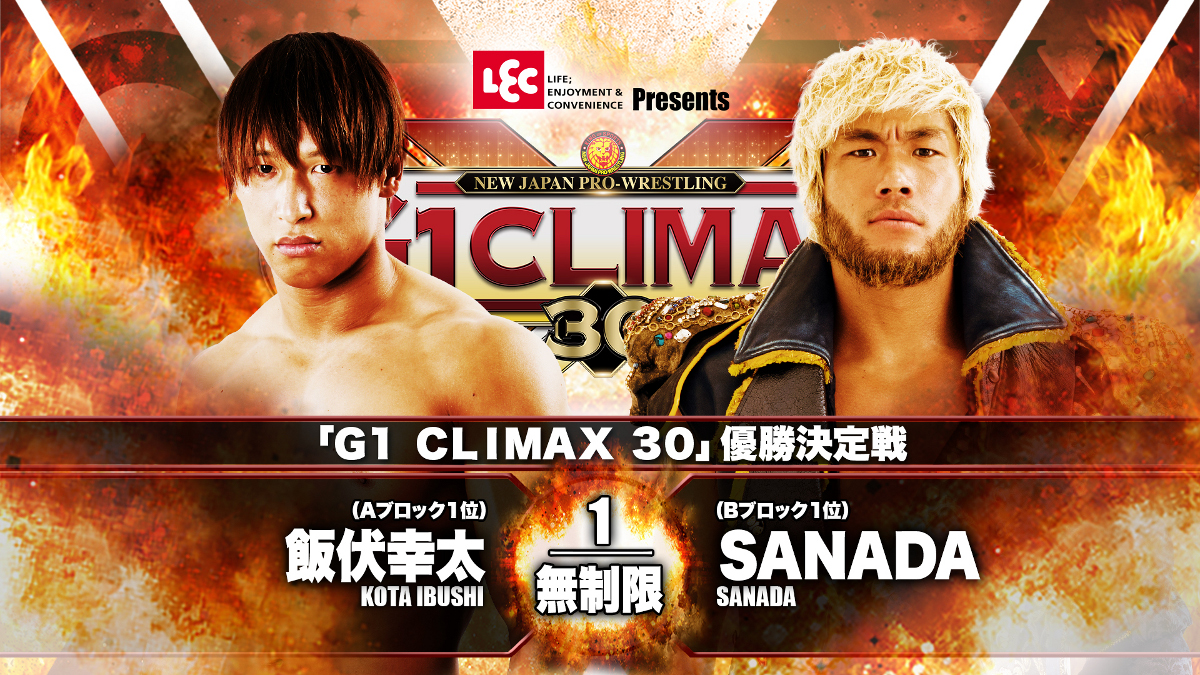 This was all about setting up challengers to the NEVER Six-Man titles. The match was nothing special.

Taichi and Ishii started off, trading kicks to each other’s bad legs. Sabre and Goto tagged in and Suzuki-gun turned this into a brawl around ringside. When the dust settled, Sabre began working over Goto’s bad shoulder.

Goto managed a tag to Yano. Sabre and Yano did some comedy.

DOUKI and YH tagged in for the closing sequence. Desperado jumped in and hit YH with a right hand. Sabre and Taichi hit YH with Zack Mephisto.

Taichi threw DOUKI on top of YH and DOUKI actually scored a pin.

Post-match, Suzuki-gun continued to beat down Ishii, Goto and YH. DOUKI used a steel pipe on Goto. Sabre used an octopus on Yano. Sabre hit a dragon screw on Ishii.

Suzuki-gun then posed with the NEVER Six-Man titles.

As you might expect, the intensity was off the charts in this one.

As soon as he stepped through the ropes, Suzuki went after Shingo. All four brawled around ringside. Kanemaru cut Hiromu off with a drive-by dropkick on the apron.

Kanemaru and Suzuki worked over Hiromu. Shingo got a hot tag and had an awesome exchange with Suzuki. They did a series of near-misses on signature spots. Suzuki avoided a sliding lariat. Shingo fought out of a choke. Suzuki no-sold a DVD. Shingo ate a PK.

Kanemaru and Hiromu tagged back in. Suzuki jumped in for a double team and again Hiromu found himself being worked over.

Kanemaru hit a Deep Impact but Shingo saved for Hiromu. Shingo hit a pop-up DVD on Kanemaru and fired Hiromu up.

Hiromu hit a running DVD into the buckle, then followed with Time Bomb and pinned Kanemaru.

Suzuki and Shingo had a pull-apart after the match.

They got very little time. As a result, this was all action and basically a fun house show match.

White teased starting off with Juice but begged off.

Ishimori and Wato started instead. Wato got cut off right away as Bullet Club turned this into a brawl around ringside. Bullet Club worked Wato over in their corner.

Cobb got a hot tag. He hit White with a dropkick before both tagged out.

Tana hit Gedo with a dragon screw. White jumped in and hit a dragon screw on Tana. Cobb press slammed White and Ishimori into Gedo. Juice hit a plancha to White. Wato hit a tornillo on Ishimori.

Tana hit Gedo with a slingblade. Cobb followed with a standing moonsault. Tanahashi then used a cloverleaf and Gedo tapped out.

Wrestle Kingdom 15 was officially announced for January 4 and January 5, 2021.

This was a decent showcase for Ospreay’s new faction.

Okada went right after Ospreay while making his entrance. They brawled around the ring while O-Khan and SHO started the match.

O-Khan used a variety of face rakes and chops in working SHO over. Ospreay tagged in for a couple of quick spots here and there but it was mostly O-Khan.

O-Khan missed a charge into the corner, allowing SHO enough time to set up a spear and tag out.

Okada hit O-Khan with a running back elbow and a DDT. O-Khan tied Okada to the tree of woe and used a series of stomps. O-Khan hit a sliding dropkick to Okada. Ospreay tagged in for Pip Pip Cheerio and a near fall.

Okada and Ospreay traded strikes. Okada blocked a tiger kick and hit a dropkick before tagging out.

SHO went for a power breaker but Ospreay escaped and went after SHO’s right knee. Ospreay took the ref and Priestley hit a dragon screw in the ropes on SHO.

Ospreay then used a figure four to submit SHO, while O-Khan sent Okada to the mat with a claw slam.

Winner: Great-O-Khan & Will Ospreay via Submission.

I guess we’re not done with EVIL and Naito.

I thought KENTA beating Naito Saturday would lead to something, and perhaps it still will, but EVIL looks to be next for Naito after this one.

The match began with Yujiro and EVIL illegally doubling up Naito. Naito made a comeback on Yujiro. Yujiro and EVIL resorted to brawling on the floor to regain the advantage. EVIL used chairs on Naito.

Back inside, Yujiro worked over BUSHI. BUSHI came back with a rana and tagged Naito. Naito hit Yujiro with a combinacion in the corner but kept his eyes focused on EVIL the whole time.

Yujiro bit Naito’s hand and EVIL tagged in. Naito hit a swing DDT. Both tagged out.

BUSHI hit a tope suicida and a DDT to EVIL. Togo took the ref. Yujiro jumped in for the double team. EVIL recovered and hit a fisherman buster for a two count.

Everyone jumped in for a big move near the finish. Yujiro sent Naito outside after a big boot. EVIL hit a lariat to cut BUSHI off before he could make his comeback.

EVIL hit Darkness Falls for a near fall, then used a scorpion deathlock for the submission.

After the match, Togo choked out Naito with a ligature. EVIL then hit Naito with Everything is EVIL and posed over him with the IWGP Heavyweight and IWGP Intercontinental titles.

My enjoyment of this was tempered by thefact that I was worried that Ibushi was concussed. The 35-plus minutes flew by. They really kicked it into high gear after the 20 minute mark and some of the near falls were amazing.

They started slowly, sizing each other up. Ibushi used a hammerlock and looked to be going after SANADA’s left arm. They traded a few holds.

They went to striking after a few minutes. Ibushi’s left leg was taped up after his kick war with Taichi on Friday. SANADA kicked at the bad leg.

There was a weird spot where SANADA went for a dropkick. Ibushi ducked under the dropkick but got caught by a SANADA forearm on top of his head. Ibushi rolled outside. Tough to say how much of this was selling and how much was legit but Ibushi looked out of it.

Ibushi got back in and they went back to trading holds on the mat. SANADA used an ankle lock. Ibushi slapped on an STF.

From there, they returned to striking. You almost never see anyone call spots in NJPW but you could see SANADA calling spots to Ibushi here. SANADA dropped Ibushi with a palm strike. SANADA then used a figure four. Ibushi forced a break.

SANADA dropped Ibushi with a forearm strike. Ibushi came back with a sunset flip into a standing moonsault for a near fall. We were past the 15 minute point and this still had not kicked into second gear.

SANADA rolled outside. Ibushi hit a plancha. Back in, Ibushi connected on a springboard missile dropkick for another two count. SANADA hit his leapfrog dropkick and follow-up plancha. SANADA tried to fire up the crowd.

Ibushi fought off a TKO. SANADA missed a moonsault. Ibushi hit a powerslam. Ibushi missed a phoenix splash. SANADA tried a moonsault but Ibushi rolled out of the way. SANADA landed on his feet out of the missed moonsault and sent Ibushi outside with a rana.

They teased a double countout at 23 minutes. Both made it back in at 18.

They did a striking sequence, both going after the other’s neck with forearm shots. SANADA hit one kick to the leg and then hit a magic screw inside the ring for a near fall.

SANADA locked on Skull End. Ibushi powered out at the 25 minute call.

SANADA tried for his springboard dropkick but Ibushi caught him coming off the ropes into a last ride. Ibushi sold his leg on landing and could not follow up with a cover.

Ibushi hit a strike combination and another last ride for a near fall. Ibushi made the motion that he was setting up for Kamigoye.

SANADA dropkicked Ibushi’s legs as Ibushi went for wrist control. Ibushi answered with a lariat. SANADA ducked a right hand and hit a tiger suplex for a two count.

SANADA went for a TKO. Ibushi grabbed a dragon sleeper on the way down. SANADA reversed into his own dragon sleeper before using a spinning Skull End.

SANADA got the full Skull End with body scissors in on the mat. Like an idiot, SANADA gave up the hold as Ibushi was about to have his arm dropped three times by the referee. SANADA always gives up on Skull End just when it’s working. It’s a logic flaw in his matches.

SANADA hit a moonsault to Ibushi’s back. He went for a standard moonsault but Ibushi got his knees up. Ibushi sold the damage to his bad leg in blocking the move.

SANADA tried Skull End again. Ibushi hit a high kick, a bicycle knee and a Kamigoye for another extremely close near fall.

Ibushi then hit a second Kamigoye for the 1-2-3.

Winner: Kota Ibushi via Pinfall to become the winner of the G1 Climax 2020 tournament.

Ibushi is The One for the second consecutive year.

Chono entered the ring and presented the G1 Climax trophy and flag to Ibushi. They posed together for the ringside photographers as Ibushi fought back tears.

Ibushi cut a promo in the ring. He thanked the fans and thanked Chono. Ibushi said he can’t wait for things to get back to the way they used to be with full buildings.

Ibushi said he intends to win the IWGP Heavyweight Championship, and he will become God.

The show ended with streamers falling from the ceiling and Ibushi posing with his trophy and flag.

After the show, Ibushi sat at a table backstage for his post-match comments.

White said Ibushi isn’t really the winner. He said sometime soon, they’re going to give Ibushi a briefcase to signify his win. White said he’s going to take that case from Ibushi.

Ibushi then gave his comments. He said he will face Jay at any time.