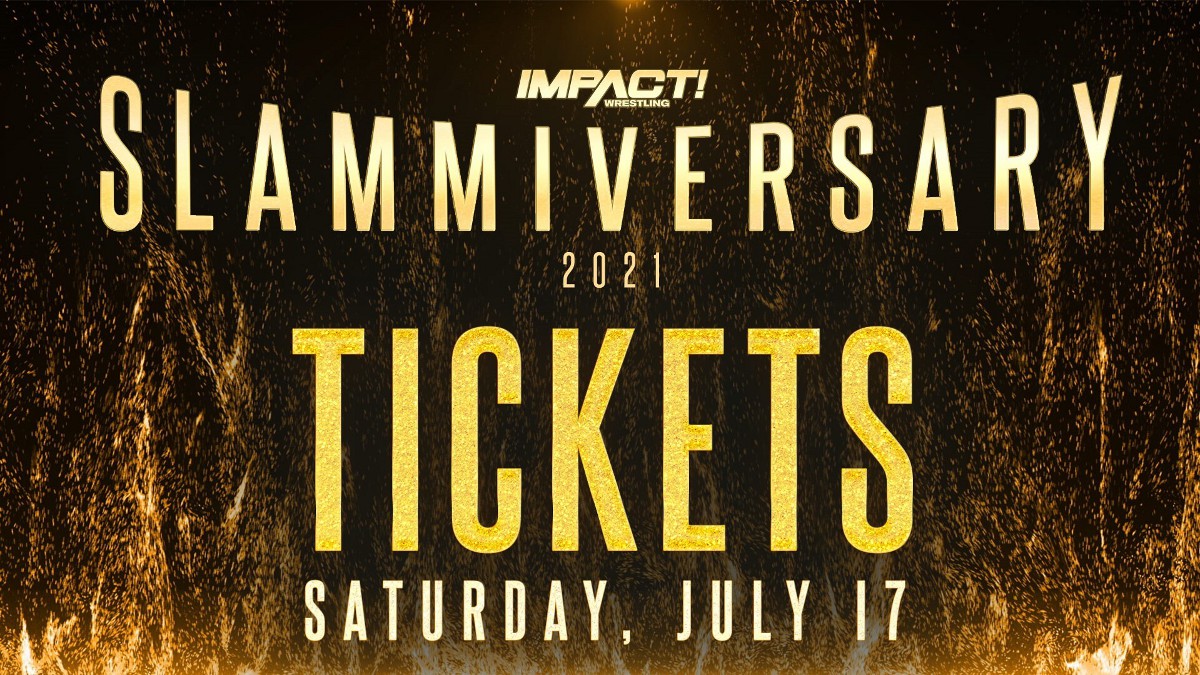 Impact Wrestling recently announced that they will be allowing a limited number of fans to attend next month’s Slammiversary event in Nashville, Tennessee.

Tickets for this event went on sale starting earlier today and fans will be required to follow all state and local guidelines for the coronavirus pandemic.

Slammiversary tickets will go on-sale this Friday, June 4, starting at 10am ET, athttp://impac.tw/slammtix

Due to the limited number of tickets that will be available, ALL tickets will be part of IMPACT’s new Super Premium VIP Ticket Plan. Every seat is on the arena floor, ringside and comes with a bundle of perks that have never been offered in wrestling history.

Here are some the perks that all ticket-buyers will receive in addition to their seat:
* Commemorative ticket with lanyard.
* The official Slammiversary T-shirt.
* The official Slammiversary Mounted Poster.
* A post-show Commemorative Photo, Ringside or on the Entrance Ramp – with the actual, official X-Division Championship Belt.
* A Swatch of the official Match-Used Slammiversary Canvas. (Fans will have the chance to see the canvas be cut immediately after the PPV.)
* IMPACT-branded swag
* Complimentary water, soft drinks, chips, candy bars and some Robert Irvine’s Fit Crunch Protein Bars – courtesy of Robert Irvine and, of course, Gail Kim.

“We have waited over a year to say these three words: Welcome Back, Fans,” said IMPACT Executive Vice-President Scott D’Amore. “We know Slammiversary will be an amazing event, with title defenses, jaw-dropping excitement, breath-taking moves … AND NOW, FANS.

“I speak for everyone at IMPACT Wrestling when I say that we are thrilled to welcome back our fans. IMPACT is going to deliver an amazing night of action in front of the thunderous roar of fans for the first time since early-March 2020 at the two-night A-Town Beatdown in Atlanta.”

IMPACT Wrestling will continue to follow all state and local safety protocols, with the limited number of fans admitted into the venue.

This will be the first time Impact has held a live event with fans in attendance since March of 2020.

In honor of Pride Month, both Cody and Dustin Rhodes are currently selling a new shirt with all proceeds generated this month going towards the National Center For Transgender Equality.

Dragon Gate recently announced that they have cancelled their June 14th event in Fukuoka and their June 19th and 20th events in Okinawa due to the current state of emergency for the coronavirus pandemic in Japan.

Ring of Honor recently announced that Willow, also known as Willow Nightingale, is the next official entrant for their upcoming Women’s World Title Tournament, which takes place this summer.

Major League Wrestling announced that they have recently signed King Muertes (former Mil Muertes in Lucha Underground), Lee Moriarty, and Aramis to official contracts with the company. Muertes’ deal was stated to be multi-year in length while Moriarity and Aramis were among those drafted in this week’s MLW Open Draft round.

During a recent interview with the MPW On a Mission podcast, Madi Wrenkowski revealed that she will be out of action for AEW for the next six to eight weeks due to her recently suffering a nose fracture injury. Wrenkowski stated “I had to go to the doctor and my nose is fractured. It’s literally broken. They are estimating I’m out four to six weeks.I did have a couple of bookings, some more major than others, and I, unfortunately, had to send an email saying, ‘I’m sorry, my nose is broken.’ How do you email a major company like, ‘Oh, I’m sorry.'” (Transcript h/t: Fightful.com)

Big Japan Pro Wrestling announced (English translation via Post Wrestling) that they have cancelled all of their upcoming events until June 13th due to several talents recently tested positive for COVID-19 and the company wanting to prevent a COVID-19 outbreak within their locker room.