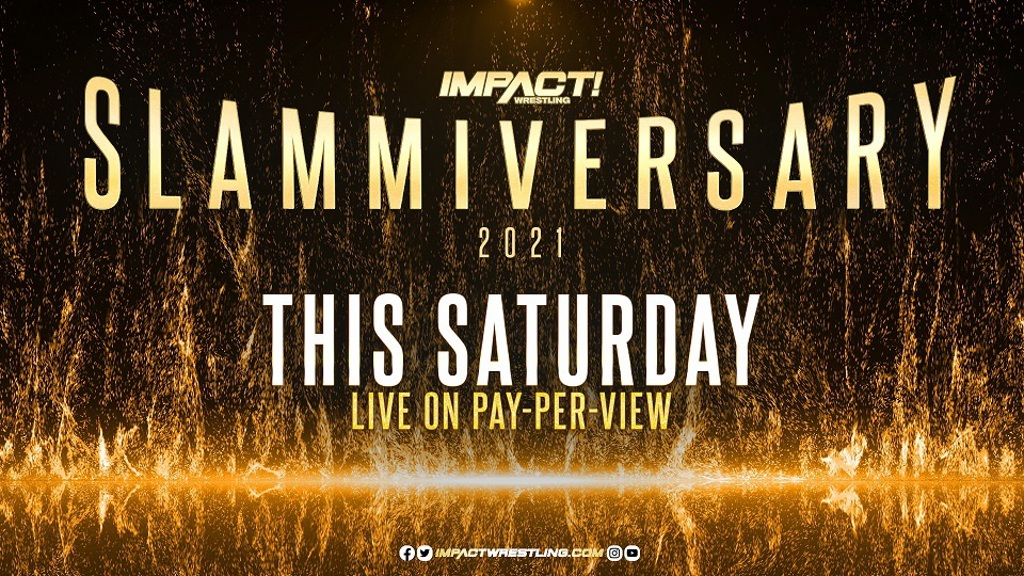 Impact Wrestling recently announced that they have made two changes to the card of tonight’s Slammiversary 2021 event in Nashville, Tennessee.

The first was the announcement of TJP being pulled from the event due to reasons not stated. The four-way tag team match for the Impact Tag Team Championship was announced to be going forward as planned but with Fallah Bahh to be given a new tag team partner as TJP’s replacement.

He was scheduled to team with @FALLAH1 in the huge 4-way collision for the IMPACT Tag Team Championship.

The match-up will still go ahead as a 4-way.

The other was the announcement of the Knockouts Tag Team Championship match of Havok & Rosemary vs. Fire N’Flava (c) will now be taking place on Slammiversary’s Countdown pre-show.

BREAKING: The LIVE Countdown to #Slammiversary show featuring @RealTSteelz and @HoganKnowsBest3 vs. @WeAreRosemary and @FearHavok will stream live TOMORROW at 7/6c on PPV providers, @FiteTV and IMPACT's digital platforms!

“As for Matt Striker, I’ve seen comments, I’ve seen questions. So Ross Forman, for those that don’t know, is our Impact Wrestling publicist and so many other things that he handles, too numerous to mention. He’s going to give me crap for this, but I’ll say it right here, Matt Striker will be at the desk at Slammiversary. He’s chomping at the bit to get back. Matt needed some time and we gave that to him. We were happy to support him and give him the time he needed to take care of what he needed to take care of. And he’s excited to get back in that chair and call one of the best damn pay-per-views out there this Saturday night on Slammiversary.”

On the topic of Don Callis’ removal from an executive role in Impact, D’Amore stated:

“I think we’re in a great place. I think Don’s right where he should be. I think he is one of the best talkers in the business. I think he’s a great mind. I think he’s a guy who’s also at a point in his life. It’s easy to forget that me and Don have been friends for so long. And when you’re in your 20s, your 30s… Whether you’re 23, or 29, or 30, you’re in a much different place. As we get older… I mean, Don respectfully has got a handful of years on me. I know, last week on the show, he said 47. But I think we all know that’s not true. Where he’s at in life, I think he’s in a great place. Me and him talked for 90 minutes last night. And it was just great. I think we have a great crew. One of the things that I’ve always strived to do and it’s not just with Impact Wrestling, it’s not just in the restaurant business but it’s with any business or any organization I’m involved in, I was taught this many years ago. If you really have built a strong organization, then you can take any one piece out, and the machine’s going to keep going. Because you’re going to backfill and go. And Don’s contributions over the years, we’re very grateful for having him. But this has been a process over the course of the last couple of years. Like it’s not like, ‘Oh sh*t, tomorrow we’re making this change.’ It’s been a gradual thing. From 2018 to 2019, 2020 and ’21, this is the direction we’ve been heading. And I think he’s where he should be. And I think we’re where we should be.”

A recent episode of the WrestleSlam podcast had Moose as the guest. One of the topics discussed included Moose revealing the origin of his current Moose character’s persona in Impact Wrestling.

“Yeah, I hate to put this guy over because I mean, he’s one of my friends but he’s annoying as f*ck, Don Callis, and one thing I learned from Don Callis is we actually spoke about [it]. He helped me with this character that you would call it and he told me to watch this movie No Country for Old Men. I don’t know if you’ve seen it and the way that-that guy spoke, it was kind of like, he never really showed emotion, he never really showed anger or pain or… empathy. He never showed anything. He just talked in kind of a monotone set and we talked about me trying that and I watched the movie and I loved it and I was like, ‘Man, I see exactly what Don means.’ I forgot the guy’s name that we’re talking about but, yeah. So that character you see with Moose on TV, especially in his promos is a version of that character from No Country for Old Men.”