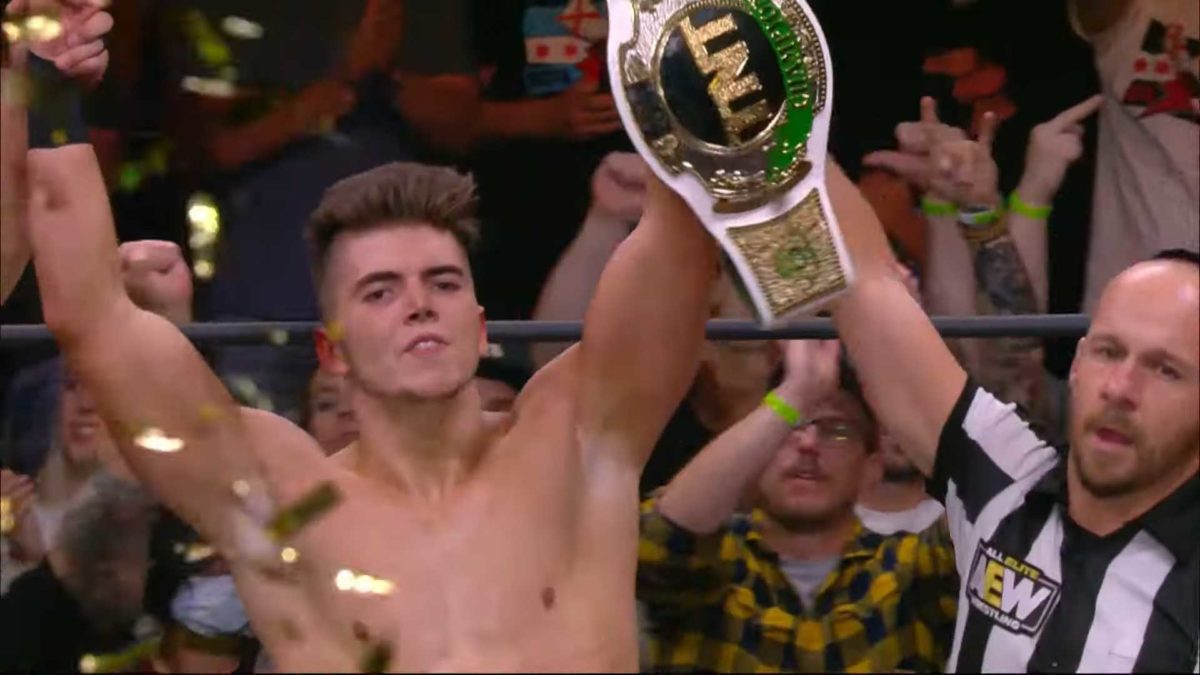 Wednesday’s episode of AEW Dynamite featured a TNT Championship match of Sammy Guevara vs. Miro for the main event of the show. Guevara defeated Miro to become the new TNT Champion, ending Miro’s reign of 140 days as champion.

Fightful Select reported that AEW’s plans to crown a new TNT champion that night had circulated backstage a few hours prior to the start of the show.

It was reported that AEW officials had decided on plans for a title change around the time of their All Out 2021 event earlier this month. It was also reported that AEW officials had plans at one point for this title change to take place during the September 22nd Dynamite Grand Slam event at the Arthur Ashe Stadium but decided to delay their plans for this week’s Dynamite show instead.

Prior to the start of AEW’s Dynamite show this past Wednesday, the wife and brother of the late Jon Huber, known as Brodie Lee in AEW, announced that they will be launching a new non-profit organization in Lee’s honor.

This new organization is called the Jon Huber Legacy Foundation and will be dedicated to helping people who have been unable to reach the next step of their careers due to family obligations.

ROCHESTER, NY, September 29 – On the same day All Elite Wrestling (AEW) makes its debut in Jon Huber’s hometown of Rochester, NY, his family and friends are announcing the  creation of the Jon Huber Legacy Foundation.

The Foundation will focus on providing support to people in creative fields who have not taken  the next step in their career because of family obligations.

“Jon almost gave up on his dream of wrestling because of his family,” said Amanda Huber, “But  he got the call to move up to WWE while we were in the hospital with our first child. I can’t  think of a better way of honoring his commitment to family and his career than to help other  people who are facing the same dilemma.”

Beginning in 2022, the Foundation will select a group of creative individuals to support with  resources, connections, practical skills, and direct funding. The cohort will meet throughout the  year to learn from experts in areas including business planning, artist management, public  relations, brand management, finances, and IP law. These skills and connections will help them  provide for their families while also helping them pursue their dreams.

“Many artists and wrestlers are never taught how to manage their finances, investments, and  assets in a way to make sure their family is secure,” said Chris Huber, “Like our father, Jon  always wanted to make sure he was making decisions that were the right decision not only for  his career, but also for his family.”

The foundation will announce its first application round in early 2022.

As part of the celebrations of the launch of the Jon Huber Legacy Foundation, AEW announced that they have released a new special Brodie Lee themed shirt at their online shop with all proceeds going towards the Foundation.

The Butcher & The Blade on Origins of Their Ring Names

Syracuse-based news website LocalSYR.com held a recent interview with The Butcher & The Blade. One of the topics discussed included The Butcher and The Blade revealing the origins of their wrestling ring names.

The Butcher – “The concept for the name was taken from “White Men Can’t Jump.” They go against ‘The Duck’ and ‘The King’ or whatever their name is. And that is literally how I came up with ‘The’ (before the name). That whole movie culminates with those two (Wesley Snipes and Woody Harrelson) going against these ‘end bosses.’ The whole concept for the tag team that we’re the ‘end bosses.’”

The Blade – “We always (refer to ourselves) as heavies in like 90s movies. (The Butcher) always uses the example of the dude in ‘Roadhouse.’ Who had a knife in his boots, a shell necklace, and rips dude’s throats out. They never explain any of it. (Laughs)”

The Butcher – “They legit never explain the fact that this guy is wearing a native, bone necklace. They’re never like, “We’ve got this indigenous dude and he is a bada**.” It’s just like, here is this slick haired pretty looking due who can throw a sick wheel-house kick with something that has a knife in it. And that’s what we are. (Laughs)”

The Blade – “And, at least in 90s movies, it was always dudes losing their hair and that works out great for us. (Laughs)”