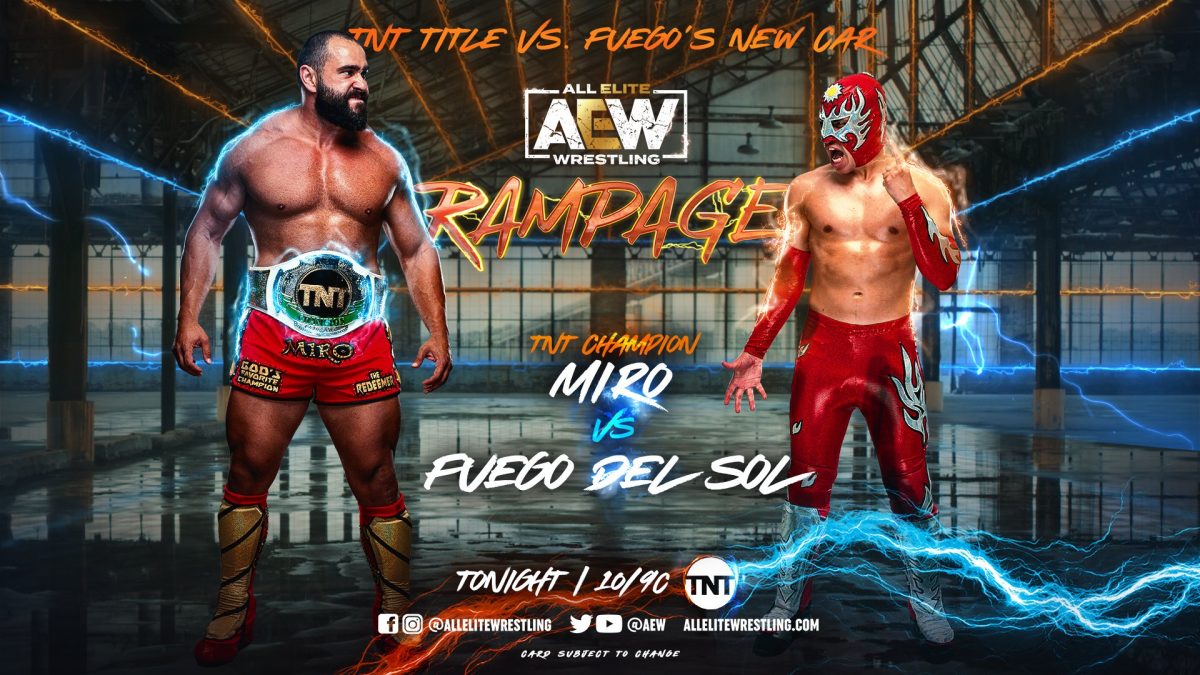 This week’s show kicks off with the usual signature opening video and then we shoot inside the Prudential Center in Newark, N.J. where Excalibur welcomes us to the show as fireworks and pyro explodes throughout the arena while the camera pans the venue. Ricky Starks is on commentary instead of Mark Henry.

The bell sounds and Blade and Rey Fenix kick things off for their respective teams. Blade has trouble keeping up with Fenix early on, as the commentators point out on the broadcast.

All four men hit the ring for a couple of back-to-back double-team spots where Fenix and Penta El Zero Miedo continue to dominate the action here in the early goings of our first bout of the evening here on Rampage.

Penta tags in and after dominating the action for a bit, he hits a crazy high spot that pops the crowd. After that, we head into a mid-match, picture-in-picture commercial break as the action continues.

When we return from the break, we see that Blade and Butcher have taken over on offense. Blade is controlling things in the ring and Butcher tags in. They keep Fenix from making the tag to Penta for a while, but eventually he makes the tag.

A double-stomp fear-factor nearly finishes this one off, however Butcher hits the ring to break up the pin. He drags Blade to his corner and then tags himself in and takes over, brutalizing Penta and slowing the pace of this match down before tagging Blade right back in.

Blade ends up using the mask of Penta to tie him into the turnbuckle in the corner. Taz reminds Ricky Starks on commentary to steal that idea for future use. With Penta tied to the rope in the corner and knocked out, Blade and Butcher double-team Fenix in open-season fashion while the ref watches.

They nearly finish him off until Penta takes his own mask off to free himself. He covers his face and connects with a super kick that allows Fenix to score the pin. With the win, they retain the titles.

Once the match wraps up, The Hardy Family Office hit the ring and begin beating down The Lucha Bros until finally, Santana & Ortiz run out with the Dead Presidents face-paint on, to run off the HFO.

A special vignette package airs and features new comments from the two as they hype their first-ever showdown in Bryan Danielson’s AEW in-ring debut when they meet at the Dynamite Grand Slam show at Arthur Ashe Stadium next Wednesday night.

Omega talks about Danielson having an unearned sense of entitlement and confidence and vows that Danielson will not have a cinderella ending to his story here in AEW when he meets him in the ring next week in Queens, N.Y.

The Bunny vs. Anna Jay

The Bunny’s theme hits and out she comes as she heads down to the ring for our next match of the evening. She settles in the ring and hits a big split as the fans pop.

Her music dies down and now Anna Jay makes her way out. As she heads down to the ringside area, The Bunny exits the ring and attacks her before she can enter the ring.

The brawl breaks out at ringside and then Bunny brings Jay into the ring. The bell sounds and now we’re officially off-and-running with this one-on-one women’s match.

We head to a mid-match commercial break as Bunny starts to dominate the action. Penelope Ford gets up on the apron, but Tay Conti attacks her. This distracts the Bunny and Anna Jay ends up scoring the pin fall victory with a roll up.

After the match, Bunny attacks Anna and we see Penelope Ford put on the brass knucks and knock out both Tay Conti and Anna Jay.

“You ain’t faced nothing like this!” After a brutal attack on #AEWDynamite, a confident @TrueWillieHobbs battles @CMPunk next Friday on a special 2-hour #AEWRampage: Grand Slam in Punk’s first TV match in more than 7 years – Watch #AEWRampage NOW on @tntdrama pic.twitter.com/Pz8Az8cfT1

We shoot to a video package where Taz and Powerhouse Hobbs have some words for CM Punk as highlights are shown of the attack Hobbs and Hook laid on Punk during this past Wednesday night’s Dynamite. They vow to beat him down at Grand Slam next week.

He then points out a fan that has hair like Orange Cassidy, according to Hardy. He brings the fan in the ring with the help of TH2 and some of his HFO members. They end up shaving the fans hair off until Orange Cassidy’s theme hits and “The Freshly Squeezed” one runs out and runs off Hardy and the HFO. After this we head to another commercial break.

As we settle back in from the break, Tony Schiavone is standing in the ring and now it’s time for our face-to-face segment that he will be moderating.

The AEW Women’s Champion is then introduced and out comes Dr. Britt Baker, D.M.D. She waits in the ring as the number one contender and her next title challenger, Ruby Soho, is introduced.

“Ruby Soho” plays and out she comes as fans, and even Taz on commentary, sing along. The music dies down and now we’re off-and-running with this advertised segment.

Baker talks down Soho for changing her hair color and name often and welcomes her to some television time. Soho says she knows who she is and claims to know who Baker is as well, because she reminds us on TV every week.

She brings up Baker “banging some dude in the back,” which elicits an enormous reaction from the fans. Baker gets her back when she brings up Soho’s “The Runaway” moniker, only to remind her she wasn’t running from anywhere — she was fired.

Soho says Baker isn’t wrong and calls getting fired the best thing that happened to her. Soho tells Baker to look in her eyes. Baker does and then when she looks away she gets in her face and tells her to look at her. She asks how Baker can see anything with her head so far up Tony Khan’s ass.

Soho vows Baker won’t be able to call herself AEW Women’s Champion after they meet in the ring next week for the title. Baker tries to take a cheap shot at Soho but Soho beats her down and Baker exits to the back as Soho poses in the ring holding the AEW Women’s Championship up high. Excellent, excellent segment from these two to promote their title showdown next week.

They run down the card for next week’s Dynamite and Rampage in Queens.

A lot on the line up next in the MAIN EVENT of #AEWRampage: TNT Champion @ToBeMiro defends his title against @FuegoDelSol’s new car – Watch #AEWRampage NOW on @tntdrama pic.twitter.com/f02AYsY5oT

Now we shoot to our weekly pre-main event split-screen interview. Mark Henry is joined by Fuego Del Sol and TNT Champion Miro. He asks Fuego about putting his new car on-the-line for another shot at the TNT title. He says it’s worth it.

Miro talks about taking the challenge because he likes to please his God up high and have his hot wife please him down low.

We hear the bell sound and we’re off-and-running with this one. The commentators talk about the high stakes in this contest as these two circle each other in the ring. Fuego starts peppering the champ with some leg kicks but Miro brushes them off.

On the floor, Fuego tries launching from the ropes to splash onto the TNT Champion, however Miro catches him. Fuego escapes out the back door and shoves Miro into the steel ring post. He hits him with some follow-up shots and then hops on the ring apron and catches Miro with a hurricanrana.

Miro catches Fuego as he runs at him on the floor, and he goes to back body-drop him into the crowd, however a fan catches Fuego and keeps him on his feet. Miro ends up catching Fuego again and this time he launches him overhead with a fall-away slam.

The action returns inside the ring as we head to a mid-match, picture-in-picture commercial break as Miro continues to dominate the action in this TNT Championship main event here on AEW Rampage on TNT.

We return from the break and we see Miro has Fuego in a big bear hug. Fuego headbutts his way free and starts using his speed and quickness to get in some offense on a weakened Miro. Fuego fires away at the champ as the fans start to make some noise, rallying behind him.

Fuego springboards off the ropes but right into a big shot from the waiting Miro. Miro does the finger shake to the fans to let them know this Cinderella story isn’t having a fairytale ending. He goes for a DDT on Fuego but Fuego avoids it and Miro drops down to the mat hard on his own. Fuego kicks Miro down and hits him with a double stomp.

Another kick from Fuego to the dome of Miro is followed by a big spot. He calls for his tornado DDT finisher but when he goes for it, Miro cuts him off and starts beating Fuego down and taking over on offense again. Miro beats Fuego down and clearly has him finished off but decides to beat him up needlessly some more before finally mercifully ending this one with a jumping kick to the head and pinning him to retain his title and win Fuego’s car in the process.

After the win, Miro is handing the car keys. He teases throwing them in the crowd but he decides not to. Instead he shoves the keys in Fuego’s mouth and then locks him in his Game Over finisher. He squeezes and chokes the life out of Fuego for no reason.

Finally, Sammy Guevara runs down and hits the ring and beats Miro down with a leaping knee strike that sends him out to the floor. Guevara makes the save for his best friend Fuego and runs off the TNT Champion. Sammy notices the TNT title still laying in the ring. He picks it up and plays to the crowd with it as they make some noise and Miro loses his mind in the aisle way.