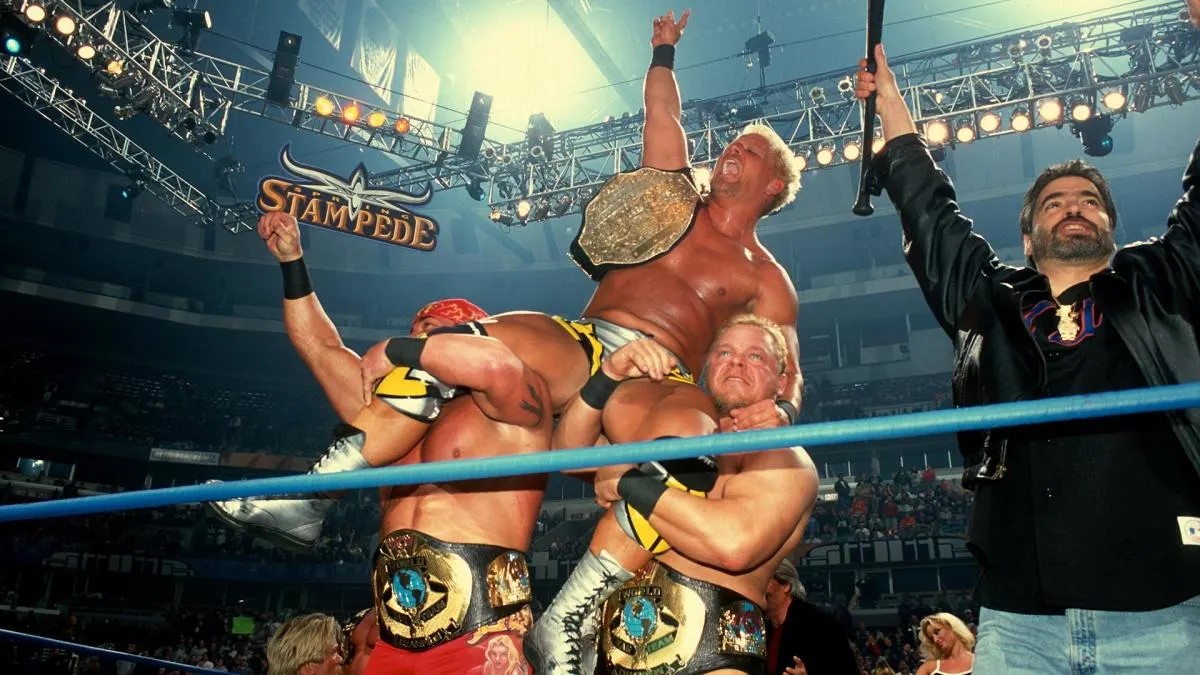 Jeff Jarrett Comments on Favorite Championship Victory of His Career

A recent episode of the My World podcast featured co-host Jeff Jarrett discussing a variety of wrestling related topics. One of the topics discussed included Jarrett’s thoughts on which championship victory was his favorite from his wrestling career.

“I’ll steal [Vince] Russo’s line here. That NWA belt that’s over my shoulder, was still a prop, but it was ‘the’ prop. Touring [meant] he went from town to town to promote it, different bosses, different owners, but he was still the champion. That belt wouldn’t change hands. I’m saying this out of complete respect, the emotion that we had as fans were, ‘Wow, he’s the real World Heavyweight Champion.’ Versus, ‘Hulk is Vince’s champion. Oh, big gold belt. That’s Billionaire Ted’s champion,’ or however we put it in our brain.

I guess what I’m saying is, I wish the fans of today could wrap their emotional investment into the industry. I know it’s different. It’s just different. You can’t go back and play a basketball game without a three-point line. I’m just here on Ask Jeff Anything, I think it’s just fascinating that the emotion that we had as kids on that real World Champion mentality, a lot of fun. So for me, it was like the NWA when we worked out the agreement, NWA and there were still 12 promoters in the NWA and Japan was recognized and all that, that was a really cool deal. I like both of them, for a lot of reasons.

Me winning the WCW World Heavyweight Champion, that’s the first world champion that will always hold the most special place, by far. I had zero decision in it and obviously, all the baggage that goes with that. I didn’t hold anybody up with a gun. My contract wasn’t about to expire. There was no leverage. It was, ‘Jeff, we’re gonna make you champion, that the big gold will always hold the most special place.'”

Tony Schiavone Comments on His Role in Helping with AEW Rampage

“One of the things about Rampage, what it’s done to my life, is because I do work behind the scenes on Rampage and am starting to do more pre-tapes, but when I’m not doing a pre-tape, I will try to get on a headset and talk to Ricky Starks and remind the announcers of some of the storylines. I feel kind of odd doing that because I know Excalibur knows. He’s always like, ‘I appreciate you reminding me.’ Then, because of my work, when I get home on Thursday, later that afternoon, I get the screener and I watch it again through the screener and make notes of shots that should be cleaned up or things the announcers may have said that should be pulled out. That pretty much encompasses my Thursday. Instead of laying around with the dog, I’ve got work to get Rampage ready. When it airs on Friday night, I click it in and walk away. Lois will say, ‘isn’t your show on?’ ‘I’ve seen it twice my dear. I just want to make sure it’s on.”

Indie wrestler Markus Crane, real name Mark Pobanz, passed away on Monday at the age of 33. Crane’s passing was first announced by Freelance Underground. One co-worker of Crane stated on Reddit that he had passed away in his sleep and had complained about having headaches before taking a nap. Prior to his passing, Crane had brain surgery in 2019 to remove an infection that was eroding his skull and leaking into his brain. Crane’s career in wrestling spanned from 2009 to 2021 and was most known for his work as a deathmatch wrestler throughout the indies.

Major League Wrestling announced that they will be launching a new series called “DEC0DED” this Wednesday. It was announced that this new series will be an “all access look at your favorite athletes, moments and people from the world of MLW” and will feature Jacob Fatu as the first person focused upon.

NJPW recently announced that Katsuyori Shibata’s upcoming match at Night 1 of their Wrestle Kingdom 16 event on January 4, 2022 will be held under Catch Wrestling rules. In regards to the rules, it was announced that “stretches and submissions will be in use, as well as throws. Victory will be attained as usual, via pinfall, submission, countout etc. However, strikes of any kind will be prohibited”

Booker T recently announced on Twitter that his Reality of Wrestling promotion has cancelled their upcoming event this Sunday in Dayton, Texas due to COVID-19 related precautionary reasons.

Deadlock Pro-Wrestling announced that Blake Christian will be making an appearance for the company at their You Already Know event on January 8, 2022 in Raleigh, North Carolina.