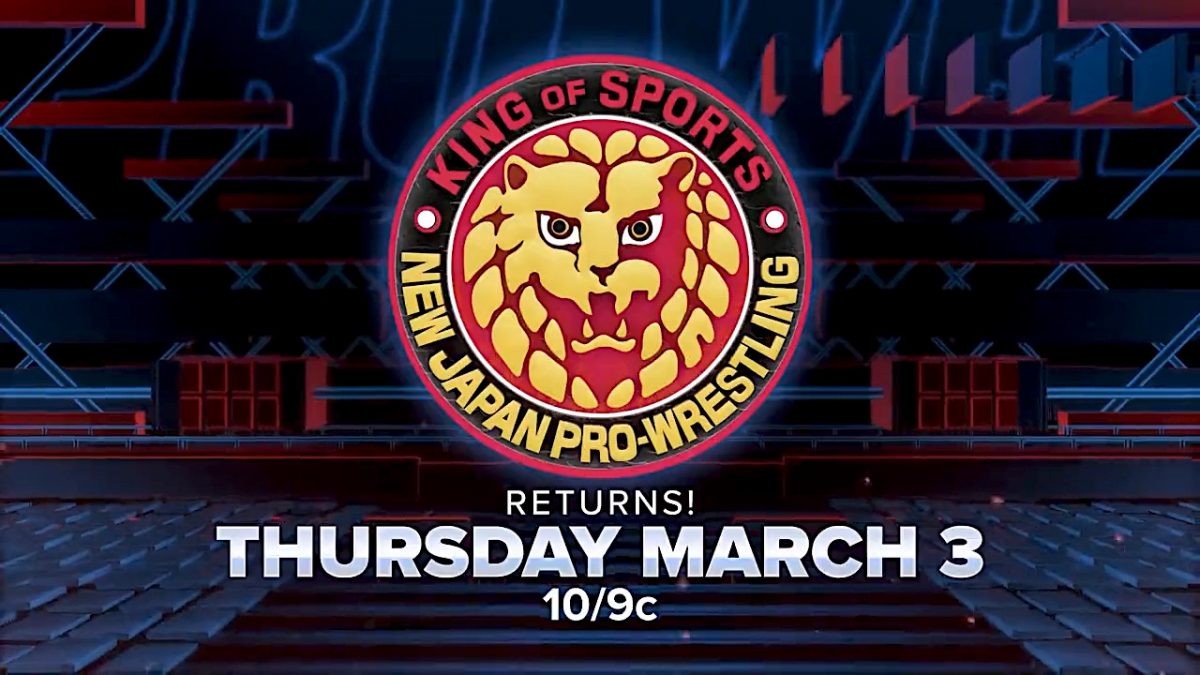 NJPW announced that they will be returning to AXS TV with a weekly show starting on January 20.

It’s not clear yet what the new episodes will consist of, but they will likely feature various NJPW matches from recent months.

NJPW aired on AXS from 2014-2019, but their deal ended once Impact’s parent company Anthem bought the network. Now that Impact and NJPW have a working relationship, a deal was made to bring the show back to the network.

AXS TV ANNOUNCES THE RETURN OF NEW JAPAN PRO-WRESTLING TO THE NETWORK’S LINEUP WITH ALL-NEW EPISODES BEGINNING MARCH 3, KICKING OFF WITH SIX CLASSIC EPISODES ON JAN. 20 AT 10 P.M. ET

The agreement gives AXS TV the option to air encore presentations of past NJPW broadcasts from its five-year run on the Network, bringing even more exclusive NJPW action to subscribers across the U.S., Canada and the Caribbean. The move also includes Anthem sister station Fight Network, allowing the premier combat sports outlet to share this slate of new and classic NJPW content to viewers throughout Canada, Europe, Africa and the Middle East, as well.

As a special lead-in to the fresh crop of episodes debuting March 3, the Network will air six of the absolute best episodes from NJPW’s initial AXS TV run. The commemorative block airs from January 20 through February 24, and kicks off with a presentation of 2018’s unforgettable Wrestle Kingdom 12—featuring a pulse-pounding main event matchup pitting pro wrestling legend Chris Jericho against fan-favorite Kenny Omega in a no disqualification bout for the IWGP United States Heavyweight Championship.

The upcoming series features all-new episodes of world-class New Japan Pro-Wrestling action, bolstering an already-impressive wrestling lineup with one hour of exclusive content compiling the absolute best moments from the iconic promotion’s most recent broadcasts. Now in its 50TH year, New Japan Pro-Wrestling has established itself as one of the most influential international promotions in professional wrestling, blending unparalleled pageantry with hard-hitting squared-circle bouts to create a dynamic experience that is uniquely its own.

NJPW’s return to the AXS TV roster is marked with a stacked programming lineup on Thursday, January 20, kicking off with a throwback classic IMPACT Wrestling pay-per-view event at 3 p.m. ET. Other highlights include a special edition of IMPACT In 60; followed by an all-new episode of IMPACT!; the AXS TV return of New Japan Pro-Wrestling at 10 p.m. ET; and an encore broadcast of the IMPACT! premiere.

“NJPW was a major highlight for the AXS TV audience during its original broadcast from 2015 to 2019, and we knew the time was right to welcome them back as part of our premier Thursday night wrestling lineup,” said Frank Tanki, President of Anthem’s Sports and Music Group. “For five decades, they have provided world-class content that has left an indelible mark on professional wrestling and given a global platform to some of the industry’s greatest figures. Now, AXS TV can further deliver to our fans by sharing all the spectacle and action that NJPW is known for, when NJPW returns on AXS TV on January 20th.”

“2021 was a landmark year in terms of breaking down the ‘Forbidden Door’ of professional wrestling,” said Scott D’Amore, EVP of Content Creation for Anthem’s Sports Group. “IMPACT and New Japan have played a key role in that, forging a strong inter-promotional relationship that resulted in some unforgettable moments for wrestling enthusiasts around the world. There is a great deal of support and synergy between the two companies, and we could not be more proud to have them back on AXS TV as they prepare to celebrate an incredible milestone in NJPW history. We are excited to continue to build on our growing relationship with NJPW, and look forward to seeing what new opportunities arise from this partnership in the future.”

“Thank you to our international fans for their patience. After two years away, we’re thrilled and grateful to return to US television and evolve a prosperous relationship with a key partner to our North America strategy in AXS TV. We hope fans enjoy being immersed in the action with New Japan each and every Thursday,” said Takami Ohbari, President of New Japan Pro-Wrestling Co., Ltd.

AXS TV produces the English-language version of New Japan Pro-Wrestling as a joint venture with New Japan World and in association with TV ASAHI CORPORATION.