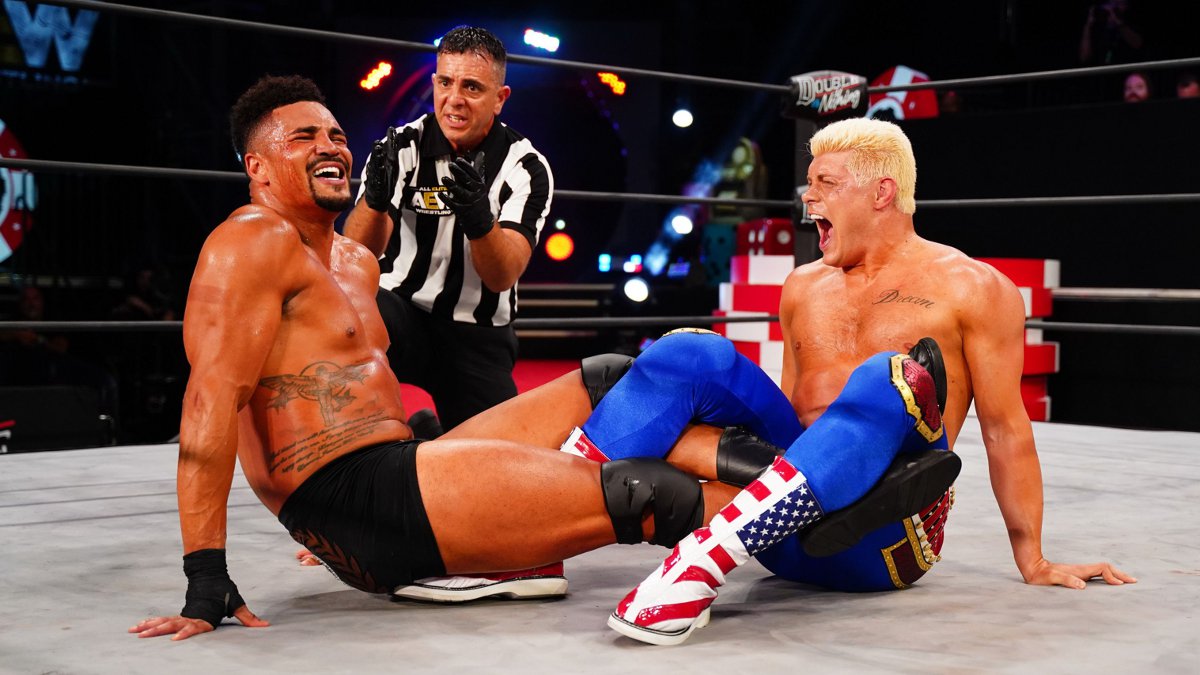 A recent episode of the Rasslin with Brandon Walker podcast had Cody Rhodes as the guest. One of the topics discussed included Rhodes’ regrets over how his storyline feud against Anthony Ogogo went down in AEW.

“I can, on record, just go ahead and say [that] I regret almost everything about the Anthony Ogogo angle. Almost everything about it. I’m good now and comfortable now. Anthony is a former Olympian, he’s definitely someone who’s a developmental talent who’s going to be — We’re training him and we recruited him and we’re bringing him up through the ranks. What ultimately — I’ve never gone on record saying this, but this is the perfect time. I stood by what I said in the promo. I stood by it because I thought the content was good and I thought the intentions were good. However, a white guy talking about race relations, who has an American flag tattoo on his neck, I can see why people would use the terms ‘tone-deaf’ when it came to that. Then trying to defend it and all — Just again, intentions were good and sincere and I was so excited about Brandi and the baby but it just — That should have just been one where I went out and almost just winged it.

Everything in wrestling I work really, really, really hard on. So you hear about Randy Savage, how he is about his matches and his promos — There are wrestlers who tend to be more like Randy in terms of their preparation, and then there are wrestlers who are more like my dad who are just cutting a promo on the produce at the grocery store and it’s better than most stuff you’ll hear on television. I tend to be more of the big-time thinker, planner, workshop, all that stuff, and I worked on that one really hard. That’s what made it even more like, ‘Damn, every now and then you’re going to come up to the plate and strike out.’ I overplanned it and struck out. Although I stand by it. I don’t have any problem with the content, but once that had happened, it set the angle in a way that Anthony, as far as wrestling age is concerned, he’s like 18, he’s a baby. He doesn’t know what’s going on. It set the angle in a tailspin where it just wasn’t a classic, USA vs. UK, fun-spirited deal. I was going to go over to the UK and have the return match. Now I just never want to think about it again.”

NJPW Announces Schedule of Events for First Half of 2022

During Wednesday’s Night Two of Wrestle Kingdom 16 event, New Japan Pro Wrestling announced their full schedule of events for the first half of 2022.

1.5 After the 4th match of Tokyo Dome, the schedule of the big match in the first half of 2022 was announced at the venue vision.

The biggest attention is that on May 1st (Sun), New Japan Pro-Wrestling will make a comeback at Fukuoka PayPay Dome for the first time in 21 years! “Wrestling Dontaku 2022” will be held !!

Please look forward to the 50th anniversary of the founding of New Japan Pro-Wrestling.

Total settlement of accounts for the first half of the year! * Title undecided

During a recent interview with the ROH Strong podcast, Maria Kanellis revealed that a new documentary based on this past year’s ROH Women’s World Championship tournament will premiere on the January 15th episode of ROH TV and will also be uploaded to ROH’s official YouTube channel.

During a recent House Hardy stream on Twitch, Mat Hardy announced that his brother Jeff will be the guest for the premiere episode of his upcoming The Extreme Life of Matt Hardy podcast series, which debuts on January 7th. Hardy also stated that the main topic of this debut episode will be him and Jeff discussing the famous ladder match they had with Edge & Christian at at WWF’s No Mercy 1999 event.

FITE TV recently announced that they will be increasing the price of AEW Plus subscriptions on their service to $6.99 per month starting on January 8th. The company announced that the official reason for the $2 price increase is due to additional AEW content being made available on the service over the past year.

Northeast Wrestling recently announced that Adam Scherr and Erick Redbeard, former Braun Strowman and Rowan in WWE, will be making an appearance for the company at their WrestleFest XXVI event on January 22nd in Poughkeepsie, New York. It was also announced that Scherr and Redbeard will be facing off against Bully Ray and nZo in a tag team match at the event.

Game Changer Wrestling recently announced that Jeff Jarrett will be making an appearance for the company at their Say You Will event on January 15th in Chicago, Illinois.

As noted before, All Japan Pro Wrestling stripped Jake Lee of his AJPW Triple Crown Championship due to him suffering a serious injury this past December. The company recently announced that they will be holding a one-night Triple Crown Championship tournament at their upcoming New Year Wars 2022 event on January 23rd in Tokyo, Japan to crown a new champion. (English translation via PostWrestling.com)