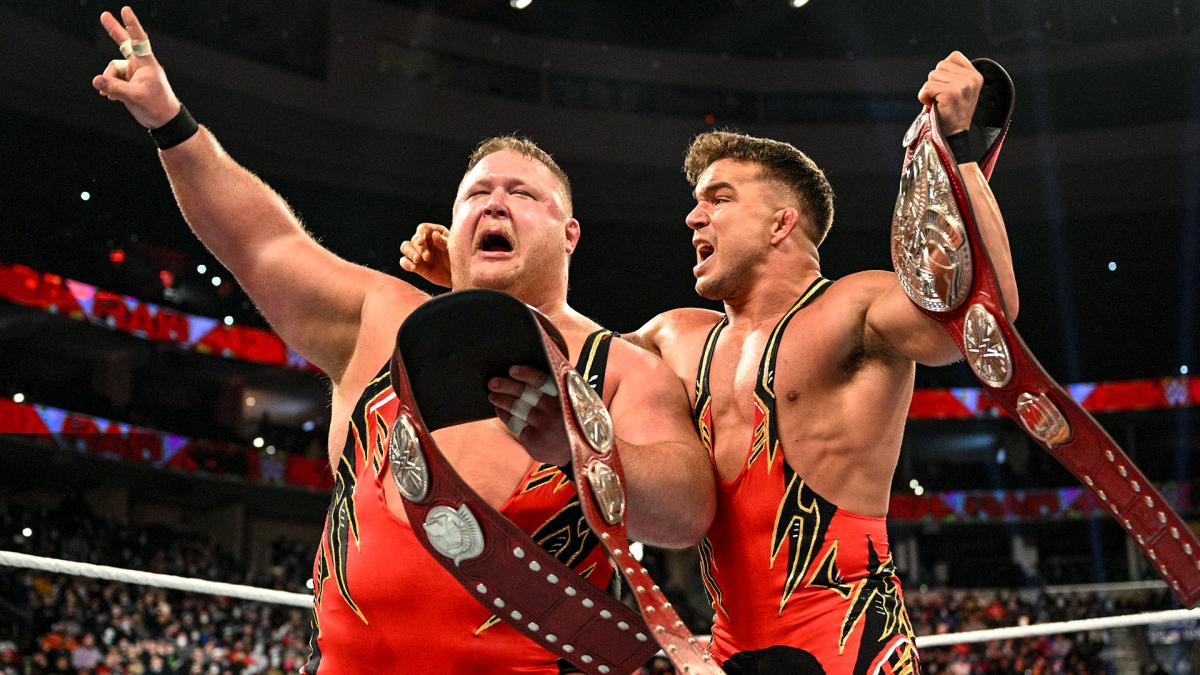 This past Monday’s episode of RAW featured a RAW Tag Team Championship match between Alpha Academy (Otis & Chad Gable) vs. champions RK-Bro, which was won by Alpha Academy.

Gable recently reflected on Instagram about his RAW Tag Team Championship victory and why it felt special winning the titles with his longtime friend Otis.

“There’s winning championships, and then there’s achieving dreams alongside your best friend.

@otis_wwe and I have been talking about a night like last night since we were training for the Olympics together in Colorado Springs in 2011.

The Alpha Academy relationship is much more than a tag team. It’s been a brotherhood for 10+ years.

After getting called up to RAW, I jokingly told Otis there was a house for sale up the street for me if he wanted to move in. Within days, he told me he put it an offer and would be there in a few weeks.

Since then, he’s come over nearly every single day for us to leave puddles of sweat in my garage in some of the grittiest training sessions you could ever imagine, all with the goal of continually making progress in this profession and in life. I could not be happier or more proud of this man.

My protege. My prized pupil. My #1 guy. But most importantly, my friend.

Eric Bischoff Comments on His WWE Appearance This Past December

A recent episode of the 83 Weeks with Eric Bischoff podcast had co-host Bischoff discusses a variety of topics. One of the topics discussed included Bischoff’s thoughts on his recent appearance for WWE at the December 27, 2021 episode of WWE RAW.

“I get a call from Bruce Prichard and Bruce and I don’t talk much because I know how busy he is. I tell Bruce, this, ‘Man, don’t be offended,’ because I don’t number one, I don’t spend a lot of time talking to people on the phone anyway, I just don’t like talking on the phone. I said, ‘Bruce, you know, I’m just not gonna call you a lot. Don’t think that’s because I don’t love you. I do. But I just don’t call people a lot in general. I especially don’t call someone like you, who I know, is working the kind of hours that you work and under the kind of stress you’re under. Because I remember when I was there last, for four months. You know, when that phone rings, it’s like, ‘Oh, fuck now what? Oh, god. Is it Vince?’ You know, you got to sleep with the phone by the bed because Vince might call you at three o’clock in the morning with an obscure question, and you have to have the answer to it and that’s kind of stressful. So I said, Bruce, I’ll just leave you alone. If you ever you’re in the mood to talk, you give me a shout.’.

So anyway, he called me and I saw it’s Bruce Prichard. It’s a couple of days before Christmas. I’m thinking now he just is calling to wish me Merry Christmas. So I knew as soon as he said ‘So,’ I can tell by the tone of it. I knew something was coming. ‘Do you think you can make TV on Monday? This is Thursday night, Thursday afternoon. I said, well, first of all, where is it? Because I’m in Florida. If it was like a West Coast trip, I couldn’t have made it. ‘In Detroit, your hometown.’ Okay. I can make that. It’s in well, what what is it goes? Well, you know how Bruce talks? Right? Yeah, ‘Well, why don’t you get a really light-colored pastel suit and expect it to get trashed? There’s gonna be a wedding.’ That’s all he told me.

I’m not the guy that wants to go around. Say hi to everybody and make sure everybody knows I’m there. I went right from the car, the drop me off at the venue, right into my dressing room and I stayed there and I figured, okay, well, when Bruce’s done or Vince is done, doing what they have to do, they’ll come and get me or send somebody to come over and see them or whatever. It’s about four o’clock in the afternoon. 4:30 I’m going out. I haven’t heard from Bruce yet. Finally, Ryan Ward. One of the writers came in. Ryan’s a good dude. Ryan says, ‘Hey, just so you know, Bruce isn’t here tonight. He isn’t feeling well. Okay, I get that. I said, ‘Where’s Vince?’ Well, he is not here either.’ ‘Okay, well, I’m gonna go out to the truck and say hi to Kevin. Kevin.’ ‘Kevin is not here either.’ Okay, let’s do this thing.”

Bischoff also gave his thoughts about his experience working in the wedding vow renewal ceremony segment with The Miz and Maryse.

“But I had fun. You know, I get to spend some time with you get to hang out with edge a little bit and we had a great conversation and Kevin Owens about I did Kevin we stay in touch through social media. But I had a blast doing it. And I have to say I was thinking about this morning. Actually, I was going through my social media. I saw something is about The Miz on there. You know, I’ve never really done anything in the ring, even a promo. I don’t think I’ve ever done anything with Miz before. I’ve never worked with him in any way, shape, or form. I worked with him on this is him and his wife, Maryse and they’re really really good at it. This is what I was thinking about this morning. When you get a chance to work with somebody on the mic the way I do, obviously not in a match, but when you are able to get in there with somebody that’s as good as Miz is and Maryse, she’s really good too.

It’s so much fun, and it’s so noticeable. There’s such a difference between someone who’s absolutely at the top of their game when it comes to dialogue and performing in that kind of type of a scenario versus someone who’s just not that familiar with it or hasn’t done a lot of it. There’s a reason why Miz has been there as long as he has at the level that he is because he is really, really good as a performer and it was fun working with him and his wife.”

As noted before, WWE recently announced the partial field for this year’s Women’s Royal Rumble match. Among the names revealed included several surprise entrants who are former WWE talents.

PWInsider’s Mike Johnson reported that his sources within WWE stated that the company had also contacted and booked both Melina and Cameron to be additional surprise entrants for this year’s Women’s Rumble match.