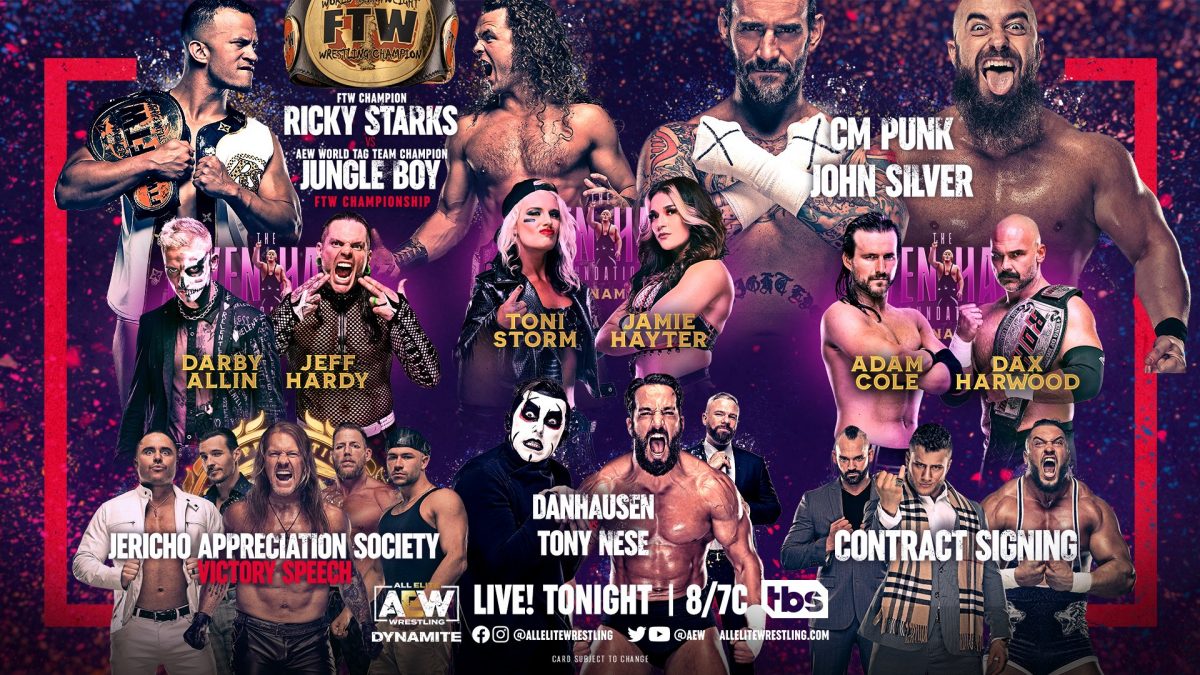 The bell rings and we are under way. Cole with an arm bar but Dax reverses it into a head lock take down. Cole to his feet and he gets Dax in the corner. The referee breaks it up and Dax with a chop to the chest. A right hand by Dax followed by another chop to the chest.

Dax runs to the ropes but a knee to the midsection by Cole. Right hands by Cole onto Dax. Cole with a neck breaker. Cole throws Dax in the corner and he chokes him with a boot to the throat. Cole sends Dax to the ropes but right hands by Dax. He drops Cole and goes for the sharpshooter but Cole pushes him away. Cole with a roll up but Dax reverses it into a roll up himself as Cole kicks out. Both men to their feet and Cole with a kick to the face. He grabs Dax and throws him ribs first into the ring post as Dax falls to the outside of the ring.

Back from commercial, Cole slams Dax chest first into the turnbuckle. Cole with a right hand. Forearms by Cole. He goes to send Dax to the ropes but Dax gets behind Cole and hits him with two German suplexes. He goes for a third but Cole gets a suplex of his own. Cole goes for a second suplex but Dax reverses it into another German suplex.

Allies @darbyallin & @jeffhardybrand stand opposite in the ring for the #OwenHart Foundation Tournament Quarterfinals later on tonight! Tune in NOW to #AEWDynamite LIVE on @tbsnetwork! pic.twitter.com/7A25xf89c7

Out comes CM Punk wearing a New York Islanders jersey. The bell rings and we are under way. Punk with a head lock but Silver reverses it with an arm bar. He throws Punk to the ropes and a shoulder block by Silver. Punk rolls out of the ring. Silver goes after Punk as Punk gets in the ring. A double axe by Punk. He gets Silver in the orner but Silver throws Punk in the corner and forearms by Silver as he stomps on Punk.

Silver climbs the second rope, he goes for a swinging DDT but Punk throws him down. A running clothesline by Punk.

Punk with a knee to the face. He sends Silver to the ropes and a side leg kick to the face. Punk on the ring apron, he hits Silver with the Buckshot Lariat. He goes for the cover and gets the pin.

“It’s just business.”#AEWDoN (Double Or Nothing) can’t come soon enough! Sunday May 29 is just around the corner and the #AEW World Championship between @CMPunk and champion #Hangman @theadampage is on the line! pic.twitter.com/9n5eiUktxF

Adam Page walks down to the ring. He and Punk go face to face. Punk asks him if he is mad. Punk says it’s not personal, it’s just business. Punk tells him he used to wake up every morning and ask himself if he is a good guy. This morning he woke up and asked himself if he is the champ. And his answer was yes.

All seems well in the land of DMD as the #OwenHart Foundation Tournament continues with @jmehytr v #ToniStorm later tonight! Tune in NOW to #AEWDynamite LIVE on @tbsnetwork! pic.twitter.com/w82TwYxJRb

We cut backstage and Tony is with Britt Baker and Jamie Hayter. She says she doesn’t get to prepare for her opponent but she is going to win. She says when storms first come rolling in, they are violent, exciting. But eventually they pass. And tonight, the storm is going to pass.

The bell rings and we are under way. Nese flexes in front of Danhausen as Mark Sterling gets on the ring apron and distracts Danhausen. A right hand by Nese followed by a running knee. He goes for the cover and gets the pin.

Sterling gets on the microphone after the match and tells Nese he didn’t even get an entrance. Nese hits Danhausen with another knee to the face.

Hook walks down to the ring as Nese leave the ring. Danhausen extends his hand and Hook shakes it and the crowd pops.

They play a Dark Side of the Ring parody video talking about Wardlow costing MJF the match against CM Punk, with comments from Taz, Jake Roberts and Barry Horowitz.

Wardlow walks down to the ring in handcuffs surrounded by security. MJF walks down wearing an MJF 55 New York Islanders shirt. The fans cheer MJF as he hugs and celebrates with the fans. He gets in the ring and says to cut his music. He climbs the second rope as the fans chant his name. He says he loves them but unfortunately he has to talk to Wardlow.

He tells Wardlow it’s a tale as old as time. It’s an old underdog story, Biblical almost. David against Goliath. The younger, more humble, way more salt of the earth, Jewish from the Holy land and not Israel but the most magical place in the world. Long Island, New York against the big dumb Wardlow.

MJF says if Wardlow wins at Double or Nothing, he will let him out of his contract. But he will give Wardlow the opportunity to speak to his people. He tells them under no circumstances would he ever want them to stand up and boo Wardlow out of the arena. MJF winks at them. The last thing he wants them to do is to create the loudest boo in the history of professional wrestling. He tells Wardlow the floor is his.

The fans start to boo. He tells Wardlow karma is coming his way for all the things he did to his good friend American rollercoaster Cody Rhodes. He asks if they want him to talk about 2024 but that’s for Tony Kahn.

MJF says he is going to whip Wardlow with his belt not 1, 2, 3, 4, 5, 6, 7, 8, not 9 but Shawn Spears, how many times is he going to whip Wardlow. Spears tells him 10. MJF says he will have to wrestle Shawn Spears in a solid steel cage after that. And this cage match is going to have a special guest referee and his name is Maxwell Jacob Friedman. They talked about what will happen if he wins but what will happen if Wardlow loses.

He tells Wardlow he will never be allowed to sign a contract with AEW forever. MJF tells them to uncuff Wardlow. They uncuff him as he stands up and signs the contract. MJF tells them to put the handcuffs on him. He extends his arms and slams one of the security guards on the table.

Tune in NOW to #AEWDynamite LIVE on TBS! pic.twitter.com/ZlBNoMl5ys

A video package airs with comments from the wrestlers and Samoa Joe vowing to win the Owen tournament.

Jungle Boy with an acrobatic take down followed by a drop kick. Starks rolls to the outside.

Starks to the outside as he grabs the FTW championship. Out comes Swerve Strickland as Starks gets back in the ring. The referee kicks Strickland out of the ring and doesn’t see the count. Jungle Boy is distracted as Starks hits him with Roshambo. He goes for the cover and gets the pin.

Christian Cage and Luchasaurus walk down to the ring. They argue with Strickland and out comes Keith Lee. He and Strickland walk away. Christian is in the ring with Jungle Boy as both men hug.

Chris Jericho says there’s a lot of home town heroes tonight and he is one of them. He was born down the road but he moved away because this place is a dump. He says they did exactly what they said they were going to do. They eliminated Santana, Ortiz and Kingston. They win.

Jericho tells them to stay at home, especially Kingston because Jericho 2:16 says he just burnt his face. And he has to stay home and take care of his wife. She has to feel better and if she doesn’t, she can call him.

He walks through the crowd. Jericho tells him he is giving him one last chance to take another 3 month sabbatical. It’s one of him and five of them. Out come the BCC. Jericho says it’s only four of them and they are five. Santana, Ortiz and Kingston come through the crowd. All 12 men begin to brawl.

Kingston starts choking Jericho, but Hager pulls him away. Regal pulls Jericho away and punches him, and the JAS eventually retreat.

The #AEW Women’s World Championship is officially on the line at #AEWDoN (Double or Nothing)! Champion @ThunderRosa22 faces no. 1 contender @SerenaDeeb LIVE from Vegas, NV on PPV Sunday, May 29th!

Tune in NOW to #AEWDynamite LIVE on TBS! pic.twitter.com/fpz0F3YzOv

They air a video hyping up their women’s title match at Double or Nothing.

The bell rings and we are under way. A drop kick by Storm and Hayter to the outside. Storm throws her back in the ring. Storm on the ring apron but Hayter with a knee to the face and Storm to the outside.

Hayter places Storm on the top rope. Hayter with a suplex. She goes for another suplex but Storm with an inside craddle but Hayter kicks out. Storm with the Storm Zero. She goes for the cover and gets the pin.

Former #AEW World Tag Team Champions, @FrankieKazarian and (current TNT Champ) @ScorpioSky, share a deep history. But this Friday, their paths will collide when the TNT title is put on the line at #AEWRampage!

Tune in NOW to #AEWDynamite LIVE on TBS! pic.twitter.com/DZMP9m3CaL

Scorpio Sky cuts a promo ahead of his TNT title defense against Frankie Kazarian on Rampage.

Frankie Kazarian is interviewed backstage, but is interrupted by Sammy Guevara & Tay Conti. They talk trash to each other and Guevara and Conti walk off.

The bell rings and we are under way. Darby with a drop kick and Jeff falls to the outside. Darby with a suicide dive to the outside of the ring. Darby grabs several chairs from under the ring. He places eight chairs next to each other, four on each side. Jeff lifts him up and slams him onto the ring steps. Jeff goes to throw Darby into the steps but Darby jumps over them. Jeff jumps off the ring steps and onto Darby.

Back from commercial, Darby is on the ladder in the ring with Jeff standing next to the chairs on the outside. Darby with a swanton off the ladder onto Jeff and the chairs. Darby throws Jeff back into the ring. Darby climbs the top rope but Jeff rolls onto the ring apron. Darby with the Coffin Drop but Jeff moves out of the way and Darby hits the ring apron. With the ring steps placed on its side, Jeff places Darby on the ring steps. Jeff climbs the top rope, he goes for the swanton but Darby moves out of the way and Jeff lands on the steel steps.

Darby throws Jeff back into the ring. He climbs the top rope and hits him with the Coffin Drop. He goes for the cover but Jeff reverses it into a cover and gets the pin.

Both men shake hands after the match.

The Young Bucks and the Undisputed Elite stand on the ramp and look at Matt and Jeff.