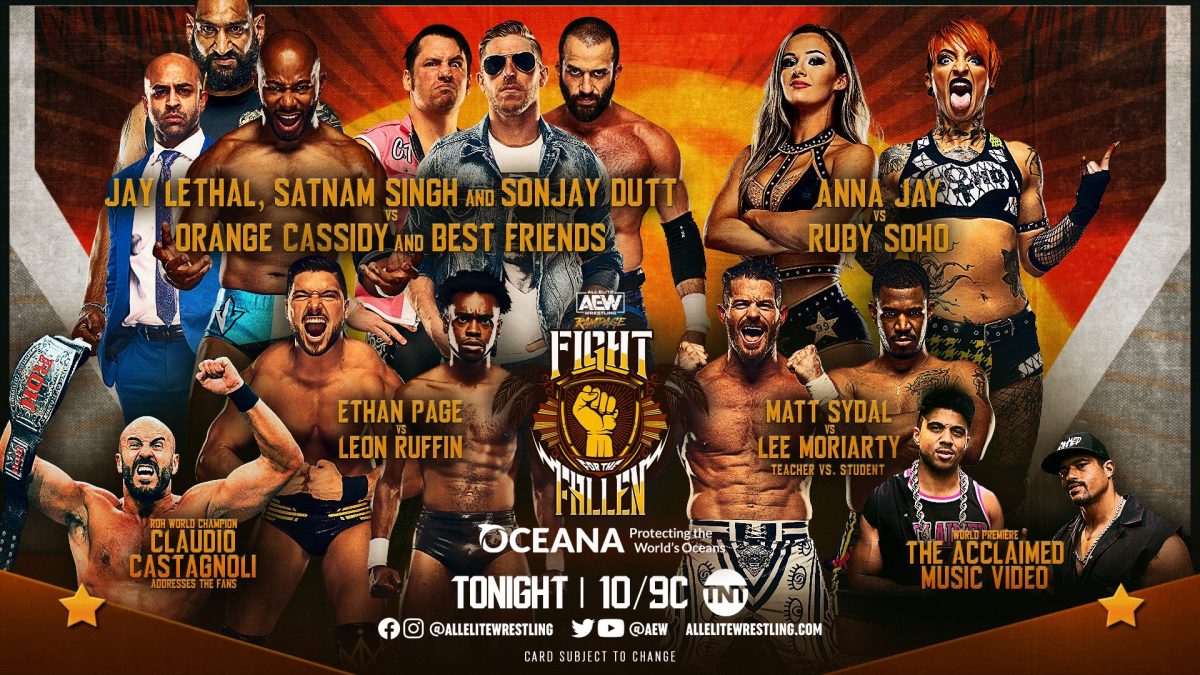 Trent Baretta starts with Jay Lethal and Lethal goes for a back slide right off the bat and Trent counters for a two count. Jay complains about Trent and asks for Orange Cassidy to be tagged in. Cassidy stops Lethal and calls in Satnam. Instead Sonjay Dutt tags in, dressed in a suit with a pencil behind his ear. He takes off his blazer and tie. Cassidy puts his sunglasses on the referee.

Cassidy hits pockets and soft kicks, and Sonjay tags in Satnam. Satnam picks up Cassidy and then drops him in the corner. The Best Friends come in and attack and Satnam cross bodies both of them. Lethal tags in and stomps down Cassidy as we go picture in picture.

When we return to full screen, Lethal tosses Cassidy into the corner and he goes up and over and when he comes in, he and Lethal trade waistlock go behinds. Cassidy is able to escape and leaps over Lethal and then strolls to his corner for the tag. Chuck Taylor tags in and hits a series of clotheslines on Lethal, and then a suplex onto Lethal. Chuck leaps at Lethal, who dodges, but it allows Trent to tag in.

They hit Soul Food, and Satnam interrupts the hug. The Best Friends are able to drop Satnam out and they get the hug. Lethal hits the Lethal Injection on both of them. Cassidy tags in and hits a diving crossbody and the spinning DDT. Sonjay starts to come in with a pencil and Cassidy stops him. Sonjay hits soft kicks and Cassidy breaks the pencil and then drops Sonjay with an Orange Punch for the pin.

Satnam is able to take everyone out and holds Cassidy for Lethal to hit the Lethal Injection. They start beating down Cassidy, but Wardlow storms to the ring. He stands in the ring and calls them out, and Sonjay and Satnam hold back Lethal and they leave the ring.

We get a video package about the FTR vs Briscos from Ring of Honor’s Death Before Dishonor.

Ruffin goes for a charge, but Page is able to catch him and starts beating him down in the corner. Page then hits a shoulder tackle on Ruffin. He tosses Ruffin into the corner hard. Page charades, and Ruffin dodges. He tries to escape, but Page grabs him and hits a brutal forearm. Stokely Hathaway and Leila Gray are watching backstage. Page then drops Ruffin again with an Ego’s Edge and covers for a three count.

In the back, Lexi is with Cole Karter. She asks him about his win on Dark, and QT Marshall and his crew come in and talk about how he is hanging around with the wrong crowd. He asks him to join the Factory. He tells him to sleep on it, but in his own bed, not with the fishes.

Lee mocks Sydal with a peace sign. Matt offers a handshake and Lee takes it and head butts Sydal. He then dances around the ring and hits a front chancery suplex. Lee goes for a clothesline, and Sydal dodges it. Sydal hits a leaping knee and a knee strike into a two count. They keep fighting as we go picture in picture.

When we return to full screen, Syadal whips Lee across the ring and then as Sydal tries a hurricanrana on Lee, he rolls through for a two count. Sydal hits a roundhouse kick. Lee retaliates with a lariat as they trade standing arm trapping holds. Lee starts with a series of knee strikes. Lee hits a question mark kick and hits the lightning april for a two count.

Stokely Hathaway comes out to ringside.

Sydal and Lee fight on the top and Lee drops to the mat. Stokely gets on the apron and tries to grab Sydal’s leg. Lee gets a leaping kick while Sydal is distracted. Sydal drops to the mat and Lee grabs him and hits a side slam and covers for as two count. Lee hits a series of elbows and then puts on the Border City Stretch, and Sydal has to tap out.

Lee keeps the stretch on until Stokely calls him off. Stokely gets in the ring and Lee takes the card this time.

Next week’s forecast next calls for a #ThunderStorm 🌩 & Dr. @realbrittbaker has some words to say about that of her own.

Britt Baker is backstage with Rebel. She talks at Thunder Rosa saying her title is in danger. She then tells Toni Storm that she should want that title instead of helping Rosa.

In the ring, Tony Schiavone calls for Claudio Castagnoli to come out and talk about being the Ring of Honor world champion. William Regal comes to the ring with him. Claudio waits for the crowd chants of You Deserve It to die down and then says thank you in a bunch of different languages. He says the fans never let him down. It feels amazing to be a champion.

He then brings out Wheeler Yuta. Before he can speak, Jericho interrupts saying that he is sick of this crap and a sports entertainer beats a pro wrestler every time, but Yuta tells him to shut up because he beat Daniel Garcia.

Yuta then says he is pretty sure he can beat Jericho too. Jericho is incredulous. Yuta says he sounds scared because he knows he can beat him. Both Claudio and William Regal agree. Jericho throws a fit and says they can fight on Dynamite. Yuta says “Nah.”

Jericho keeps ranting and says that he will put up his title match. Yuta says “That was easier than I thought…you’re on!”

The Acclaimed have their music video in which they announce the stipulation in their match with the Ass Boys is Dumpster Match.

Battle of the Belts Match

Hot off his first singles World Title win at #DeathBeforeDishonor, newly crowned @ringofhonor World Champion @ClaudioCSRO puts the title on the line for the first time ever, against rising Japanese star @takesoup at #AEWBattleOfTheBelts III on Saturday August 6 at 8/7c on TNT! pic.twitter.com/QLtENBq1w2

We have Ruby Soho and Anna Jay to have their time with Mark Henry and Anna says now she doesn’t have to pretend to be her friend. Ruby says that Anna is just another entitle little $#!t and face her one on one.

Ruby gets a series of chops and when Anna goes for a kick, Ruby catches it and is able to get a knee strike on Anna. Ruby is able to get a back elbow in the corner and grabs Anna’s head with her feet while in the corner. Anna is able to stop her and then kicks Roby in the midsection, dropping her to the mat. Anna walks away as if she’s a 90’s action star walking away from an explosion.

Anna rolls in for another kick and mugs for the crowd as we fgo picture in picture.

When we return to full screen, Anna has been working Ruby’s injured hand through the break. Anna has removed ther cast on Runy’s hand. She goes to choke Ruby with the cast and the Ref takes it away from her. Anna hits a thrust kick. Ruby is able to get a suplex but her hand stops her attack. Anna is able to twist Ruby’s hand and keeps knocking her down and holding the wrist. Ruby tries to break it with head butts, and then gets a series of quick kicks. Ruby knees Anna’s midsection and then hits a back heel trip for a two count.

Ruby tries for Destination Unknown, but Anna is able to reverse it and drop Ruby for a pair of two counts. Anna starts screaming at the crowd, and Anna gets the Queenslayer. Ruby escapes and gets the No Future for a two count. Ruby goes to the top after telling Anna she made the wrong choice. Ruby tries for a senton, and Anna dodges it and hits a series of seated cross faces on Ruby. AAnna is able to lock in the Queenslayer and instead gives up and tosses her wrist braces across the ring. The ref clears them out. This allows Anna to grab Ruby’s wrist brace for a Queenslayer choke with it. Ruby passes out.