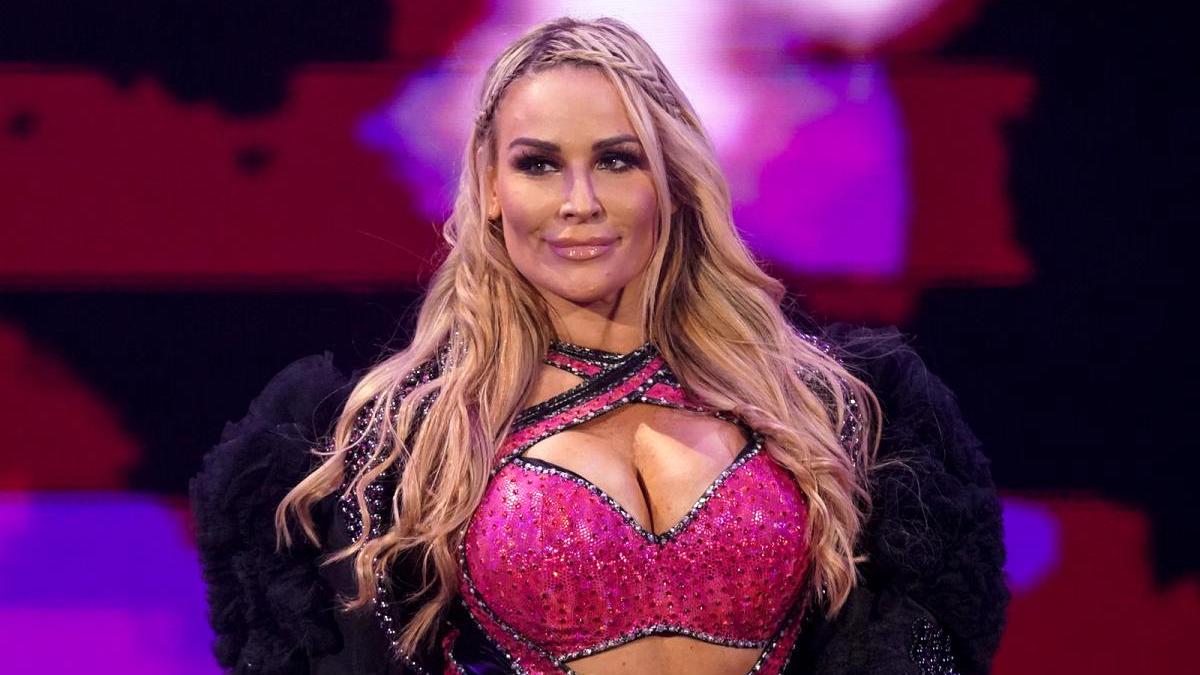 Ariel Helwani held a recent interview with Natalya for BT Sport. One of the topics discussed included her thoughts about AEW’s efforts honoring Owen Hart and her respect for Martha Hart.

“I’m so glad that you asked that [what she thought about the AEW Owen Hart Foundation tournament and seeing Martha Hart back in a pro wrestling setting] because I’ve been — it’s been so hard because I work for WWE, but I have a tremendous amount of respect for Martha. I really do. I think that she did such a beautiful job. She carries herself so well. She was so poised. It was the first time that fans really got the chance to see her and I thought she really — she just held herself so well and her kids just seem like such nice kids. I do speak, you know, message, communicate with her son Oje every so often and she just — she held herself so well. I thought they did a really nice job honoring Owen and that’s the way Martha wanted to honor him and I respect that so much because nobody can understand or imagine what she went through. I always try to put myself — no matter what — I always, always try to put myself in her shoes when that incident happened. What would it be like if I got that phone call about T.J. [Wilson]? What would it be like trying to explain to my little children that they’re not gonna have a dad again? You know, so it’s like, I totally, totally understand why any way she feels. I think she’s totally justified. Not everybody has to agree with it but, I do respect her and I think that she did a beautiful job and I think they did a really nice job honoring him the way she wanted him honored and that was her call and it always should be her call.”

Natalya also gave her thoughts about the future of her wrestling career.

“I just wanna do it until the wheels fall off.

Here’s my thing, knock on wood, I’m extremely durable and it doesn’t mean injuries won’t happen, they do, it’s life. Whether you wrestle or not, injuries happen. For me, I feel like I just — my body feels so good. I feel like I wake up every day and I know this is crazy for a pro wrestler but I wake up every day virtually pain-free. I don’t know if that’s because of my dad’s genetics. My dad was just like a superhuman as far as being strong, strong bones, strong tendons, super genetics. I wake up and I feel really, really good. I’m like, I don’t have knee pain, I don’t have shoulder pain, I don’t have neck pain. I feel ridiculously good for a girl that’s had the most professional wrestling matches of any woman in the history of the entire industry. Not just in WWE. There’s no woman that has had as many matches as me, no one. So, that’s why I have the most wins, that’s why I have the most losses, that’s why I have the most pay-per-view matches, that’s why I have the most WrestleMania matches, the most Money in the Bank matches because I’ve just been super, super consistent. I take really, really good care of myself but, I will not do it anymore if it’s not fun. So the second that it stops being fun consistently where I’m just not enjoying myself, I feel like, you know, that’s when you’ll know and I feel like you gotta trust the signs of the universe. I don’t wanna be somebody that’s wrestling when their body is broken or not able to move or not able to be the Nattie that people would expect. But I always feel like wrestling’s like hotel California. You can check out any time you want, but you can never leave. It never leaves you.”

Bleacher Report held a recent interview with The Undertaker. One of the topics discussed included Undertaker revealing that his “never say never” line about a potential future return to wrestling during his WWE Hall of Fame speech was only meant to leave a little doubt in Vince McMahon’s mind.

I thought it was a great button that I can put on that and for that very reason. That was a little bit for Vince, too.”

Undertaker also gave his thoughts about the criticisms he received for not mentioning Mick Foley and the impact he had towards his career during his Hall of Fame speech.

“I delivered the speech and I got everything out there that I wanted to say. I got a little bit of blowback for not mentioning a couple of people, but it wasn’t about…If I go through every angle, every opponent…It was more about those three pillars I referenced back when I’m talking about Shawn [Michaels], that had a direct meaning to never being content. That’s why I talked so much about Shawn then, Triple H. I did get a little bit of, ‘I can’t believe you didn’t mention Mick Foley.’ I’ve talked about Mick Foley until I’m blue in the gills.

I love Mick Foley. I think what we did will outlive the test of time as far as our angle. But then I can talk about Edge and so on. I haven’t talked to any of those guys. I hope they didn’t get their feelings hurt, but it wasn’t about all that. It was about my journey and the things I’ve learned through those 30-plus years that I was trying to share and help people in their lives and thank the WWE Universe. That’s what it was all about. If anyone was offended, I’m sorry.”

As noted before, Allison Danger, real name Cathy Corino, was released by WWE this past January as part of a larger batch of releases for their Performance Center.

A recent episode of The Sessions with Renee Paquette podcast had Danger as the guest. One of the topics discussed included Danger’s thoughts about her release from WWE.

“It came out of nowhere for all of us. Some of the coaches who got let go were still in the Performance Center working with people. We got it right at the end of open ring. We have scheduled classes and then open ring where people can come and meet with coaches. I normally did a lot of the open rings with (Timothy) Thatcher, (Danny) Burch, (Ace) Steele. For me, the more I could be there, the better. I had slipped out after the first open ring. I talked to Burch and was like, ‘I hate leaving early. It’s my kid’s first day at this brand new school in Orlando.’ They had never rode the bus before because KG [her child] went to a charter school in Vegas. Never rode the bus, I’m nervous they are going to get off in the wrong neighborhood. I was like, ‘Do we have enough coaches?’ ‘Yeah, we have enough coaches to get by, just go take care of your kid.’ I was picking KG up and we were going to have a special dinner to celebrate the first day of a new school. The phone rings, ‘Hey coach, where are you?’ ‘I just got my kid at the bus stop, do you need me to come back to the ring? I can be back in 20 (minutes).’ ‘No, we’re calling with bad news.’ ‘Is everything okay?’ ‘We just got word that they are going to restructure the Performance Center and we have to let go of eight of you. Unfortunately, they’re not going to let us continue with your contract.

At that point, my kid is getting in the car. I feel bad for the person who called me because, it was not his fault, it was bad timing. I’m glad the person who called me was the one who called me because I think the world of him and respect him. I just froze. ‘You have to get rid of eight coaches, is my brother safe? You have to tell me, are you going to fire my brother?’ ‘No’ ‘You wouldn’t lie to me?’ ‘We’re literally releasing you and you’re asking about Steve.’ ‘What am I going to do? I can’t negotiate anything, I just need to know if he’s going to okay.’ That was my initial fear. I get off the phone, I call my husband, and he goes, ‘What’s wrong?’ ‘I just got released. They said it wasn’t my fault, there is nothing I did wrong.’ I had gotten a text a couple days before about how we were all doing a great job and how happy they were with the current roster. I was told if they could bring me back they would, in a heartbeat, to make sure I knew it wasn’t a reflection on me, it was a change from the higher-ups going, ‘we’re going to restructure.

I was numb, then I cried, I was numb, then I cried, and I went, ‘what am I going to do now? Could you have not fired me a week before so I could have packed my kid up, moved up with my husband, and followed up if possible?’ It’s their first day at school, how do I rip my kid out of this? My kid has gone through a pandemic where they didn’t go to school and didn’t see their friends for two years. They finally get back to school and it’s, ‘we’re moving to the east coast for sure,’ so now I’m ripping them out of school, they get put online, and have to struggle with being online, at home, in a new place in Florida where they have no friends and mom and dad are working these hours. Finally, everything is settled, Christmas got canceled because I got COVID from the December tryouts. Our first Christmas, all apart, my husband is making it down and literally, he walked in, in a mask, we watched [KG] unwrap presents, and he went straight to the airport and flew back. Then I’m back to work in three days. That’s it. I feel like I got brought to Florida and left to die. My family is split, we’re struggling through that. I’m still five months out and nothing to show for it and no idea what I’m going to do. This has been a rock bottom year.

That’s where the mindfuck comes in because there hasn’t been phone calls. I feel everybody landed on their feet but me, to the point where I’m like, ‘is the universe telling me this is it, I’m done?’ I chase the dream, I got it for three months, and I’m financially devastated, I’m emotionally, ‘what am I doing?’ Is this it for me? I have no idea what the future holds. If I weren’t a mom, it wouldn’t be so bad. What happens to me, happens to my kid. That’s the part that is the dagger.”