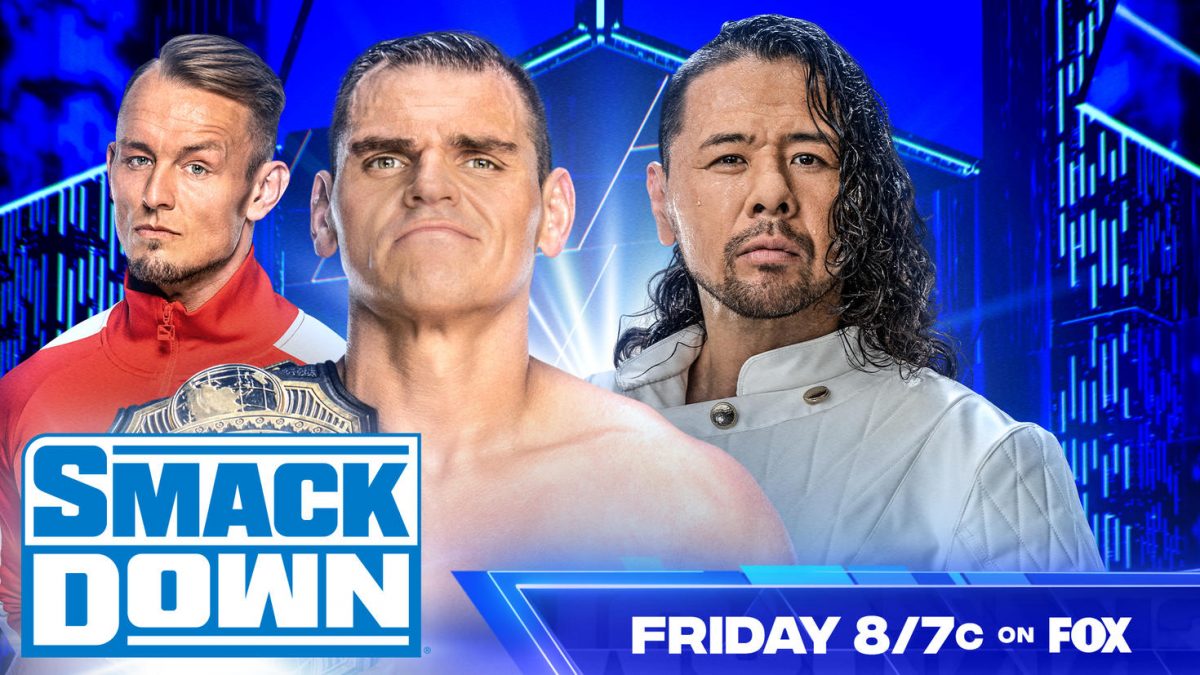 The bell rings and we are under way. Shotzi and Raquel are in the ring. Shotzi with a kick to the side of the head. She grabs Raquel by the head and climbs the top rope. Shotzi wraps her legs around Raquel’s shoulders and rolls her up but Raquel kicks out. Shotzi runs to the ropes but Raquel catches her and throws her across the ring.

Karrion Kross and Scarlett are backstage. He says in the middle of chaos, opportunity appears. And last week, that’s what happened. The rebirth of the darkened soul. He says Drew and Roman are the chosen ones. Them, they are cast out of paradise, to be forgotten. But they never forgot. They are prepared and they waited for the perfect time to strike. Everyone knows about the bloodline, now they will show them the new timeline. Because in the end, everybody pays the toll.

Drew McIntyre is shown walking backstage to the ring as Kross looks at him from behind. Out comes Drew to the ring.

McIntyre is in the ring. He says it’s an exciting time in WWE, there’s a lot of new faces showing up. Drew McIntyre was jumped from behind by Kross last week. He says a lot of people think he will talk about the horrible things he will do to him but he gets it. He has been waiting for a year and what better opportunity than to attack the number one contender and stare down the champion.

The problem is that the number one contender is Drew. He says his hands are a little full but they will play a little game. He can pick between a knockout, the hospital or the graveyard. He says Roman Reigns is not there tonight. He tells Roman that the last two matches with Brock Lesnar, it took him, his family, weapons and sacrificing the wise man to get the job done against Lesnar. But the man he is facing, Drew McIntyre, walked into WrestleMania in the main event and beat Lesnar with his own hands. Drew says the island of relevancy is not a real place.

Karrion’s music hits and out comes Scarlett as she stands on stage. She gets onto the ring steps and The Usos attack Drew from behind. Drew fights back but Jey Uso hits Drew with the super kick. They send him to the ropes and it’s the 1D on McIntyre. Scarlett is standing on the ring apron. Jey tells her to tell Kross that if he stands up to the tribal chief, they will put him down. This is bloodline territory. She tells them that is funny because Kross has the same message to them.

The Viking Raiders are walking down to the ring and Kofi hits them both with a kendo stick. Ivar throws the shield onto Kofi as they double team him on stage. Erik lifts Kofi up and throws him onto a shield. Erik drags Kofi across the stage. Ivar on top of the barricade and he hits Kofi with a splash.

B-Fab gets on the microphone and she introduces herself. Top Dolla begins to rap and Adonis introduces himself. B-Fab says they are Hit Row, the OG3 and if you don’t know, now you know.

Gunther and Ludwig Kaiser are backstage and in comes Kayla. Gunther tells Kayla to tell Shinsuke Nakamura that he will suffer at the hands of the ring general.

With a table and two chairs set up for the WWE SmackDown Women’s Championship contract signing, Ronda Rousey walks through the crowd carrying a black bag. She gets in the ring and says she is not supposed to be there as she is suspended for what she did at SummerSlam. She says she was also fined a lot of money. She doubled team. She empties the bag and money falls out of it. She says being the baddest gets expensive but she can afford it.

Out comes security and WWE officials. Ronda says she was just about to leave. She gets out of the ring and flips a security guard. She starts to walk out as she argues with a security guard. Out comes Shayna Baszler who tells Ronda she can’t do that. She has to play by the rules. Ronda tells Shayna she used to be a killer.

Shayna gets into the ring. She says last week, she won the gauntlet match against the entire SmackDown women’s locker room. Liv just happens to be the next one on the list and Liv will be the next one to fall. Shayna signs the contract and tells Liv that she has a pretty good target with her injured arm. She calls Liv out to the ring and says she cannot wait for Cardiff. She says she will rip her limb from limb or she will put her to sleep.

Out comes Liv Morgan. She gets in the ring. Liv tells Shayna she won’t beat her. Shayna is like a bootleg Ronda Rousey. And she knows that because she beat the real deal twice and at Cardiff she is going to beat her too. Liv signs the contract. Shayna grabs Liv’s injured left arm and slams it on the table. Shayna twists Liv’s arm and steps on it.

Shayna lifts Liv up but Liv jumps off the top rope and hits Shayna with a bulldog through the table.

Zayn is backstage and in come The Usos. They ask Zayn where he ran. Zayn says he was going to get security. Jey tells him enough with the excuses and like he told him last week, if he doesn’t step up, he will be put aside. Jey tells Jimmy to go to the ring and call out Drew.

Out comes Madcap Moss to the ring. A right hand by Madcap onto Jey. A fall away slam onto Jimmy. Madcap and Drew are face to face and they double clothesline the Usos.

Back from commercial, Jey goes for the super kick on Madcap but Madcap picks Jey up and slams him onto the mat. Jimmy is tagged in and as is Drew. He throws Jimmy across the ring. In comes Jey and a neck breaker by Drew. A neck breaker onto Jimmy. In comes Zayn into the ring. He distracts Drew and Jimmy hits Drew with a super kick. Jey is tagged in and he hits Drew with a splash off the top rope. He goes for the cover but Drew kicks out. Jimmy is tagged into the match. Madcap pulls Jey to the outside of the ring and he throws him into the barricade. Madcap goes for a clothesline but Jey moves out of the way. Jey with a clothesline over the barricade. In the ring, Drew with the Claymore onto Jimmy. He goes for the cover and gets the pin.

Maximum Male Models are backstage doing a photoshoot. In come Los Lotharios who tell Max Dupri that he should hire them since they are the most handsome tag teams in WWE. Max tells them that they are not MMM material. They tell Max that they were not talking to him but to Maxxine.

Kayla is backstage with Ricochet. We see a clip of Ricochet’s match against Happy Corbin from last week where Ricochet got the win. Ricochet says he is more locked in now than he has been in a long time. He says he is ready for anything and it doesn’t matter if it’s Shinsuke Nakamura or Gunther because after tonight, he will be waiting in line. Corbin attacks Ricochet and tells him if he thought they were done, they are just getting started.