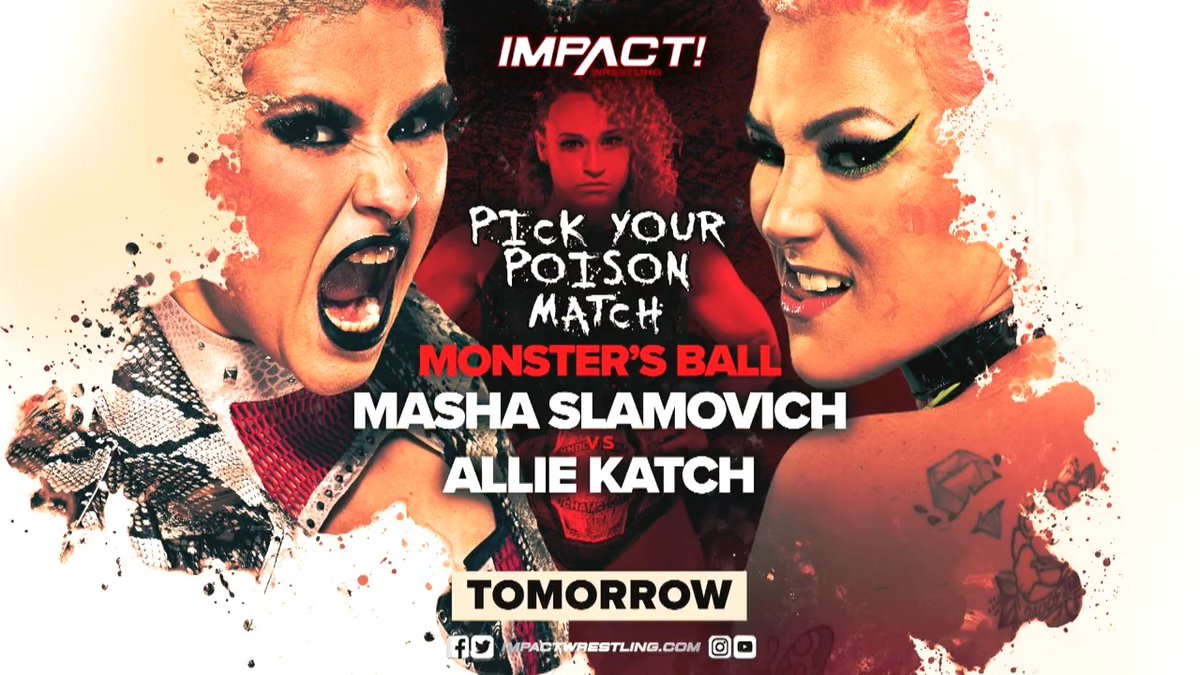 The young guns of the Bullet Club look to continue their momentum against the team of Trey Miguel and Laredo Kid. Austin gets sent to the outside but just as Kid is about to fly, Bey cuts him off. Austin capitalizes off the distraction with a back suplex. Bey hits a double foot stomp to the back of Kid for two. Kid creates separation with a Hurricanrana to Bey, then makes the tag to Miguel. The pace quickens as Miguel explodes into the match with a flurry of offense. Bey gets two for one as he takes out both of his opponents with a flatliner neckbreaker combo. Austin almost puts Kid away with a springboard kick. Bey attempts The Art of Finesse on Kid but Miguel saves his partner. Kid dives through the ropes, taking out Austin on the floor. Kid and Miguel hit a springboard sunset flip powerbomb on Bey but it’s not enough. Kid gets dumped to the outside as Miguel gets caught with The Art of Finesse, followed by The Fold for three.

Bhupinder Gujjar tells Gia Miler that he suffered a broken nose in last week’s Ladder match for the Digital Media Title. Gujjar says that he got a taste for gold and he wants more. Gujjar reveals that he is entering the this year’s Call Your Shot Gauntlet at Bound For Glory, in which the winner earns a title shot of their choosing, any time, any place!

Gia Miller interviews Frankie Kazarian, who will challenge Mike Bailey for the X-Division Title at Bound For Glory. Kazarian says that the reason he competed in the Triple Threat Revolver at Victory Road was to prove that he could still hang with this crop of X-Division stars. Kazarian admits that he’s a fan of Bailey but sends a warning that Bailey is playing a game that he created.

An unknown individual wearing a yellow hoodie tries to jump the guardrail behind Tom Hannifan and Matthew Rehwoldt.

Masha Slamovich and Allie Katch have been locked away in a room with no food, no water and no light in advance of their Monster’s Ball match tonight!

Brian Myers puts the Digital Media Title on the line against the unpredictable Crazzy Steve! It doesn’t take long before Steve tries to bite Myers. Luckily for Myers, he quickly counters and hangs up Steve on the top rope. Steve builds momentum with a series of strikes, followed by a cannonball in the corner. Myers hits an Enzuigiri, then connects with the Implant DDT for two. Steve successfully bites Myers and does some serious damage with the Upside Down. Myers distracts the referee, allowing him to deliver a thumb to the eye of Steve. Myers follows up with the Roster Cut clothesline to win.

After the match, Myers gets on the mic and says that in the last three months, he has made the Digital Media Title the most prestigious title in IMPACT Wrestling. Myers lays out an open challenge for Bound For Glory, daring someone to step up to the “Most Professional Wrestler”!

Say his name and he appears – Joe Hendry is coming soon to IMPACT Wrestling!

Rosemary tries to enlist the help of Father James Mitchell to restore Jessicka to her former self, the destructive powerhouse known as Havok. Jessicka and Taya Valkyrie overhear Rosemary’s plea and convince her that Jessicka is here to stay. Rosemary says that Jessicka and Taya have a lot of work to do if they want to dethrone VXT for the Knockouts World Tag Team Titles at Bound For Glory.

Black Taurus locks horns with Ring of Honor standout Delirious! The bell rings and Delirious charges towards Taurus with a burst of speed. Taurus takes him of his feet with a shoulder tackle, followed by a powerslam moments later. Delirious hits the ropes and continuously changes direction to keep Taurus guessing. Delirious hits ten running leg drops but Taurus wisely retreats to the outside. Taurus turns the tide with a pop-up Samoan Drop but Taurus quickly regains control. Taurus spikes him wtih Destination Hellhole to win!

After making his shocking IMPACT debut at Victory Road, Bobby Fish tells Gia Miller that he’s here in IMPACT Wrestling to pick a fight. Fish sets his sights on the IMPACT World Title and reveals that he’s entering the Call Your Shot Gauntlet at Bound For Glory in an attempt to earn a golden opportunity.

.@MiaYim and @MickieJames go WAY BACK! And there's footage but OFCORSE @GiseleShaw08 just HAD to steal the spotlight again! #IMPACTonAXSTV pic.twitter.com/fXs9SBRFNY

Mia Yim admits that she was hesitant to accept Mickie James’ challenge for a match at Bound For Glory. After all, Mickie’s next loss will be her last. Yim shows footage of a match against James from early in her career and says that she has too much respect to take it easy on her at Bound For Glory. Gisele Shaw, who fell to James at Victory Road, claims that Yim doesn’t have what it takes to beat her. A confident Yim challenges Shaw to a “warm-up” next Thursday on IMPACT.

Eddie Edwards, IMPACT World Tag Team Champions Matt Taven and Mike Bennett, Maria Kanellis, Kenny King, PCO and Vincent are in the ring to celebrate their success at Victory Road. Edwards gets on the mic and says that not only did Honor No More prove what they are capable of, but he proved that he could beat IMPACT World Champion Josh Alexander when he pinned him in their six-man tag team match. However, Edwards admits that the group still suffered a setback and places blame on PCO for failing to soften up the Motor City Machine Guns ahead of their IMPACT World Tag Team Title shot at Bound For Glory. Edwards accuses PCO of stepping up when he’s not supposed to and demands that he obeys his orders. Vincent places a bag over the head of PCO in an attempt to calm him down. The celebration continues as Maria Kanellis repeatedly shows the clip of Edwards pinning Alexander, something that nobody has been able to do since Moose defeated him for the IMPACT World Title last year at Bound For Glory. Kanellis says that Edwards’ victory is even more impressive because he was able to do it clean, unlike Moose who “called his shot” after Alexander already competed in a match.

Speaking of the champ, Alexander interrupts and says that each member of Honor No More is afraid of being overlooked and insignificant again. Alexander calls his match with Edwards just another fight and the only difference is how they view the prize, the IMPACT World Title. Edwards views it as job security and Alexander views it as a symbol of the best wrestler on earth. Edwards claims that in eight days, Alexander will regret his decision to not join Honor No More in their war against IMPACT Wrestling. Edwards says that not only does he have momentum heading into Bound For Glory, but he will enter the biggest event of the year with his Honor No More family by his side. Alexander fires back, stating that while it may look like he’s at a numbers disadvantage, he fights with the IMPACT fans by his side and that makes Edwards the only one that’s outnumbered. Alexander hits the ring and a brawl breaks out. Alexander quickly falls victim to the numbers game when Rich Swann and Heath attempt to make the save. The tide once again shifts in Honor No More’s favor as the Motor City Machine Guns even the odds. Alexander and Edwards go face to face but Edwards retreats to the outside.

The fight continues as PCO and Vincent battle Rich Swann and Heath in their scheduled tag team matchup! PCO hits a Codebreaker out of the corner, followed by a draping DDT to Swann. PCO soars with a leg drop off the second rope. Swann uses his quickness to create separation with an Enzuigiri to Vincent. Swann makes the tag to Heath as he goes on the attack. Heath hits Vincent with a powerslam for two. Heath attempts the Wake Up Call but PCO protects his partner from the apron. PCO is sent over the top as his hand gets caught in the ropes. Swann hits the Phoenix Splash on Vincent to score the victory.

Days removed from the brutal Barbed Wire Massacre match between Moose, Steve Maclin and Sami Callihan, Moose finally admits to Gia Miller that he and Maclin made a deal. Moose agreed to help Maclin in the Call Your Shot gauntlet for every time Maclin helped him with Sami Callihan. Moose says that the deal is out the window following Maclin’s win at Victory Road and that it’s going to be every man for himself at Bound For Glory. Maclin attacks Moose and the fight is on once again!

IMPACT Executive Vice President Scott D’Amore tells security to ensure that Moose and Maclin don’t cause any more trouble tonight. Sami Callihan wants another match with them but D’Amore says that he’s not cleared to compete until Bound For Glory due to a broken orbital bone. D’Amore instead makes a singles match for next week, Moose vs Maclin with Callihan as the special referee!

.@mashaslamovich WINS MONSTERS BALL! Could we be looking at our NEW Knockouts World Champion come #BoundForGlory?!

Tickets to #BoundForGlory in Albany, NY on October 7th are ON-SALE NOW!

Just eight nights before their Knockouts World Title showdown, Jordynne Grace handpicks the opponent for Masha Slamovich in Monster’s Ball – Allie Katch! After being locked in a room for 24 hours with no food, no water and no light, Slamovich and Katch are unleashed in this match with no disqualifications and no count outs. Katch gains the early advantage with a trash can lid assault. Slamovich turns it around with a German suplex, then chokes Katch with a steel chain. Slamovich hits an Air Raid Crash into the corner turnbuckles. During the break, Katch sends her into the steel steps, then busts her open with the sharp edge of a soda can. Slamovich fights back with a suplex on the exposed ramp. Back in the ring, Slamovich hits a snap suplex onto a chair. Moments later, Slamovich kicks her in the back of the head, then connects with a Death Valley Driver into another chair. Katch kicks out and sends Slamovich through a door with her own Death Valley Driver. Both Knockouts are sent flying off the apron, through a table on the floor. Slamovich empties a back of thumbtacks on the mat. Katch piledrives her into the tacks but somehow, someway, Slamovich kicks out at two. Cut soda cans are added to the pile of thumbtacks as Slamovich hits the Snowplow to win!

Slamovich celebrates her victory as IMPACT! goes off the air.