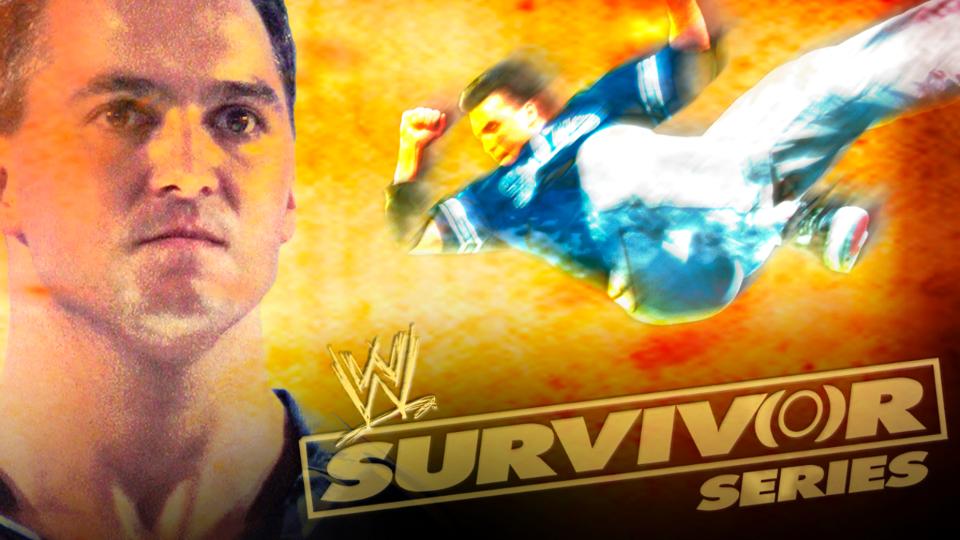 Team Angle vs. Team Lesnar
Highlights: Hardcore Holly is DQed right off the bat from this match, then goes A-Train & Bradshaw quickly. Not a bad match, Angle was eliminated early, Brock tapped out to Benoit, and it came down to Cena & Benoit vs. Big Show. Cena hits Big Show with the chain, then hits the F-U on Big Show for the win.
Winners: Benoit & Cena for Team Angle

After the Team Angle/Lesnar match, Vince walks up to Shane saying it’s weird that father & son have two matches against brothers, Taker & Kane. Vince then walks into Austin backstage, and the two stare each other down then start laughing and walk off.

Molly Holly vs. Lita
Highlights: A decent match here. Both women poured their hearts out in this one, and no I don’t mean it that way folks. Molly ended the match by exposing the middle turnbuckle, and hitting Lita with a drop toe hold causing her to be knocked out and Molly to pick up the pin.
Winner: Molly Holly

After the Team Angle/Lesnar match, Vince walks up to Shane saying it’s weird that father & son have two matches against brothers, Taker & Kane. Vince then walks into Austin backstage, and the two stare each other down then start laughing and walk off.

Kane vs. Shane McMahon
Highlights: A hellacious match for Kane & Shane, however it was nothing like their brawl at Unforgiven. Shane immediately jumps Kane at the beginning, puts him on the spanish announce table and hits an elbow drop from the top rope to the outside. Shane taunts Kane to the backstage area, where he runs him over with a car, then Kane gets back up and drags Shane back to the ringside area. Kane & Shane exchange shots, and whips into the ambulance. Shane hits a Van Terminator from the top of the ambulance, then after a few more blows, Kane gets back up and hits the tombstone and shoves Shane into the ambulance for the win.
Winner: Kane

Backstage Lesnar is being interviewed, and Goldberg comes up and greets Lesnar saying he’s the RAW Champ. Odd seeing both brand world champs face to face!

A segment that went a bit too long occured with Coach interviewing the owner of the Dallas Mavericks, then Bischoff comes out and says he rented the arena tonight, and he wants to toss the Mavericks owner out of the building.

Basham Brothers vs. Los Guerreros
Highlights: Not a bad tag team match, lots of quick action in this match. A great spot by Chavo in the match, when Chavo was going to be tossed in the air, he hit a dropkick on a Basham. The end of the match happened when Chavo accidently kicked Eddie, and was rolled up into a pin.
Winners: Basham Brothers

Team Austin vs. Team Bischoff
Highlights: What an unbelieveable match. Great spots in this match, especially when D-Von, Bubba Ray & RVD dogpiled on Mark Henry to pin the man. The match started to slow down when it was Bubba Ray & HBK against Christian, Orton, and Jericho. Bubba Ray then was eliminated, leaving HBK alone. HBK took out Christian & Jericho on his own, then the ref was knocked out. Bischoff hits HBK with a kick, Austin takes Bischoff out and gives Orton the stunner. Austin & Bischoff fight down the aisleway to the stage, Batista runs in the ring and powerbombs HBK and Orton picks up the pin.
Winner: Randy Orton for Team Bischoff

After the Bischoff/Austin match, Austin comes back out and says he started his career there in Dallas, TX back in 1989 and now it’s ended in Dallas, TX. Austin says it’s been a hell of a damn right, and he appreciates everything the fans have done for him. Austin then says he “loves the shit out of the fans”. Coach then comes out and sings the “Goodbye” song. Coach brings out a shit load of cops too. Austin beats the living hell out of the cops & coach, then he stomps a mudhole in Coach in the ring after he’s all alone. STUNNER! AUSTIN HITS THE STUNNER ON COACH! DIE f***ER, DIE!

Vince McMahon vs. Undertaker
Highlights: A gruesome match to say the least here. Vince is busted wide open ASAP in this match, Taker beats the living hell out of him, Vince has no chance in hell! Taker hits Vince harshly with a shovel shot so hard, El Paso heard it! Taker takes Vince to the grave site, and an explosion takes place and Taker is down. Kane comes out and tosses Taker into the grave, and pulls out Vince. Kane poses above the grave, and Vince drops the dirt from the bulldozer on the grave for the win.
Winner: Vince McMahon

Goldberg vs. Triple H
Highlights: What an amazing match, I can’t believe it. Way better than the first one of these two. Goldberg had the advantage on the start, but Triple H found a weakness on Goldberg through his leg. Triple H worked on the leg during the rest of the match. Triple H hits Goldberg with brass knuckles when the ref is down, Goldberg gets his shoulder up. Triple H hits the ref with an elbow drop, but Goldberg gets up somehow and takes Triple H & Flair down. Orton & Batista rush to the ring, but get taken down. Goldberg hits the spear, then the Jackhammer after Triple H’s failed attempt of using a sledgehammer (might’ve been the same one from f***in’ 1999!).
Winner: Goldberg

Overall it was a superb show in my opinion. I was shocked to see Goldberg get another win over Triple H, but that makes me happy. I highly suggest for you to get the replay of Survivor Series, it was well worth the $35!