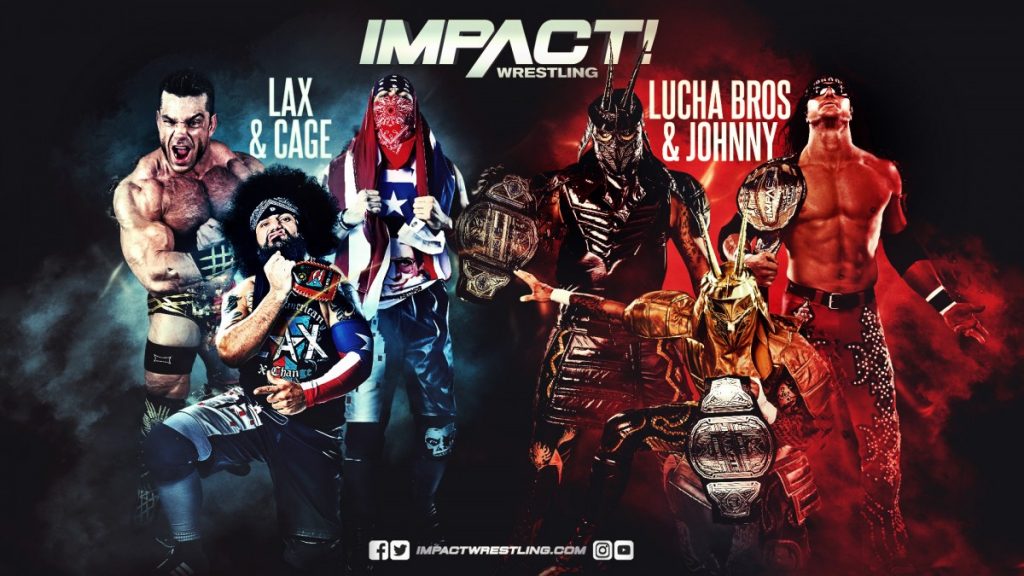 Eli Drake is in the ring to explain why he attacked his tag team partner Eddie Edwards last week. Eli says the old Eddie is gone and even he couldn’t get that version of Eddie back. Eli calls Eddie the weak link of their team and reveals he is in possession of Eddie’s kendo stick, Kenny! Eddie charges the ring and brawls with Eli! Eddie dives through the ropes to take out Eli on the outside. Eddie clobbers Eli with the kendo stick to the backstage area.

Ace flies over the top to hit Prince with a cutter on the floor!

Ace hits a modified swinging neckbreaker for a two count.

Prince avoids a top rope maneuver from Ace, allowing him to connect with a series of strikes.

Prince jumps off the top and plants Ace face first into the mat.

Ace counters the 450 splash into an armbar and delivers a sick a paper cut!

Ace hits The Fold to win.

After the match, Ace continues to beatdown on Prince until Petey Williams makes the save!

Knockouts Champion Taya Valkyrie brutally attacks Jordynne Grace at the gym before they meet at Rebellion with the title on the line!

Backstage: Moose, The North, The Rascalz

Backstage, Moose reveals The North as his new friends. Moose and the North attack the Rascalz, laying them out.

Rosemary vs. Undead Maid of Honor

Rosemary is in control early as she hits a Slingblade.

The Undead Maid of Honor turns it around with some unique offense.

Su gives her bloody glove to the Undead Maid of Honor but Rosemary spits green mist in her face, followed by the Spear to win!

After the match, Rosemary abducts the Undead Maid of Honor!

Rich Swann visits the oVe compound and reveals some secrets about his relationship with Sami Callihan. Swann calls out Sami but he’s nowhere to be found. Sami finally shows himself but only after Swann has left. They’ll battle for the X-Division title this Sunday at Rebellion.

Willie hits a big splash in the corner.

Willie connects with a Slingblade for a two count.

Kross avoids another splash attempt from Willie and hits an overhead throw.

Kross continues to pummel Willie but he won’t back down! Willie hits a German suplex but it has no effect on Kross!

Willie hits a Samoan Drop but Kross reverses the follow up Moonsault attempt into the Kross Jacket! Willie passes out, awarding the victory to Kross.

This is the IMPACT Wrestling in-ring debut of The Deaners!

Coleman and Abraham wear down Cody, preventing him from getting the tag.

Coleman and Abraham play to the crowd, allowing Cody to hit a double clothesline and tag in Jake!

The Deaners hit a devastating double team move to score the win!

Winner: The Deaners via Pinfall.

World Champion Johny Impact, Knockouts Champion Taya Valkyrie and referee John E Bravo are in the ring to address Lance Storm being named the special referee for Johnny vs. Cage at Rebellion. Storm comes out and tells Johnny that if he wants to beat Cage this Sunday, he’s going to have to do it fairly and on his own! Johnny puts his hands on Storm but Storm fights back with a superkick!

Pentagon takes out Cage but when he goes to tag in Fenix, Johnny gets between them and tags himself in!

Ortiz kicks Johnny through the ropes to the floor. Pentagon flies over the top, colliding with both Ortiz and Johnny on the outside!

Santana is next to fly as he hits a delayed Swanton to the floor!

Cage takes out everyone with a Moonsault off the top rope to the outside!

Fenix is last to take to the skies with a huge springboard corkscrew!

Johnny holds up Santana as Lucha Bros hit him with in-sync superkicks.

Johnny hits Ortiz with a 450 splash but Cage breaks up the pin attempt!

Cage is about to put Johnny away when Jon E Bravo pulls the referee out of the ring! Taya then attacks the ref at ringside!

Cage grabs Fenix but Pentagon clobbers him over the head with a steel chair! Meanwhile, we get a preview of Lucha Bros vs. LAX in Full Metal Mayhem at Rebellion as more weapons come out at ringside!

Johnny swings and misses at Cage with the chair. Cage hits him Weapon X to score the win for his team!